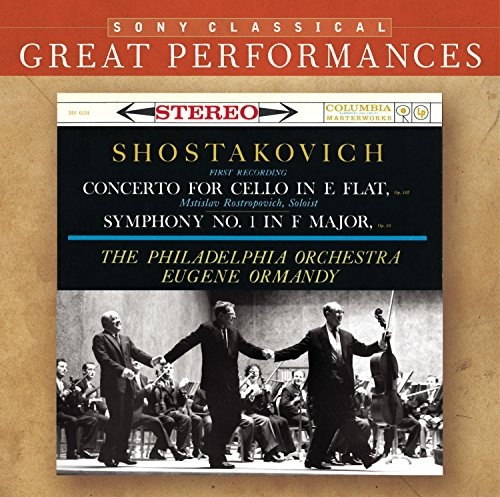 Sony Classical's Great Performances Series has scored yet another winner with its coupling of Shostakovich's Symphony No. 1 and the First Cello Concerto. Previously released individually, the close proximity in the recording dates of these two works (1959 and 1960) makes them a natural choice for a pairing. Continuing in the Philadelphia Orchestra tradition, the performance of the Symphony No. 1 follows the 1928 United States premiere of the work, given by the same orchestra and conducted by Ormandy's predecessor, Leopold Stokowski. Inherited from him is the notably lush sound of Philadelphia's lower strings, which capture the essence of Shostakovich's weighty harmonies. While his reputation is for performances that are clean, accurate, and not necessarily exciting, this recording crackles with nervous energy in a number of places. Some of the more rhythmic passages, though, are saturated with a sogginess that is especially prominent in the first movement. Nevertheless, Ormandysufficiently lightens up in the second movement for a crisp reading that seems to relish the delicate nature of the material. In addition, the versatile Philadelphia percussion section is captured with stunning clarity, helping propel Shostakovich's graduation piece to a blazing finish. The remainder of the disc is devoted to the First Cello Concerto, a more definitive performance of which simply does not exist. Dedicated to cellist, friend, and humanitarian Mstislav Rostropovich, Shostakovich was actually in the Philadelphia recording booth supervising this recording. Rostropovich's deliberate tempo in the first movement helps bring out the grinding, painful dissonances that appear under Shostakovich's gushing woodwind figures. Nothing more need be said about Rostropovich's performance -- you simply must hear it for yourself. Not always clean, not always clear, it is always one thing: gripping. Principal hornist Mason Jones complements Rostropovich perfectly, seamlessly matching his character. Sony's sound does contain a bit of tape hiss, but this is negligible; the thick, resonant bass gives the sound a firm foundation and is of a better overall quality than either of Sony's earlier releases. Anyone who is not a believer in the great emotional power of Shostakovich's works featured on this album will be made one after listening to these heart-wrenching renditions.