In 1982, David Bowie released In Bertolt Brecht's "Baal"; four years earlier, the prestigious RCA Red Seal classical label had Bowie narrating Prokofiev's Peter and the Wolf, and with his stint on Broadway as The Elephant Man, the artist stretched himself brilliantly. There is not enough spoken word by popular recording artists in today's world. Steven Tyler may show up on a Kerouac tribute performing one track; Grace Slick, Lou Reed, Peter Frampton, Marty Balin, and so many others have cut promotional interview discs for insiders, but it is surprising how the record industry has, for the most part, ignored this inexpensive and wonderful format to further endear artists to their fans. Jim Morrison's poetry, after all, was all that was left when Elektra published An American Prayer -- and that fans purchase low-quality bootlegs of many artists should have been a signal in the past to deliver this type of product to the marketplace. The scarcity of such projects makes Bowie's close to 30 minutes of narration that much more delightful. The Peter and the Wolf album is divided into two sides. The narration by David Bowie of public domain material originally written by Prokofiev takes up 27 minutes and eight seconds, while the second side of this green-colored vinyl LP has 17 minutes and ten seconds of Eugene Ormandy conducting Benjamin Britten's Young Person's Guide to the Orchestra with the Philadelphia Orchestra. Ormandy and the aforementioned musicians from Philly also back up Bowie on side one. This RCA Red Seal release includes detailed liners and the project, according to Mary Campbell's notes, is specifically geared to "introduce children to the sounds of the individual instruments in the symphony orchestra." Both Prokofiev and Britten wrote their respective pieces with this aim in mind. That makes this record all the more charming -- imagine what it could do if teachers would actually use it on a large scale to educate? As for Bowie's performance, it is splendid. He tells the well-known fable with his usual eloquence and style, and gives instructions at the beginning for kids to understand how the music corresponds to characters in the story. The accompaniment from the Philadelphia Orchestra is first rate, the lush sounds more exciting on the Bowie side than on Variations and Fugue on a Theme of Purcell, which makes up side B. Interesting how this project, if promoted today, could bring the name David Bowie to a huge audience of young people. A remarkable and well-crafted project. 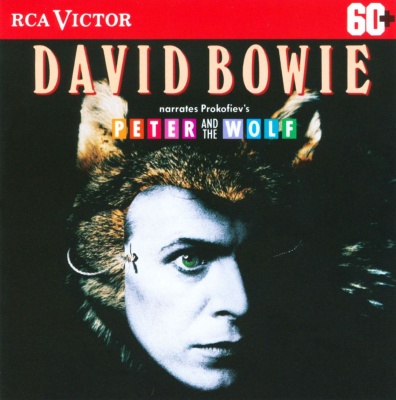