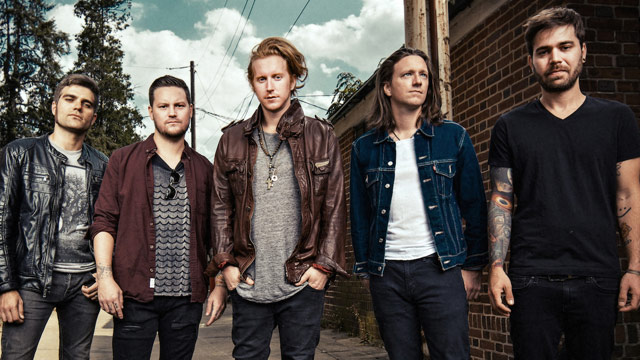 As Florida rock band We the Kings closes in on 10 years since the release of their self-titled debut, the band has entered into a frenzy of activity for the summer, highlighted with a busy schedule of shows on the annual Warped Tour and today's release of So Far, a collection of the band's hits and fan favorites. With the band spending so much time on their bus in the coming months, we thought we'd talk to frontman Travis Clark about what the members of We the Kings listen to together on the road, and ended up discussing both superstars and some local boys done good.

AllMusic: When a band transitions from a van to a bus, the concept of communal listening can go out the window. How does it work on the We the Kings bus?

Travis Clark: There’s definitely a sense of separation when it comes to the music. We have two totally different vibes between the front and the back lounge. The back lounge is where we try to keep a creative atmosphere, it’s where a lot of the songwriting will happen, and we’ll track back there. So a lot of times there’s no music playing, it’s more us actually playing ourselves and writing. When we’re not doing that, it’s very lighthearted music, easy stuff, good vibe music. When Jason Mraz put out the Love album, we had that on repeat forever, it was a very summery album. We’ll put on that and Jack Johnson, we’re from Florida, so we listen to a lot of beachy singer-songwriter music, where it’s more about the vibe.

The front lounge is where all the craziness happens. That’s by where you’d have sort of a bar, and the sound system is great, so we play all the loud music in there, that’s where we get pumped up before the show. We’re all kind of obsessed with Foo Fighters, and we’ll just have it up at 11, as far as the volume control will go, and we’ll rock out to the Foo Fighters before we go onstage, and afterwards we’ll play more hip-hop and top 40 music. Some nights we’ll have a 90s throwback with Blink and Green Day and Third Eye Blind and stuff like that.

AllMusic: Is there a specific era of the Foo Fighters you all agree on?

Clark: It’s all over the place. All five of us would probably say that we like different songs and different albums, that’s one of those bands that progressed in such a cool way and was always true to themselves and never really tried anything that would have offended anybody. Even Wasting Light, we were obsessed with that, even though a lot of their hits are from other albums. When you go through all their tracks that have been wildly successful, they weren’t one of those bands that was just about one or two songs on an album. Maybe those songs went to radio, but they could play a full album through and each song was amazing as the next. I always was inspired by bands that could do that, and that’s what we’ve tried to do.

AllMusic: Do you have a favorite deep cut of theirs?

Clark: There is a song on Echoes, Silence, Patience & Grace called “Stranger Things Have Happened,” and for whatever reason, I really like it. I’m not sure if I’m the guy who just tries to like things that everybody else didn’t like, where you want to feel like it’s your song, your band, and if that song had gone to radio I’d have been like, “No, that’s my song!” Everybody goes through that. For whatever reason, that song stuck out to me, and it wasn’t one of the popular ones, but it’s great. When we ask our fans what they want us to play, a lot of people will mention the deep cuts, songs we’ve only played a couple of times, so it’s always fun to see what impacts different people.

AllMusic: I learned that it's not too tough to blow out the amplifiers that come on those tour buses if you play White Zombie at maximum volume.

Clark: Ours was Darkest Hour for that. We were really obsessed with Undoing Ruin. Our first album came out in 2007, and their album came out a few years before that, and there was a time that I just loved everything that Victory Records was putting out. We would put that album on and go nuts, we were like, “We’ll never be that talented to play like those guys.” We have a pretty wide spectrum of music that we listen to, especially music that we get pumped up in between cities and shows and right before we go onstage. And the albums after that, especially The Human Romance, I thought that one was really awesome, it was very technical, and as a musician I really appreciated it.

Also, Underoath is from one town away from us. It was bands like Underoath and Copeland that came out of our area of Florida that we were like, “Oh my gosh, they did it,” they came out of their garages to play small shows, even though they were a different style of music than what we wanted to go for, they made it. So all we had to do was keep doing it, and it was such a motivator to see a band who you’d see at coffee shops and restaurants, and then when they made it, you’d say, “Oh, those normal people made it. We’re normal people, we can make it, too.” For us it was a turning point to see some of those bands make it out of our very small town and do their thing.

We the Kings are out on Warped Tour all summer.