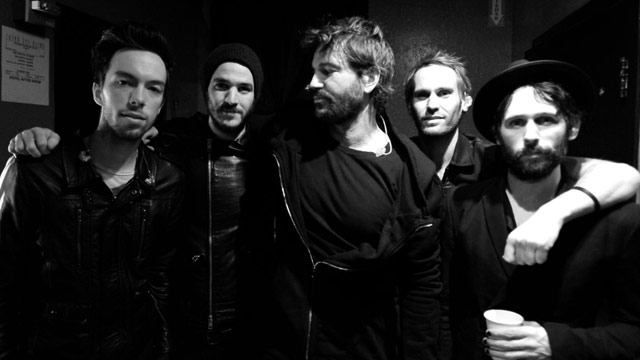 With an over 20-year career, featuring high points ranging from early hits like "Semi-Charmed Life," "How's It Going to Be" and "Jumper" to this summer's amphitheater-filling tour alongside Dashboard Confessional, Third Eye Blind has carved a career out of sticking to its hallmarks: respecting the strength of the pop music structure and the vocal hooks of frontman Stephan Jenkins.

Dopamine, the band's latest, came out this June, which editor Stephen Thomas Erlewine wrote features "insistent, surging, miniaturized arena rock," and its creation brought about much hand-wringing on the part of Jenkins, particularly in the lyric department. We talked to Jenkins about whether fretting over subtleties yields rewards, some of the non-musical influences on his performance style, and how opening for Oasis in 1996 put his band on a new course.

AllMusic: Now that you're five albums in, have you pinpointed your favorite part of the album cycle?

Stephan Jenkins: I don’t have one favorite part, but I have different parts where it’s a really, really happy thing. In the recording process, if I have the lyrics done, then I really enjoy it, but if I don’t have the lyrics done, I feel like a fraud. A song never holds together until all the lyrics are done, and then when they are done and I’m in the studio with musicians with whom I have a kind of empathy, there are moments where everyone puts down their egos, puts down whatever hat they’re wearing, and they go into an exploration and they do it without any sense of what the outcome’s going to be. They don’t go, “Is this too long, will this play on radio? How will this be perceived?” Those are the times where something really happens, and those are always the songs that become my favorite.

AllMusic: For some people, lyrics are just a melody delivery system, but the content seems really important to you.

Jenkins: When I was a little kid, I loved pop music, I loved pop radio, and I learned so much about song structure from it. But I always picked up the narrative aspects of songs, too, so a song like “Bohemian Rhapsody,” a line like, “Mama, just killed a man/Put a gun against his head, pulled my trigger, now he’s dead,” that just woke me up to what was going on. From a very young age, I could tell when things were trite. So I definitely care about the lyrics. But still, “Hit me, baby, one more time,” that’s amazing. It’s great.

AllMusic: What are some songs you can point to that have a perfect chorus?

Jenkins: “Umbrella” by Rihanna comes to mind. The first time I heard it I said, “Oh, it’s just perfect.” The interesting thing about Oasis is right when you think they’re at the chorus, they’re willing to go another step, and I love that. There’s a chorus, then it goes beyond that. To me, I can’t really write from structure, I wrote from a more emotional sense. I get a lot of criticism that my songs don’t take off until the very end. A song like “Wounded,” for example, it doesn’t really open up until the very end of the song.

We did our first big gig with Oasis. Nothing ever, ever happened for us, and then in one week, everything happened. I was pretty standoffish to the record industry at that point, and we went to New York and sat down with Dave Massey, and he started talking and there was this moment of chit-chat, about talking about something else, and I just didn’t have the patience for it, and I said, “What can I do for you?” And he said, “Well, you could sign to Epic Records, when can I see you play next?” “Well, you could have us open for Oasis, they’re on your label and playing in San Francisco next week.” And he looked at me like, “Who is this guy?” and then went, “OK, that makes sense,” and he put us on the bill.

We’d been playing the club scene for 60 people, and that would get us really stoked, and here we were playing for 7,000 people, and it was Oasis when “Champagne Supernova” and “Wonderwall” were just banging all over. In terms of America, it was their peak moment. And there we were, playing them in front of a big crowd in San Francisco, it was grand. Liam was ridiculous, he was totally being Liam, and Noel was great. I literally had bangers and mash with Noel Gallagher, that was a big deal.

AllMusic: Oasis and Third Eye Blind were two bands I couldn't escape when I was 13. What were you listening to at that age?

Jenkins: I was into Prince. I remember I heard Led Zeppelin, and the first time I heard them I thought they were scary, it was dark and exotic. That kind of stayed with me, although I don’t know how much those are influences. When I was 13 I saw the Rocky Horror Picture Show, and to this day, I think it’s amazing. I think the song “Get Me Out of Here” on the new album is kind of an ode to that. Tim Curry is a huge influence on me as a performer. If you ever see us live, I kind of take it upon myself to animate. My face is involved in whatever the emotional landscape of the song is, my face is in it, and that’s like Frank N. Furter.

Jenkins: Totally, totally. He and I have nothing in common whatsoever. He’s doing you a favor and I’m out there finding joy in it.

AllMusic: Along the lines of Tim Curry's performance in Rocky Horror, what are some other non-musical influences?

Jenkins: One definitely comes to mind, Frances McDormand, when she got her Academy Award for Fargo, she stood up and seemed like she didn’t know what to do with herself. “What is my mindset?” So she decided to swing her arms like a pimp, she had this bravado, and I thought, “Wow, this is great.” I loved that. Frances McDormand, another huge influence.

AllMusic: You've talked before about how some albums were difficult births and some came very easily. In retrospect, do you see any correlation between which of those turned out to be better albums in the long run?

Jenkins: No, and you’d think it would be that way, but it actually isn’t. Some songs were really easy, and those can be my best songs, but other ones were labored and took a really, really long time, and those were also some of my best songs. I don’t think that that’s necessarily a measuring stick. What I do think is, and what I’d say to songwriters, is that I do find that very often, that first impulse you have for the song is probably going to be the best. When you think you’re editing it, really what you’re engaging in is self-recrimination, which is not conducive to creativity.

AllMusic: So when you over-tinker, the results diminish.

Jenkins: You really can, you can tinker yourself right out of a song. You have to say, “This is a song that I’m not going to put judgment on at all, that’s a critic’s job, and I’m not a critic.”

AllMusic: And that's a lesson you've had to learn the hard way?

Jenkins:It’s not, I haven’t learned it, I keep learning. That’s not one I’ve cured myself of.

AllMusic: But at least you're aware of when you're doing it now.

Jenkins: Yeah, I scrunch my face up and just say, “Oh boy.”

AllMusic: When that happens, are you able to backtrack and get back to the core of the song?

Jenkins: Yeah, like on the new album, I wrote a song called “Everything Is Easy,” and I messed with it, I kept messing and kept messing with it, and Missy—who is kind of all things to our band, she runs the record label, she manages, she runs A&R, she’s like my big sister, she wears all the hats—she said, “Please, please just give me ‘Everything Is Easy,’ just the way you wrote it the first time. Turn the rest of it into another song, you clearly wrote two songs.” So “Everything Is Easy” is that song as originally written, every word, every note, it’s all the same, and then the other song is “Dopamine.” The two songs came out of the same thing, how about that?

AllMusic: You've also talked about your ability to procrastinate when it comes to lyric-writing.

Jenkins: It’s not procrastination in the exact sense, it’s like I’ll come up on a problem, like on “All These Things,” I wrote that track, but the chorus, just a couple of lines of the chorus, stumped me, and I kept coming back to them for years. If it’s the wrong word to me, I can’t do the song, so the song will sit on a shelf for two years, and I’ll come back to that place, and I won’t really exert the discipline to just muscle through it, I wait for some kind of inspiration that leads to the other 95 percent of the songs, that’s what I do.

AllMusic: And the band isn't lurking over your shoulder, pestering you to finish it?

Jenkins: They’re really patient, lovely people. I don’t know how they do it.

AllMusic: At the end of the new album, there's a short snippet of electronica as a sort of hidden track. Where did that come from?

Jenkins: That was with Ryan Rabin, and it was so fun. Ryan co-produced that track, and that was an example of, “We don’t have any rules, do whatever you want to do,” and we were just free-associating at the end of the track. It just made it onto the record.

AllMusic: Are there any other styles of music you're interested in exploring?

AllMusic: Do you want to get more into the production side of making music?

Jenkins: Yeah, I’ll definitely produce more records. Really what I’m about right now is Third Eye Blind, it’s such a fun time to be in this band and tour this summer, it’s been really exciting. It’s so gratifying, the way this album has been perceived. It matters to me, it does make me feel good to hear that people like it and that it resonates with them. We’re going to do more, we’re going to do an EP, it’s pretty much in the can, of songs that weren’t on the record, and there are like 45 songs that we wrote for the album that I want to find a new avenue to put out, I don’t want to put them out on LPs anymore, I don’t want to store them all up, put out an LP and do that standard process, I just want to start releasing them in some new way. But I do want to release them. So that’s where I’m at.