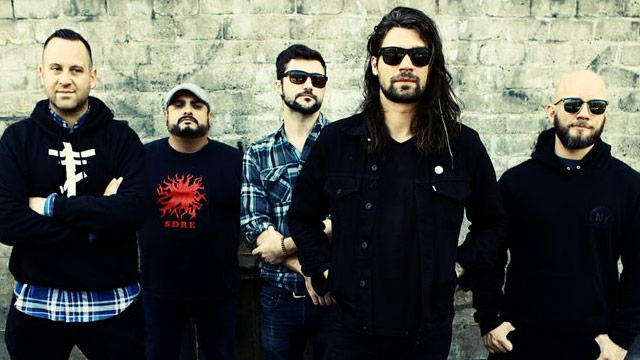 Now over 15 years deep into their career, Long Island rock band Taking Back Sunday has carried on as one of the more successful bands that came to prominence during the early 2000s wave of melodic, emo-tinged hardcore. They appeared as headliners at last year's slate of Riot Fest shows, and are currently supporting their latest album, last year's Happiness Is, on a headlining tour, with another two weeks of east coast dates coming up. We caught up with frontman Adam Lazzara to talk about chance meetings with musical heroes, what he thinks is a perfect song and the album he'd love to hear performed start to finish.

AllMusic: When you're on the road, how true do you find the cliche that it's 23 hours of boredom with one hour that makes it all worthwhile?

Adam Lazzara: That's very true on tour. You find stuff to keep yourself busy, but you spend all day looking forward to this short amount of time, and once it’s done it’s like, “Well, now what?”

AllMusic: After all this time, have you figured it out yet?

AllMusic: Riot Fest this past year was based on a bunch of bands doing albums all the way through. Which ones would you want to see?

Lazzara: Nirvana doing Nevermind all the way through would be so sick. I can not listen to that record for year and then put it on and still know every transition, every word. That would be cool. There’s the band Lifetime, they have a record called Hello Bastards that I really love, that would be awesome. That’s the record where I was like, “OK, I want to do that,” I’d like to see that. I was 14 years old when I first heard them and they changed my life.

AllMusic: How did you first hear about them?

Lazzara: A buddy of mine who was older than me, he let me borrow two records: Earth Crisis, Destroy the Machines and Lifetime, Hello Bastards. The Earth Crisis wasn't really for me, but Lifetime, that flipped some switch in me.

AllMusic: Did you ever get to do a show with them?

Lazzara: Yeah, it was really awesome, at Skate and Surf we were on the same day, so I got to see them.

AllMusic: Did you have a chance to nerd out on them?

AllMusic: What random encounters have you had playing festivals?

AllMusic: Is there a song that comes to mind when someone mentions the idea of a "perfect" song?

Lazzara: Billy Joel, “Piano Man.” Just a great fucking song. Any time it comes on, I always sing along.

AllMusic: Well, your band's from Long Island, so loving Billy Joel is mandatory.

Lazzara: No, I’m from North Carolina, I moved up. The other guys in the band love Billy Joel more than I do. I had that record on cassette when I was a kid, it had “The Ballad of Billy the Kid,” and going back, that’s a ridiculous song, but “Piano Man” is just tried and true, everybody knows it, everybody loves it.

AllMusic: Does the band make time to listen to music together on the road?

Lazzara: I remember when we were on tour with Frnkiero and the Cellebration and the Used, the Cellabration guys were hanging out with us in Grand Rapids and we were listening to that new Queens of the Stone Age record, which is great. It’s awesome, there are some sleeper songs on it, too, there’s one song that just sounds mean, and there’s one transition where he goes “Fuckin’ bon voyage” ["Smooth Sailing"], and the way he delivers it is…it has a slide guitar, it almost feels southwestern, in some parts. It’s a great record, and we were listening to that together that night. We often try to turn the television off and just have music on.

AllMusic: Is the music selection a democratic process?

Lazzara: Everybody’s real nice about it, and you can tell with the vibe what to put on. If everybody’s feeling sleepy, you’re not going to listen to Slayer.