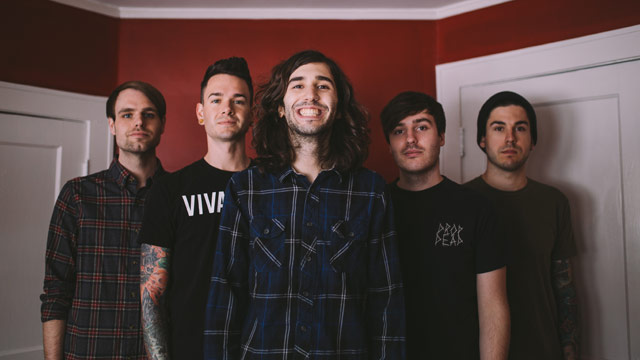 With today's release of their new album, The Home Inside My Head, Chicago's Real Friends continue to paint with the colors provided by their emo heroes of the late 90s and early 2000s. The band is gearing up for a summer out on Warped Tour, where they'll appear on a diverse lineup alongside bands like Whitechapel and Waka Flocka Flame. To mark the album's release, we called up the band's bassist and lyricist, Kyle Fasel, to talk about the value of welcoming the input of others, why "emo" doesn't have to be a dirty word, and why they're such happy dudes.

AllMusic: At this point has it sunk in that being in a band is "real life" or is it still a trip?

Kyle Fasel: This whole thing of what Real Friends is and what we get to do and our friends in bands get to do is still a weird thing to me. When you’re on the road, it’s really easy to get caught up in doing soundcheck and getting food and playing, and you don’t have time to sit down and take it all in. We’ve been home for a month and a half, and I wake up sometimes and say, “Wow, I get to play in a band for a living,” it’s still pretty wild to me.

Even with the record, that was another moment for me. We were out in California recording it, and I had a lot of moments there where I said, “This is crazy.” We don’t look at ourselves as some popular people or any sort of fame or whatever, we’re just five guys that play in a band, so sometimes it’s cool to think about it all, and I think there are some people that forget that. Three years ago, I was working a 40 hour a week job, and now I get to be in a band and do it, and it’s hard work, but I don’t think it will ever become normal.

AllMusic: It seems like being in California could lead to a lot of distractions.

Fasel: Honestly, being out in California made it easier to focus. We used to record with a friend of ours 40 minutes away, so any day that we’d record, when we were done, we’d go home and live our lives and go back the next morning. Being in California, that was the one reason we were there, was to record, so we strayed in a house 15 minutes away from the studio, and that was the number one thing, there was no distraction, “I have to leave the studio for this family thing or to hang out with my girlfriend.” We made a point to not make too many plans, because we wanted to focus on the record. We wanted to wake up and be like, “It’s 9 a.m., I’ll probably go to bed at midnight or one, and the only agenda I have is this record.” It was really refreshing to put that much time into it, we put probably three or four times the amount of record that we put into the last one.

AllMusic: What did you do with the additional time?

Fasel: It was the first time we did preproduction, having our producer pick apart the songs and try to make them better. We were in a room for a week playing the songs over and over, fixing things. Some songs stayed the same, sometimes we switched things around. Before, the people recording us had never heard the songs, we just went in and recorded them. We’d never had any outside opinions before. The last record, we wanted to do it that way, we wanted to make a point after signing to Fearless that we were still the same band, but this time, we did feel like we wanted to grow as a band and I think it shows on the record. I’ve never played music that much in a week, and we were all better musicians after that one week. My hands were hurting, but it felt good, we knew we’d just become a better band.

AllMusic: How did you guys handle outside input?

Fasel: We dealt with it pretty well. Before we went in with Steve we co-wrote three songs with Mike Green, who’s done stuff for All Time Low, Pierce the Veil and 5 Seconds of Summer, and we were kind of weirded out by that experience. We were more weirded out by the impression of it when it came up, but when we went and co-wrote the songs with Mike, it was awesome, we were like, “Wow, this is great.” So then we went and recorded two weeks later after we did the co-writes, so we were in a mindset of being very open to what people said. It was a big step for us, we never let anyone touch our music at all before that, or give any opinions. If you only do what you know and that’s it, you hit a ceiling. I feel like hearing pointers from someone like Mike Green or Steve Evetts, that really grew our band in the long run.

AllMusic: Have your musical references changed much since the band formed?

Fasel: I’m a big fan of a lot of the staple emo bands, like Jimmy Eat World, the Promise Ring, American Football, that kind of stuff, those are my main bands. I do listen to newer stuff as well, but I wouldn’t say that any of it really influences our music. I will say that even though there wasn’t any new influences, I think we became better at adding in more influence from the bands that we love. We turned a lot to Jimmy Eat World, we’d be like, “What would Jimmy Eat World do for this bridge,” or Saves the Day, “What would they do here?” I think we became better at adding more hints of that, at incorporating those more timeless-sounding influences to those songs.

AllMusic: "Emo" is a dirty word to some people, but you seem to have no problems applying it to your own band.

Fasel: I think that was more of a hit from normal people, I’ve always hung out with more alternative-minded people, my thing in high school was being in a band, that’s what I did, so I think the whole making fun of emo or calling someone emo, at least with me growing up, was more something that a jock would say, or someone that doesn’t really understand what the word even means, using it like how people would say “scene,” how it was about guys wearing eyeliner and girls’ pants and stuff, more of a goth-y sort of thing, I think all those words got tied into each other from normal people that weren’t in the circle and had no idea who American Football is or Sunny Day Real Estate or what emo actually means. That’s how I feel about the negative way of looking at it.

AllMusic: Scrolling through the lineup on the Warped Tour site, most of the bands seem to have scowling, super-serious press photos, and your Instagram seems to be exclusively pictures of you guys smiling. Are you just upbeat dudes?

Fasel: It’s not really something we try to do, we’re all older, in the sense that there are bands that are doing what we do and they’re 20, and we’re in our mid to late 20s, so I feel we’re just true to who we are, we don’t get too caught up in what people want us to be. I know some bands get caught up in what record labels or management think, but we’ve always been who we are, and I think that comes with a carefree attitude of, “We’re happy because we don’t do anything we don’t want to do,” and I have friends in bands that do things they don’t want to do because that’s what they think they’re supposed to do. With us, we’ve always had a very positive vibe around us, even on tour or doing anything, we just stay true to ourselves.

AllMusic: You can take yourself seriously without being somber.

Fasel: We take the band very serious, but we’ve had opportunities come up that some bands might think are really good opportunities and we might say, “That doesn’t really fit us, it doesn’t feel right.” In the long run, that kind of speaks a lot, because it’s not only bands, it’s easy to compare a guy that dates a girl and he turns into what she wants him to be, and two years later he’s unhappy. That’s a common thing that happens with bands, we’ve never fallen into that, we’ve always said, “Hey, this is who we are, we’re just some guys,” and I think that has something to do with us being able to do this, is there’s no bullshit.

That’s how the bands were when I was growing up, and I always respected bands like that. Jimmy Eat World was just some guys, even Taking Back Sunday and all those bands, none of them were trying to put on this fashion show or this big façade, it was always people in bands. I think we try to keep that mentality, and a lot of bands do, but I look at it as more of an old school mentality, not trying to conform to what a record label wants you to do or a manager or whatever. We have control over what we do, every part of it, so I think that adds to the positivity.

Real Friends will be on the Warped Tour all summer, bookended by international dates.

Chris Jericho On His Early Music Memories, His Indoctrination Into Metal and…

Chris Jericho On His Early Music Memories, His Indoctrination Into Metal and…