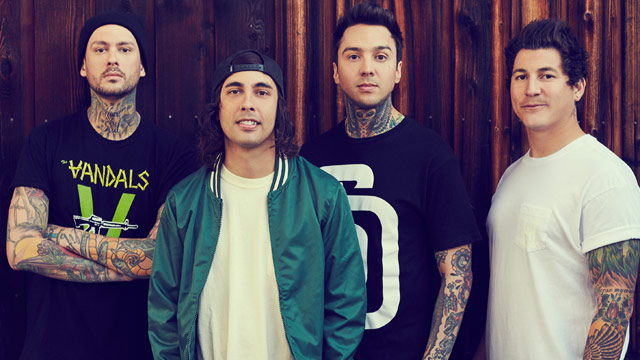 With 10 years, four albums and an extensive touring history under their belt, San Diego's Pierce the Veil have emerged as one of the most popular bands from the melodic hardcore scene of the late 2000s. Formed by brothers Vic and Mike Fuentes, and joined by Jaime Preciado and Tony Perry on bass and guitar, they've been blending pop-punk hooks with aggressive outbursts and sunny SoCal swagger since 2007's A Flair for the Dramatic.

Today marks the release of Misadventures, Pierce the Veil's first album in four years. The band will be hitting the road in June, and has promised full performances of Misadventures, which suggests an especially high level of confidence in the new material. We talked to frontman Vic Fuentes about why he spent so long on the album's lyrics, albums he has to listen to from start to finish, and how their dedication when forming the band may have scared off some less-desirable candidates for the gig.

AllMusic: It takes a special kind of confidence to play a brand new album start to finish on tour.

Vic Fuentes: We wanted this first tour to be something super special, something that wasn’t like a normal tour. We’re going to be doing a ton of touring, and we wanted to come out with something different and unique, so we wanted to put on a once in a lifetime show for our fans. We toured so much on our last record, like four years, and it feels like it’s the right move to come out and play a lot of new songs.

AllMusic: Most bands seem do it as a legacy kind of thing, not with new albums.

Fuentes: Yeah, and I’m surprised more bands haven’t been doing it. I was talking to my dad and he said bands used to do it all the time back in the seventies, when Led Zeppelin would come out with an album, they’d go out and play it.

AllMusic: As a kid were there certain albums you had to listen to all the way through?

Fuentes: I remember one of the albums that flowed the best for me was Let’s Talk About Feelings by Lagwagon, that really flowed together. NOFX did an album called The Decline that never stopped, it was an EP that was 20-something minutes long, and it separated in tracks, but when you listened to it as a whole, it was one long song. I think that stuff’s fun.

AllMusic: You had four years in between records, while some of your peers are able to crank them out every year. Were you intentionally working at a different pace?

Fuentes: I wish I could pump out records every year, but I think every record is different for us, we set out with a plan, and nothing ever goes as planned. This record in particular went fucking crazy out of control, to the point where I was traveling all over Southern California, then up to Seattle, searching for the songs and trying to make sure each song had a good story. When we were in the studio, we took a break to go on a world tour in the middle of recording, because I felt at the time that I didn’t have the ideas, didn’t have the stories, the things that were making me want to write songs. I wanted each song to have its own story, like we have in the past, and I think that’s important. I waited and came up with some really meaningful stuff that meant a lot to me.

AllMusic: Were the other guys getting impatient?

Fuentes: They’re never like that, they’re always really supportive, I think they have a lot of confidence in me as a lyricist, they just know that I’m going to get it done. They never said a word, you get that from an outside perspective, people outside the band trying to set deadlines and things, and we can never meet them.

AllMusic: You've managed to keep the original lineup together, which has to be gratifying.

Fuentes: We’re proud of that, that we haven’t changed members or anything, I don’t know how it happened, we got really lucky. It helps that my brother is the drummer, we’ll be playing together forever. When we started the band, we told everyone who tried out, “You have to be ready to make music your life, we’re going to be touring like crazy and making records for the rest of our lives, this is what you’re signing up for,” and they were totally on board, they wanted it. That was our understanding from day one, so that has helped guide us.

AllMusic: Did that focus scare anyone off?

Fuentes: It scared away our old band members who are no longer in the band anymore, from when we were a band called Before Today, that’s what we signed to Equal Vision with, we put out one album and the other guys just wanted to party and find girls every night, they didn’t care about the music, they did it for the experience and didn’t put any effort into the music. They just didn’t want to do that, so that’s what caused us to be so strict about finding guys that were passionate about music.

AllMusic: Who are some artists that you love now that you either weren't aware of or didn't exist when the band started?

Fuentes: Bands that we tour with inspire me, like Letlive, I think about their singer when I’m writing stuff, because he’s so energetic and puts his whole body into it when he sings, I think about stuff like that, or production-wise, I listen to a lot of current music like the Weeknd, groups that are pushing the boundaries of different sounds and coming up with new production ideas, I love staying on top of stuff like that.

AllMusic: The song "Gold Medal Ribbon" stands out a lot on the record, especially the instrumental intro.

Fuentes: It sounds like a John Hughes 80s movie intro. That was definitely the vibe that we were trying to capture for that. We were just having fun with that sound, and it was some random thing I was writing one day, and I just kept going with it. It was really fun, it was cool to bring in our piano player, who has played on all our records, any time we need keys or organs, and I think he helped out that intro. It was cool and set a different vibe, it kind of splits up the album a bit. It was a weird random branching-out thing that we like to do every once in a while.

AllMusic: When you first started playing music, did you consider yourself more of a singer or a guitar player?

Fuentes: 100 percent guitar player, for sure. I still think of myself that way. We write all the music first, it was so weird, because this record was done over a year ago, musically, and I had the entire thing on a silver platter, just waiting for my voice on it, but like I said, I was really looking for good lyrics, so I waited and took my time. Writing guitar riffs, that’s what comes naturally.

AllMusic: Have you made any surprising friends through music?

Fuentes: Yeah, I have John Oates’ number in my phone, I interviewed him for a feature in a magazine, it was like a dream come true. They asked me, “Who’s your rock icon?” and I was just joking, the first thing that came to mind was Hall & Oates, because I love Hall & Oates, and then the next day, our publicist called me and said, “John Oates is totally into the idea,” and I was floored, that was amazing. Me and my best friend were Hall & Oates for Halloween, we did an impromptu music video, which I showed to John Oates, and he said, “You do a good 80s me.”

AllMusic: Did you and your brother share most of the same musical interests growing up or did you split off?

Fuentes: We have a lot of different musical tastes, but at the end of the day, the most fun stuff for us is what we grew up playing in high school, which is really fast, aggressive stuff, especially for my brother, who’s a phenomenal punk drummer, he’s so fast and tight, so a song like “Texas is Forever,” that’s just featuring my brother, because he’s such a maniac.

AllMusic: Is there a style of music you love that you'd never try to perform yourself?

Fuentes: We kind of go out and actually do a lot of those things, like I love flamenco Spanish guitar, so every once in a while we’ll bust out into that stuff. I’m trying to think of what we should just not do – I should probably never rap on a song, I can say that confidently, that no one wants to hear me rap. I can sing entire Snoop Dogg albums, but I’m not going to be doing any of that. I was actually at a studio called the Village in L.A., and Snoop was working downstairs, and next to him, Busta Rhymes was working on something else, and it was so funny, they had to air out the studio for like two days for obvious reasons.

MIsadventures is out today on Fearless Records.