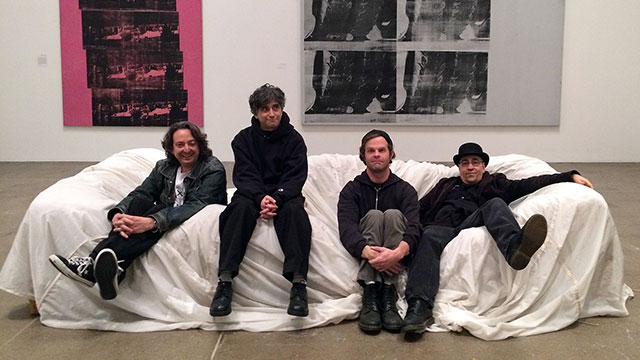 Since 1983, Pennsylvania-based band the Dead Milkmen made a name for themselves by incorporating humor and a charming amateurish ethos to their poppy brand of punk rock, notably with their hits "Bitchin' Camaro" and "Punk Rock Girl." The band was intermittently on hiatus from 1995 to 2008, and the reformed band has so far yielded two new albums, 2011's True Detective-preceding The King in Yellow and this year's Pretty Music for Pretty People, which features the delightfully-titled track "The Sun Turns Our Patio Into a Lifeless Hell." We have the exclusive premiere of the song's video, filmed in an eerie silent film style that reflects the song's somewhat jarring tone. We also called up Dead Milkmen drummer Dean Sabatino, aka Dean Clean, to talk about the inspiration for the song and video, why the concept of social media wasn't daunting when the band reunited, and what keeps being in a band interesting 30 years on.

AllMusic: The video definitely has its own style, what were the ideas behind both the video and the song?

Dean Sabatino: The song was inspired by the SunSetter Awning infomercial. Rodney watches a lot of TV, especially late night TV, and it’s this infomercial where a couple has an awning on their patio, and that inspired the song. The video was inspired by old silent German expressionist films, like Dr. Caligari and other things like that, maybe even a little David Lynch thrown in there, as well.

AllMusic: And the song itself is pretty intense, it's not as upbeat as some of the band's material.

Sabatino: It’s a pretty heavy song for us, I think it’s one of the heavier tunes we've ever done. We all have very wide ranging musical tastes. Rodney is into a lot of industrial and maybe heavier type stuff, he brings that to the table, and he plays keyboards much more than he used to, so that flavors that now, and we have the new input from Dandrew [Stevens], who’s now playing bass, he has his own twisted sensibility. It’s cool, the mix is fresh again. We’re pretty flexible, it’s not like we set out to write a funny song or a humorous song, there’s some pretty dark stuff on the new record, but maybe it’s couched in a bit of humor or some satire. It’s just our chemistry, it’s the way it works out.

AllMusic: What influences are you bringing in these days?

Sabatino: I tend to have more indie rock, pop leanings, that kind of stuff, I don’t know how that translates to Dead Milkmen music. A few of the songs on the new record where I had heavy input were “I've Got to Get My Numbers Up” and I wrote the words for “Somewhere Over Antarctica.” It’s interesting to have it be more collaborative, we can do our own demos and share them on Dropbox, and then somebody might add another part to the song, and when we get into the studio it can change more from there, so it’s fun that way.

AllMusic: When the band came back in 2008, you suddenly had a lot of new things to contend with, like social media. What was the adjustment like to that?

Sabatino: In some ways it’s easier and in some ways it’s harder, because there’s so many more ways to interact with your fans, which is cool. We always did interact with our fans, we had a newsletter back in the day where we’d send it out snail mail style. At one point we had 10,000 people on our mailing list back then. Now with the click of a button you can do that online easily.

AllMusic: The band formed over 30 years ago, what about the way the band operates now are you most excited about?

Sabatino: The collaborative songwriting is cool now, and being able to play shows, we've been playing again since 2008, and seeing a mix of fans, we have some loyal, die hard fans, which is cool to see, who are still coming to the shows now and in some cases bringing their kids, so that’s cool. The mix of people who are still into our music and still interested is nice to see.