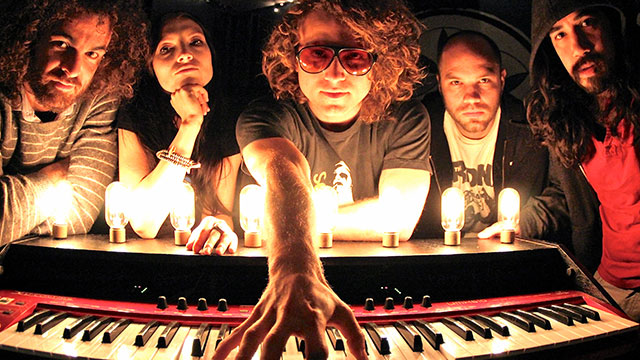 ​Southern California five-piece the Burning of Rome gets frantic in this fast-paced video for the track "Melina" from their latest, Year of the Ox. The record was produced by Paul Leary of the Butthole Surfers, whose freaky video projections and light shows employed in the band's early days are recalled here. "Melina" also features guest drummer extraordinaire Josh Freese.

Burning of Rome frontman Adam Traub passed along his thoughts about "Melina" and its musical references.


"Melina" is a little more light-hearted. It's more of an homage to the 1971-era music put out by Sparks and pre-ambient Brian Eno's Here Come the Warm Jets. The song is a nonsensical anthem for all of the stray cats that wander into our shows and unleash debauchery on the dance floor. There's always at least one person in the crowd that doesn't give a fuck if the whole room is standing with arms crossed, pressed like wallpaper to the back of the venue. They're there to boogie and let go, and damn everyone else, they do just that. "Melina" is the embodiment of that personality we see time and time again at our shows. The brave souls who are fearless in letting their freak flags fly and dance until dawn at a TBOR concert.

For more on The Burning of Rome, visit their site.

Video Premiere: Thomas Giles (Between the Buried and Me) - "Siphon the Bad B ...

Video Premiere: Thomas Giles (Between the Buried and Me) - "Siphon the Bad B ...