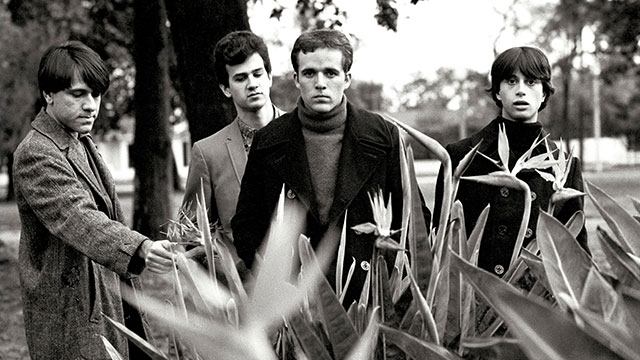 MN0000571806
This time on the Poplist we’re lucky enough to have a list from the Three O’Clock drummer Danny Benair. The band just reunited after many years apart, and Omnivore released a hits and rarities compilation this week. It’s called The Hidden World Revealed and if you have interest in psychedelic pop from any era, it’s well worth picking up. I’ve been a fan for longer than I care to tell you about, and their debut album Sixteen Tambourines is constantly floating around the fringes of my personal top ten list. I love the songwriting, the perfect modern (for 1983) update of pop psych, and the impossibly twee vocals of Michael Querico (which I would argue are not actually twee, but somehow soulful, and affected my view of how a male lead singer could actually sound back when I was an impressionable youth.) Their Baroque Hoedown EP from the year before is also quite amazing, and the albums they made after 1983 are quite good, too. Let’s just call them one of my favorite bands ever and move on to a couple videos before we get to Danny’s list:


Dogs
Let's face it, my life would not be anywhere near the same without Baby, our French Bulldog. She is the boss.

Music: Latest fave is “Shelter Song” by Temples. Modern pop psych out of the UK.


Food: 101 Coffee Shop, Hollywood
Danny the manager is the best! I even have an item that he keeps especially for veggie BLT. Woo and a hoo!

Books: Are We Still Rolling? by Phil Brown
UK Engineer who as a teen was working with Traffic and the Stones. Good insider stories.

Films: Headhunters
Crazy Norwegian film that starts with art theft and, well, just see it! Probably will be re-made as bad US film. Read the subtitles - you will stay awake!