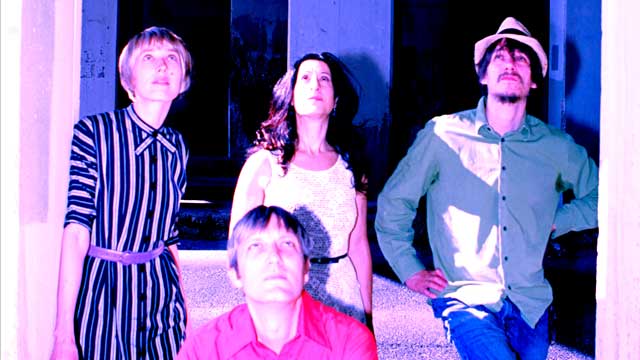 The Starfolk is a new band that’s releasing their first, self-titled album next week on Korda, the Ocean Blue’s label. The people behind the music aren’t all that new, though. Guitarist/vocalist Brian Tighe was in the under-rated indie rock group the Hang Ups, he and vocalist/bassist Allison LaBonne featured in the excellent chamber pop group the Owls. Joining them now are cellist Jacqueline Ultan and drummer Stephen Ittner, who was also in the Hang Ups and the Owls. The music they create as the Starfolk splits the difference between the fragile sweetness of the Owls and the guitar heavy crunch of the Hang Ups, and it sounds great. Both Tighe and LaBonne are fine writers and singers, and the album has a lovely depth and melodic richness. Check it out when it’s released next week. While you wait, here are some of the duo’s favorite songs and a video of a song from the album:


Brian Tighe's picks
Dinosaur Jr. – “In a Jar”
My first experience with Dinosaur Jr. was via a low quality cassette tape my bandmate Stephen gave me when we started playing music together in the Hang Ups. I had to listen through a thick layer of tape noise to hear music that was already encased in layers of guitar distortion, but beneath all those layers there was something magical. I imagined the band more as creatures than actual people, the sound was so otherworldly. In fact, in this song J. Mascis seems to be singing from the point of view of some kind of animal who can only communicate by licking the subject’s hand. His voice sounds completely fried and worn down, but it works so well with the music that the overall effect is hugely original. J’s guitar work and Lou Barlow’s bass playing are incredibly dangerous throughout the song - check out the guitar solo that breaks free after the bridge at 2:17.


Jim Croce – “Operator”
Our friend Jim from Jim Ruiz Set drew our attention to this classic Jim Croce song when he did a solo cover of it, and when I taught songwriting a few years back, I used it as an example of well-crafted lyrics. The point of view, where the singer addresses a telephone operator and uses this typically anonymous interaction as a launch pad to tell his personal story of heartbreak, is very effective. And this simple live performance lets the heart of the song shine through:


Sentridoh – “None of Your Goddam Bizness”
What makes this song so original is the way it messes with the listener - it simultaneously pulls you in and pushes you away. In the verses, Lou Barlow’s lyrics welcome you in with powerfully detailed vignettes of his childhood and of his father, which alone would’ve made for a great song. But where does he go with it? There is a slight shock to the system when he wraps up each verse with “None of your Goddam Bizness” as if he suddenly feels that he’s revealing too much, letting the listener in too close. The kicker is that Lou somehow reveals more about himself by doing this - he betrays a layer of vulnerability that makes the song even more emotionally charged.


Allison LaBonne's picks
Dear Nora – “The Lonesome Border Pt. 1”
We discovered Dear Nora (Katy Davidson) while on a west coast tour with our band the Owls. We listened to her record Mountain Rock for the first time crossing the Golden Gate Bridge on our way to play a show with Dear Nora, but it wasn't until lingering on the record for a few more days in the van that the magnitude of the discovery fully set in. Davidson's songwriting is vulnerable, intimate, dreamy, melodic, raw, capturing everyday moments and emotions with great humor and poignancy. Years later when I was playing Mountain Rock in my car, my sister asked "are these demos of your new music?", which I took as a huge compliment.


The Glands – “Mayflower”
The Glands were the first band I thought of for this piece because they are such a grossly under-known band in light of the captivating records they have put out. I had the toughest time choosing a song, not only because I like so many, but because the power of their songs is cumulative and best experienced within the the full album context. In the end, this spaced-out droney number “Mayflower” won out. I am immediately entranced by the sonic landscape and strange harmonies. So cool.


El Perro Del Mar – “I Was A Boy”
El Perro Del Mar is a peculiar flavor at first taste. She can tend toward the maudlin, with repetitive lyrics of almost absurd simplicity. But as she repeats these simple phrases in her vulnerably soulful voice, the songs take on the quality of a meditation and I suddenly feel she's inviting me to commune profoundly with her inner world. I love how this simple video for "I Was a Boy" captures El Perro (Sarah Assbring) addressing the listener in her distinctively candid way. To me, the song expresses how meeting one person can utterly transform you.