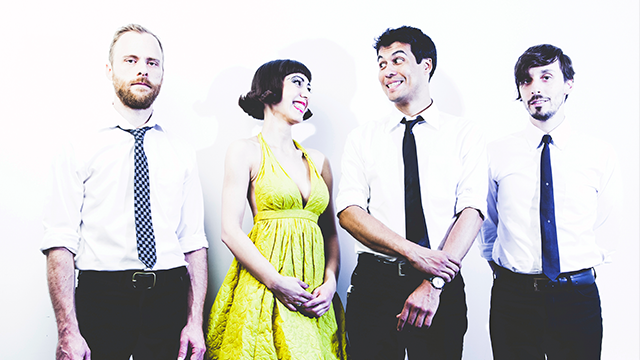 One of our favorite Austin, TX bands the Octopus Project just released a new album, Fever Forms, this week, and we thought it totally made sense to find out what the members of the group are into lately. These are five things we are into about the OP: their madcap exploration into the sounds synthesizers can make, the sunnily jubilant melodies most of their songs exude, the amazing collabo they did with Black Moth Super Rainbow (The House of Apples and Eyeballs) a few years ago, their visual style, and now this new album. Fever Forms is their most straightforward and pop album yet, featuring more vocals than ever, but never losing the almost giddy experimental feeling that makes them so much fun to listen to. Here’s a video for a song from the album and then, Toto and Josh, you’re on:


Toto:
Ilaiyaraaja
We're big fans of Indian movie music all around, but lately I've been feeling this guy's stuff in particular. It comes from an especially unhinged electro/disco/everything zone. This tune is pretty unstoppable:


Richard Devine
Saw him do a modular synth performance recently - totally mind ripping. Absolutely see this dude play if you get a chance... it was like a drum solo from the 36th century. This video doesn't really represent a performance -- the show kinda sounded like this sometimes, but seeing him navigate a crazy synth rig through a super diverse range of sounds kinda gave me vertigo. Awesome sonic vertigo.


Adventure Time
It's the best cartoon. Not sure what to say about it, except that at their best, they nail a really specific, satisfying tone between sweet and insane.


Jaime Zuverza
A badass artist here in Austin who we're lucky to count as a friend. He's been totally destroying with show poster designs lately, and makes amazing music with the band Hidden Ritual - highly recommended!

Josh:
Toys & Techniques
This is the raddest blog around. It mainly focuses on art/books/movies/music/design/amazingness from the 60’s & 70’s, and pretty much everything they post is incredibly inspiring. Whether it’s a forgotten Bulgarian 7”, a book about creative games for kids, or even just a post about remodeling their bathroom -- it is all awesome. Occasionally, they/he (I think it’s just one dude?) will post mixes, and I’ve listened to every single one about a million times. I can’t recommend this blog enough.

Podcasts
Hey! Everybody loves podcasts! I’m sure these are probably not that new to a lot of folks, but a couple of our tour staples are Radiolab and Bullseye. I couldn’t imagine being on tour without listening to either of these. Radiolab is all about science and life and people and beautiful stories about how all of these intertwine. We were lucky enough to have a few songs used on an episode a while back, and I definitely consider that one of my personal career highlights. Bullseye is another podcast I can’t live without. Each week the host, Jesse Thorn, interviews people from all over the spectrum of popular culture -- actors, musicians, comedians, filmmakers, etc. The thing that really gets me about this show is the depth as to which Jesse goes with the interviews. They feel like natural conversations, and without fail make me like the person being interviewed 1000% more. Not that they are uninteresting people to begin with... Many times they’re either folks that I hadn’t heard of, or hadn’t thought about in a while (Huey Lewis, Dolly Parton), and listening makes me just like human beings more.

Fancy Drinks
Yeah, yeah...I know mixology is a big trend these days, but you know why? BECAUSE IT'S AWESOME!!! I highly recommend The PDT Cocktail Book, written by a bartender at a bar in NYC called PDT (Please Don’t Tell). I’ve never been there, but this book is full of so much awesome information and fantastic classic and new cocktail recipes. There are also some pretty amazing bars in Austin with folks making tasty concoctions, and I feel incredibly lucky to be able to sample the fruits of their labor -- specifically Midnight Cowboy. Making weird drinks for friends at home is also a blast! My favorite cocktail to make right now is called a New Old Fashioned:
2 oz TRU organic gin
¾ oz FRUITLAB organic orange liqueur
1 raw sugar cube
4-5 dashes BAR KEEP organic Chinese bitters
Shake and strain into coupe

Austin Food
I love our city. People here are so friendly and excited about making things -- music, art, movies, etc. Awesome food is what everyone is freaking out about right now. I feel like it all started with a sushi restaurant called Uchi and its owner, Tyson Cole. I’ve eaten at a zillion places all over the world, and Uchi is still my favorite restaurant. They have a sister restaurant, Uchiko, which is equally as awesome and kickstarted the career of Top Chef winner Paul Qui. Paul runs a series of food trucks called East Side King (which will knock your socks off), and just opened a new brick and mortar restaurant aptly named QUI. There are about a billion other outstanding food spots in Austin, but I feel like Tyson and Paul just keep raising the bar and forcing everyone else to catch up.