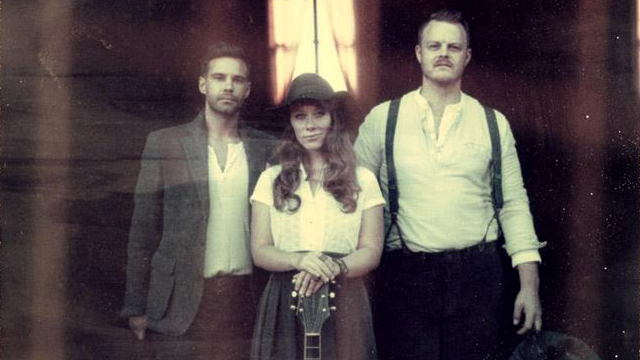 The Lone Bellow bill themselves as "Brooklyn Country Music" and their self-titled debut album from earlier this year shows that they ain't lying. Lead singer and guitarist Zach Williams, singer/mandolin player Kanene Dohehey Pipkin, and singer/guitarist Brian Elmquist came up with a hauntingly emotional batch of tunes and play them with an autumnal grace and richness. Alongside the country sounds, the trio mixes in gospel, soul and indie rock influences, and deliver their songs with energy and soul. It's an impressive debut and we're happy to have a list from them.

First, here's a beautiful acoustic version of a track from the album:

5 live and live-ish performances that inspire us....
Bill Withers - "Grandma's Hands"
We like how Bill Withers seems to be passing down an idea/way of life through this performance. It's inspiring to see his humility in explaining the meaning of the song.
[/youtube]

Les Paul and Mary Ford - "How High The Moon"
Even though the music isn't exactly live, their magnetic charm performing together is undeniable. Les Paul invented the electric guitar and multi-tracking, and Mary Ford pioneered layering vocal tracks. Somehow this duo always sounds refreshing. Plus, in some videos she plays electric guitar in a sweet '50s house dress.


Ray Charles and Willie Nelson - "Seven Spanish Angels"
To us, this song represents the perfect collision of country and R&B using the platform of a story song. Same spirit, different voices.


Thad Cockrell - "Rosalyn"
This performance is visually captivating and well-recorded. It shows the value of making music in collaboration with all kinds of creative people; not just great musicians, but also great videographers and producers. We love the line in the song, "no matter how small the flame, against the darkness don't you know the light will win."


Bernard "Pretty" Purdie 16th note shuffle
Besides being a legendary Motown drummer, Bernard Purdie is such a boss. It is truly inspiring to see him remember tiny moments in his creative life that shaped modern drumming. And, his enthusiasm is contagious.