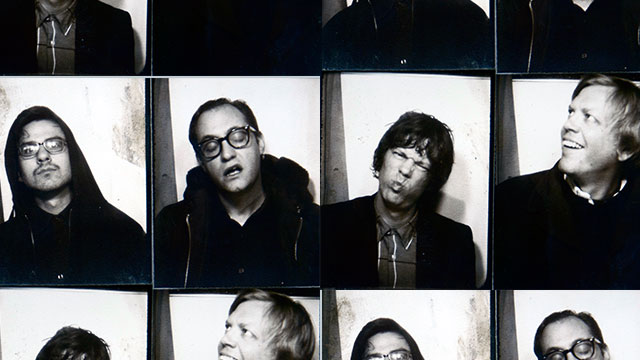 Emmett Kelly’s The Cairo Gang released a really good self-titled album back in 2006, then hooked up with Wild Oldham to make some good records, and then released another fine album in 2012, The Corner Man. British folk and folk rock-inspired, idiosyncratic, pleasingly ragged and melodically rich, the band always sounds loose and alive, and Kelly’s songs have a near-mystical lyrical depth. He sings those non-folky folk songs in an intimately beautiful voice that will have you inching toward your speakers to catch every breath. A new EP, Tiny Rebels, is out next week and is well worth checking out. Kelly was kind enough to send us a list of “songs have something to do with Tiny Rebels, and the process that which it sprung...”


Big Star - “Femme Fatale”
I've listened to Big Star's first two albums marginally for around like five years. I never fully got into them. Of course, there are the few songs, and I always loved large parts of what was going on, but nothing ever fully grabbed me as a whole. This was until I heard this version of "Femme Fatale". I was stunned at it. And even more stunned when I found out it was Big Star and that there was this whole other record I was missing (3rd). Somehow I had overlooked it. Since then, I got the record and have listened to it over and over and over again. There isn't one part of it that I don’t love its weird reading about it, because obviously it was a strange time for Alex Chilton and Jody Stephens. It seems as though, from what I read, that this wasn't even conceived as a Big Star project. Half of the band's main songwriters left. What came out was this amazingly creative and powerful and fragile album.. It also got me feeling really good to hear them cover this song. I've always loved this song and I've been thinking a lot about doing covers lately. Songs are and once for sure have been things that people know and love collectively. At some point, it became sort of taboo to cover something that was well known. Now the only way that someone can cover a song is if it is some obscure thing that shows that you have this vast record collection. In a way you are claiming the song in its obscurity for yourself. This, I think, is weird. I miss hearing lots of people sing the same song. I'm still gathering the courage to break through this wall myself. But I feel like it’s important to sing songs and to keep them alive. And just because they're well known songs doesn't mean they should die in the past.


The Nerves - “When You Find Out”
I went to see Peter Case play at the Empty Bottle in Chicago. I'd seen him play a couple of times in California. He normally does this pretty good solo act, sort of along the lines of the wayfaring singer/songwriter. I dig it, but it’s not my thing, you know? When I saw that he was playing at the Bottle, I was curious because it just didn't seem like the place for him at all. The show ended up being him doing a tribute to his bands the Nerves, the Breakaways, and the Plimsouls. He got this garage rock band from Wisconsin to be his band, and they were amazing, totally high energy and infectious. I was blown away. I bought a copy of the Nerves LP from him after the gig and have listened to it so many times. I became completely obsessed with the beat on all the Nerves and Breakaways songs. It’s not on this song, however. This song is just one of those perfect songs. But the beat being straight eights on the kick drum, so badass. I've been practicing it almost daily since then. How Paul Collins could do it the way he did is beyond me.


The Mekons - “Hello Cruel World”
It’s a battle scene everywhere. No one is safe. The city is a pile of garbage that we've all been fool enough to be drawn into. And we bitch and moan and look for goodness. Drunk and aloof, attempt to find truth and love. Honesty. How did I end up here? What's next? What have I got to be prepared for next?? Some new bit of disappointing information about that other fair-weather pal who tossed his soul into the toilet. Some chick has her head so far up her arse that she's suffocating and needs to be entitled the freedom to breathe as she pleases. Is there oxygen up there?? What will please them? What pleases us? I always think of Billy Pilgrim watching the crowd, escaping bewildered and floating. Tragedy and relief. It really can’t get any more fucked than it is now, right? Here we are, free to leave, and we are dying of starvation or have lost our minds... stepped on a land mine. Got yr legs blown off. Yr heart ripped out. The hearty are weak. A heart is good eating for dogs.. Best use it as a diversion. See a heart dangling by a thread. Come and get it, you vultures! Try moving closer. Come in closer. Vacant ashtray of a neighborhood, how I have come to love thee. Not for what you are but what you're not. "Come on, cruel world. Show me what you got!"


Bob Dylan - “I’ll Keep It With Mine”
This song has always tripped me out. But it’s been going on quite often in my mind lately. It’s such a close thing. I can’t tell exactly how this song goes, but it makes a lot of sense to me in some way. In the quest of doing things in life, so much comes into question involving how one perceives themselves and their weird struggles and finding some sort of personal validity. Always in hindsight I recall how stupid I am. But I talk a lot of shit. How anybody gets any perspective -- or if, for that matter -- is a total mystery mostly because, yes, decide something. Become open to something. Shut something off. Do something. Just don’t bitch about it, because I, like you should be, am very busy.


The Young Charlatans – “Shivers”
I've always been a fan of Roland S. Howard. He has occupied this strange place in my mind. Aside from his work in The Birthday Party, he was also in a bunch of other amazing bands, including Crime and the City Solution and These Immortal Souls, along with a guy who has occupied a similar place in my life, Epic Soundtracks. In fact, it was because of Epic that I ever heard of Roland S Howard. When I ventured down the path of his history I came across Howard. Something that I can’t quite pinpoint resonates with me in both of these guys. They had such unique musical voices and such heavy hearts and seemed to somehow be overlooked and recognized throughout history as contributors to other things as opposed to their own work. Which is totally fine, I think it’s best to be a part of something and not the star. I thought that “Shivers” was interesting because it was really a strong thing and made a strong impact on people. Even though there was never a proper recording of him singing it. The studio version of it had Nick Cave singing it in the band that would eventually become the Birthday Party. This one here (below) is a demo of the original band he was in that did it, and is the best version, I think, because it’s his version. I considered the song to have evolved into a sort of folk song.. Just a tune that came from somewhere that has no definitive version. But from me, it’s a nod to a guy that made a big impact on me. And that I can relate to. He may hate the fact that it's this song being covered. Who knows. I think it made sense in this collection coming soon (Tiny Rebels). And I think people should sing songs they love. And continue to breathe life into them. And returning to the first paragraph in this thing, I chose Howard's most famous song. Even though it’s a bit obscure, I don’t claim it. It’s a famous song in my eyes, and in eyes of Howard fans. Let's enjoy how much we love this song.