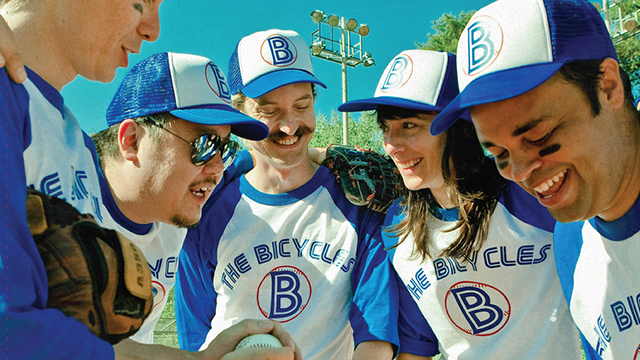 When Toronto's Bicycles went on hiatus in 2009, it was a sad day for lovers of brainy, silly, funny, sweet and rambunctious indie pop. In the years previous, the group had put out two records (The Good the Bad and the Cuddly and Oh No, It's Love) full of songs that had huge pop hooks, tons of goofy energy and big soft hearts. When the group decided enough time had passed and they could get back together and make music again, they did it in fine style with the album they just released last week. Stop Thinking So Much is vintage Bicycles with plenty of bright, happy pop, plus some well-played maturity creeping in at times. We were so very happy that they were back that we simply had to get a list from them. Andrew Scott (along with Dana Snell and Matt Beckett) complied, so away we go!

First, here's a video for one of the album's sweetest tunes, "Nap Trap":


Instead of spreading the love around to movies and food we figured we'd go thematic with our list... and tie it in to our release of our new record which is filling our days right now! (Also, it's fun to pretend to write like real music journalists! Who says musicians all want to be comedians -- rock writing is where it's really at, right?) As we're perpetually wary of our aging uncoolness, we've compiled a list of our five favorite "later-career, not-cool-with-the-kids-anymore oddity albums that rule hard"! Are these the best records of these folks' respective careers? Who cares! Leave the hits for the teeny-boppers, this stuff's for the headz! Our new record is called Stop Thinking So Much for many reasons -- as advice to others and to ourselves, and as a reflection of how we approached making the record itself (even if the cover artwork may make it seem otherwise) -- but in this case it's about not listening for hype and just letting the endearing, if misguided, qualities of some odd records by fully functioning, but enormously capable, burnouts shine through! Is it high art? Heck no! It's just music, and great stuff at that!

So, in no particular order:
Beach Boys - Love You
The number of times these fellows (our unhip heroes) tried to connect with "The Kids" after the massive artful successes of the 60's is certainly not few or far between, but their undaunted perseverance is staggeringly joyous. To finally end up at this record, which winds up being so outside and unhip that it's actually the HIPPEST of all… how punk is THAT!? That much of their 70's output is now considered soft-pop masterfulness and this one is still a little hard to break in on just makes it more rad. Seriously, asking Brian Wilson to write a record after being sidelined for the better part of the decade (or at least putting the Beach Boys name on what was supposed to be a solo record) was surely a gamble, but what did they have to lose? Like the psychedelic later paintings of Cat master Louis Wain revealing within their brilliance and simplicity an unnerving skew to the perceptions and mental state of the artist, Love You’s lyrical content is far more interesting than yet another cross-generational-connect attempt. Want to glad-hand about your buddy Johnny Carson? List a rundown of the planets and constellations? Mix romantic metaphors with childcare? Do it. You're Brian F'n Wilson, for cryin' out loud. Add in the increasingly gruff tenderness of the voice of brother Dennis and some of the finest synth tones of the day, and it's pure Non-Gold-GOLD from top to bottom. Totally the record we go to every time in the van on late night road hauls home to give us a good laugh and cry and sing at the same time to keep us awake!


T-Rex - Futuristic Dragon
Marc Bolan has to be the biggest Marc Bolan fan ever, and we (as Marc Bolan fans all) are all the better for it. We practiced the other day for our LP release party in a rehearsal room next to a band who had cheering crowds pumped through the P.A. at the end of each song they rehearsed and were immediately reminded of the genius that is Futuristic Dragon. Who cares if no one liked this record compared to his mega-hits. Marc Bolan obviously liked it. A LOT. So much so that he made the alternate version (just something he does, y'know, for the fans) the even more pompously titled "Dazzling Rainment". Go, Marc, go! That tunes like "Ride My Wheels" actually expand on his well tread format hit-machining (which is still there in cuts like "Calling All Destroyers", "Casual Agent", and "Sensation Boulevard") is a big plus. This LP has been bought so many times on tour and brought home to give to friends as a "Hey you like T-Rex? Well, listen to THIS!" gift for buds. And we do mean, YES!


Bobby Charles - Bobby Charles
Like some great lost record by the Band with a bit of the Beach Boys' Love You lyrical naïveté tossed in for good measure, this is another beloved ear-opening classic. Unlike somebody who'd spent a decade thinking higher-ly and higher-ly of themselves -- we're looking at you, Marc -- Bobby seemed to spend the time between his mega-hit "See You Later Alligator" and this just, well, getting high and, well, hangin' out. In fact, the lyrics on here pretty much state that straight up. There's so much honesty coming out of the man just riffing on his life and attitude and opinions (self-opinions?) on topics from drinking, to praying, to having or not having a job, to women (of course) to him just being himself so "Whatevs, man". The fact that it's all so dopily lounging on top of backing tracks deeply grooved by folks like the mighty Levon and Dr. John makes it seem like Bobby'd be a great guy to hang with... one dude who seriously would have known how to "Stop Thinking So Much".


Love - Four Sail
Arthur Lee might fall somewhere between all of these eccentric folks on this list so far -- surely not as fried as Brian, not quite as full up on himself as Marc, but also not as lackadaisical as Bobby. The guy surely had balls. To scrap the entire band and format that had championed him as an artful renegade a few records prior and put together a whole new band and rig up a situation that screams "I just wanna jam, man!" takes brass ones. Self assured chops-wise, but more down to earth lyrically, he may have stripped away the sweeping scope of artistry in this process but put together a combo that would be easy to imaging hitting a stage and just "going". It plays like he's having FUN. Which is fun, right? The tunes themselves are not slouchy either, even if they're boiled down to talking about the simpler things in life rather than heady journeys, and the grooves swing so smoothly from blistering breaks to speedy softness, to loping dopiness. If forever is changing, this is a fev stop along the way.


Chubby Checker - Chequered
Everyone from B.B. King to Little Richard (whose self love is also of Bolan-ian scope) were doing it at the time: blues, soul, and R&B cats trying to cash in on the explosion of funky, riffy rock & roll of the day. Did it ever really regenerate any careers? No, don't think so, but some fun records came out of it, if only really recognizable in hindsight. This is our favourite example because, rather than just re-jig old tunes, Chubby comes out of hiding here with some great, heartfelt and telling originals -- "If the Sun Stopped Shining" is simple but endearing, and "Stoned in the Bathroom" may sound goofy but is pure realness. Chubby's voice falters in a few places but is still great and illustrates that even a periodically wobbly Checker is better than 100 perfect wannabes. Imagine Chubby and Bobby Charles crashing on each other’s couches. Or both showing up in the same night to crash on yours…