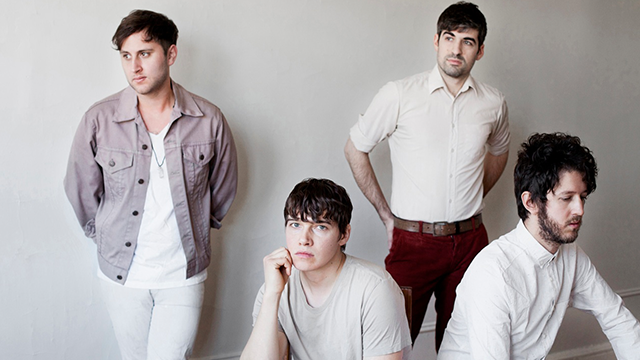 The Long Island chillwave group Small Black made a big splash a couple years back with the bedroom-gaze hit single "Despicable Dogs," that came from their self-titled 2009 EP. An album, New Chain, which was similarly crafted and similar in sound, followed in late 2010. This week the band releases their second album, Limits of Desire, and they change things up a bit. Instead of a one guy in a bedroom project, it's become a real band effort in a real studio. The sound is rich and clear, giving the songs room to breathe and making them totally college radio-ready. We asked the band's Josh Kolenik for a list and he sent along some stuff he was heavily into during the recording of the album.

First, here's a song from the record...

Raymond Chandler
I’d never been much of a detective guy, but last year I read through pretty much Chandler’s entire catalog and now often consider taking up sleuthing myself. Philip Marlowe speaks with the voice of the quintessential American anti-hero, and he’s got the quips to back it up, like the way he describes the detective job in this bit, “I’m a romantic. I hear voices crying in the night and I go see what’s the matter.” The track "Only A Shadow" on our record is a direct homage to ol’ Ray’s style. You should pick up The Big Sleep and just let your eyes and brain rip through the whole lot of these books.
Sidenote: Chandler also really didn’t give a shit. Here’s a letter he wrote to Alfred Hitchcock, telling him what he really thought of Strangers On A Train : https://www.lettersofnote.com/2012/01/flabby-mass-of-cliches.html

Shawn Kemp Dunk Highlights
If I need to consider wasting talent, I always go back to some of the NBA burnouts of the 1990s. Kemp, Vin Baker, Richard Dumas, Oliver Miller And I just watch 'em dunk and think about what could’ve been. Nobody was ever sad after they watched this:


The Blue Nile
The producer Kevin McMahon told me years ago that an older project I was working on sounded sort of like The Blue Nile, but I’d never heard of them. Last year I read an interview with Vashti Bunyan where she was raving about Hats, and finally got around to listening to it and definitely found some kindred spirits. Here’s one of my favorite tracks:


William Watson
I love this new NY based designer. His clothes are so strange and geometric, forming unconventional but highly charming silhouettes.

Walker Evans
Never tire of his photos of the south. I’m always revisiting Let Us Now Praise Famous Men for inspiration visually and through the wonderful writing of James Agee. His self portraits feel quite intimate, too.