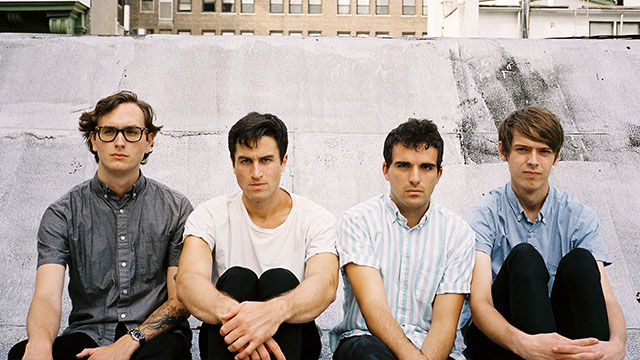 You hear the name Ski Lodge and you think of snow and winter and sweaters. Funny that the band of that name sounds nothing much like winter at all. Instead their new album Big Heart sounds like running across summer lawns, drinking cold beverages, skinny dipping, and acting young and desperately romantic. Maybe even while wearing shorts (see below). Their sound is pure jangle pop sweetness with a dash of mope, but not enough to freeze your heart. Think baby Smiths and you are in the neighborhood. We got the guy who writes and sings the songs to give us a quick rundown of some of his recent faves, but first check out a video:


Fresh parmesan cheese
Parmesan cheese was one of my favorite things when I was teenager. I used to love getting home late at night after a high school party and microwaving some capellini (angel hair) and then loading it with butter and parmesan cheese. Recently, parmesan has come back in to my life full force. Now that I’m a bit older I really appreciate the fresh stuff. Recently I’ve been just getting little containers of fresh shredded or grated and going in to the fridge and just taking little handfuls of it throughout the day. Is that weird? it probably is, but it’s too good to be ashamed of.

Shorts
I went for a few years without really ever wearing shorts outside of exercise, sleeping, or swimming. A couple of these years were spent in Florida, which made it even more of a task to wear pants. I felt like I NEEDED to wear pants when I was out around other people. I just didn't really think they fit me well. Anyways, I’ve really been working on toning my legs and getting them to look really good. So I started wearing shorts again a lot in the last few months. Specifically, a few different shorts from American Apparel. I’m really into them. I've got three different colors that I rotate through. Probably gonna get a couple more soon.

Coffee
First of all, I’m not just into coffee; I’m completely addicted to it. I feel like being "addicted" to something is way cooler than just being "into" something. Right? I get the whole headache thing if I haven't had any within an hour or two of waking up. My physical dependence aside, I really enjoy the taste of a good bean. I like Stumptown, Toby's Estate, Blue Bottle, and I frequent Starbucks because of its convenience. Coffee actually really motivates me to work on music and to get things accomplished. I usually spend my weekends getting a coffee and then heading straight to work on music. A lot of the time when I’m feeling a bit down or unmotivated, if I can just get a nice cup of that brew in me, life immediately looks brighter and I am way more motivated. This is healthy and normal I think, right? I can't overdo it though, otherwise I feel like I’ve been doing cocaine all night.

Analog synths
I’ve been specifically into a couple different types of synths. One being the Sequential Circuits Prelude. I used this one a lot on my LP that’s coming out. I planned on using it, and once Lewis (Pesacov) played it for me I was so hooked. We used it to fill out a lot of the sections in the songs. The string sound on this synth has such a beautiful and eerie tone to it. I think it added a whole other dimension to my songs. The other one that I’m into is the ARP Quartet, also for its string sounds. I like to think they make everything sound more beautiful.

Rhye
Really been in to Rhye's new album, Women. Seems pretty different from a lot of other music coming out right now. Their stuff reminds me a bit of Sade. The song "Smooth Operator" was probably one of my favorite songs when I was 8 years old (or somewhere around that age). I remember just laying in the way back of my parent’s car being on summer road trips and staring at the ceiling listening to that track. So yea, I really love the Rhye record, and maybe its connection to Sade for me has something to do with it.