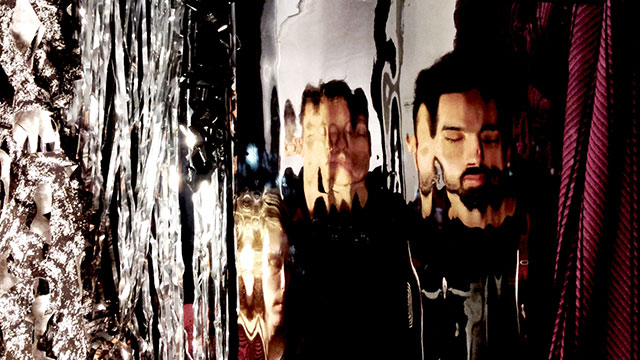 Their newly released EP, Better, is the first recording done as a full-fledged band, with Dean Tzenos deciding to make Odonis Odonis more of a collaboration. Thanks to this choice, the EP is a more varied experience than the band's debut, Hollandaze. There's still plenty of noise and energy, with a bunch of surfy lo-fi noise still going on, but also some new influences creeping in. Some Cramps, some Violent Femmes, a little Make-Up. It's an impressive follow up to a really promising album. We liked it so much that it seemed like a forgone conclusion to ask OO for a list this week. Dean Tzenos replied with an inspired trip through his history as a gamer.

First, here's a song from the EP:


Maniac Mansion (NES)
I remember being a kid and renting this game and becoming obsessed. I didn't really fully understand what was happening, but it was just sooo damn cool to me. The characters, the mansion, and the badass MIDI soundtrack made this one of my all time favorite games. I had to beg my sister to spend 60 bucks to buy this for me because it was about to be discontinued. 60 bucks for an NES game!!! Luckily I hung on to it, box and all.


We Love Katamari (PS2)
I remember trying this for the first time, and it completely changed my outlook on gaming. I was already getting sick of the first person shooter genre when this came out and it seem to defy all the trends. In We Love Katamari, the player controls a highly–adhesive ball called the katamari. The object is to make the katamari as large as possible by running over and collecting objects of increasing size. The more objects players collect, the larger the katamari becomes. Simple, right? Well, the unique way you use the controls, the incredible Japanese indie soundtrack that I can still sing every word of without knowing WTF I’m singing about, and the amazingly simplistic graphic design makes this one of the best games ever.


Journey (PS3)
This is the latest game I've played that has blown me away. I really didn't know what to expect, but it exceeded my expectations. People have been saying this isn't even a game, it's art and I couldn't agree more. I can't even explain the gameplay; you literally have to experience the journey yourself.


Galaga (Arcade)
I don't know why, but it's one of the few games of this era that I can play and still get completely hooked. It's so simple and I've never hooked games based on score, but shit, mang. I still itch to play this game just so I can knock out the high score on a machine. Yeah, the graphics and the soundtrack are ultra dated, but the fun factor is still top tier.


Contra (NES)
"Up up down down left right left right B A select start." Any gaming nerd knows what this means, and this is the game that started it all. Growing up with 80's action movies from Arnold to Van Damme, Contra was the best game to live out your sweaty muscle man action star fantasy in game form. Some of the best boss fights and Alien movie references kept me coming back for more. I can still plow through this game like it was 1987.


Leisure Suit Larry in the Land of the Lounge Lizards (PC)
Growing up without the internet left a lot of kids without a realistic shot at witnessing some boob action. All you could do was hope some teenager would toss out a dirty mag or you could stay up late and try to watch scrambled porn -- until this game. Finally, we could maybe see some pixelated titty and live our miserable perverted dreams, all while playing a total sleazebag. I remember sleeping with a hooker in the game without wearing a condom, running out the fire escape while being chased by a pimp, and dying of AIDS in a dank alley moments later. Classic.


StarCraft (PC)
Probably the nerdiest game on the list, but an undeniably good game. I really didn't think it would hold up, but a few years ago I pulled this out from the dust, tried it and my life was ruined yet again. A real time sci-fi strategy game… it's like opening a bag of Doritos but with extra nerd.


Silent Hill (PS1)
The never-ending fog, creepy sounds buzzing from your radio and the constant threat of hell on earth kept me totally on edge. The sluggishly crappy controls somehow added to the game. You know those dreams where someone is chasing you and you want to run but you just can't move? It’s like that, but shittier. Turning the lights off and wearing headphones is what takes this venture over the edge. The sound design was so well thought out that this alone made it a horrifying gaming experience. Maybe because it's Japanese I don't always get what’s happening in the game, but whatever’s going on physiologically freaks me out beyond the images on screen.


BioShock (PS3)
As far as first person shooters are concerned, this game takes the cake. I mean, Halo is amazing, and I'm sure COD and all that war propaganda bullshit is rad too, but this one is just better. They created a new, original universe to explore that's based on 1920's art deco architecture, set in an underwater universe filled with drugged-up lunatics that were hacked up from plastic surgery… giant monsters called Big Daddy's who look like beasts with old school diving gear (and protect little girls with massive needles). If you managed to kill one of these things you had to choose between good (saving the girl) or evil (killing the girl) – a novel concept. Here we are in 2013 awaiting BioShock Infinite (ed. note: BioShock Infinite was released after this Poplist was compiled) and I can already say it'll probably be one of the best games of the year – and I haven't even played it yet.