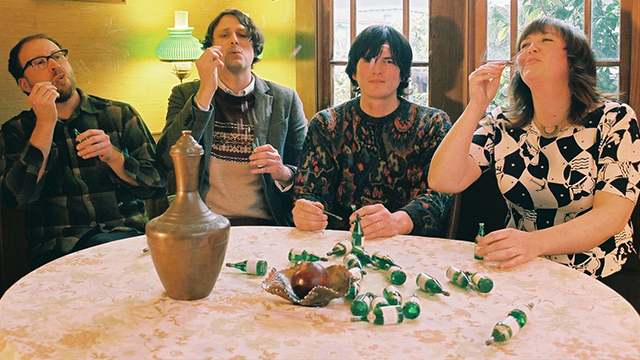 Like a lot of really good bands these days, The Mantles hail from San Francisco. They release their second album, and first for Slumberland this week. It’s called Long Enough to Leave and it’s really good. Lots of psych influences, lots of Flying Nun too, but they also have a knack for writing songs that sound good the first time you hear them, but really get under your skin (in a really good way) with repeated listens. Most bands that do the Poplist pick one member to do all the work, but the Mantles show off their good-natured, teamwork-heavy approach to being in a band by each picking something that inspires them. Way to win the Poplist, guys!

First, let’s check out a track from the record:


Michael (vox/ guitar)
Thorne Smith, author
Smith was a mind possessed with all the tools to fashion great humorist-fantasy novels. During 1920-1934 he lived in New York and based most of his stories there or nearby. The Volstead Act (prohibition) had just been put into effect, so what better time to write about ghost, witches, statues that come to life, and vampy-shrewish women, all enjoying a bit of "loudmouth soup"?

Virginia (drums)
Kevin Ayers – “Caribbean Moon”
Ayers is musical nobility in my book. I put on this video if I'm ever in a bad mood... that sailor outfit, the state-of-the-art special effects, the banjo, the island jams, and most amazing backup dancers in music video history -- it honestly doesn't get any better. It was a sad day when he passed away recently, feel blessed that I was able to see him perform in San Francisco back in 2000.


Matt (bass)
Psychology book cover designs from the past
Recently getting back into studying psychology, I started digging through my psychologist mom's library looking for books I might want to read. Though I found a few worth perusing, I was much more excited to find a gold mine of amazing book cover designs. I got pretty obsessed and kept digging around bookstores and the Internet, collecting a bunch of them and posting covers on peak-experience.tumblr.com.

Justin (lead guitar)
Colter Jacobsen, artist
Jacobsen is one hell of an artist, musician and long time friend. I actually met Michael from the Mantles through Colter back when we were all tadpoles swimming around the southern Californian pond. One of his most notable series of works involved rendering an exact replica of a photograph, and then recreating that image from memory at a later time. It is interesting to look at the two images together and see how the tricks of memory alter our perceptions through time. The mind is a strange machine, indeed.
{image:2}

Carly (keyboards)
Dukes of Stratosphear – “25 O'Clock”
I love this record! The songs melt my cares away like pastel sorbet on a hot summer day. Also, a great album to play when you need to roll around on your head.