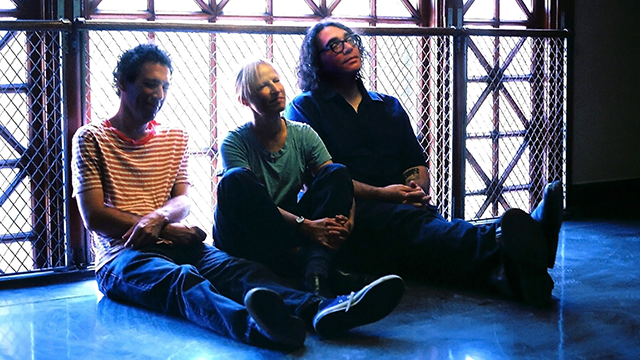 Ask the average indie pop fan who James McNew is and they'd tell you he's the bass playing third of Yo La Tengo and has been for a long time. Just that fact is enough to make him worthy of induction in the Indie Rock Hall of Fame, but in the mid '90s, McNew also made some pretty damn good lo-fi bedroom pop records using the name Dump. His fragile, affecting vocals, knack for a bright melody, and mastery of the crappy 4-track recorder are evident on the albums Morr Music just reissued in the past month. Both 1993's Superpowerless and 1995's I Can Hear Music are tricked out with remastered sound, bonus tracks and new art, and both sound as good now as they did all those years ago. We're lucky enough to have McNew with us in the Poplist this week, with a rundown of some of his favorite 12" singles from his formative years.

First, one of the highlights of I Can Hear Music:


Tilt (aka Trouble Funk) - "Arkade Funk" (D.E.T.T., 1983)
Slamming, heavy electro DC go-go, with video game sounds and delirious modulated voices. My own early-'80s video arcade experiences, a mere two hours away, were nothing like this; I was more preoccupied with why no girls were impressed by my high scores on Missile Command.


Convertion - "Let's Do It" (SAM, 1980)
Seemingly from that one day when disco, electro, boogie, go-go, and hip-hop were all kind of the same thing and didn't have names yet. Unpredictable, sophisticatedly weird production by (vocalist/keyboardist) Leroy Burgess and Greg Carmichael.


Camu Tao - "Hold The Floor" (Definitive Jux, 2001)
When Def Jux ruled the world. Camu's hot cold sweat rap is the perfect match for Prizm's fuzzy, neck-breaking track. The glitch in the second verse is always surprising and never fails to make me smile, even as I am shouting the lyrics at the top of my lungs.


Outkast - "Land of 1,000,000 Drums" (Lava/ Atlantic, 2002)
From the "Scooby-Doo" motion picture soundtrack. Just another thrown-off, irresistible Outkast track with a giant hook, a mile-a-minute "Lust For Life"-ish beat, and a crushing middle verse by Killer Mike. What's more, the song is ABOUT Scooby-Doo. Fuck off, all other movie composers.


Boredoms - "Ant 10" (Warners Japan, 2009)
Surging, swarming technicolor ecstasy. Somehow sounds like music from the recent past, right this very second, and the distant future (with a majestic touch of feudalist Japan), all at once. Warm, beautiful, inviting music that sounds like nothing else but feels like a loving friend. Like a liquid light show come to life. Like a vivid dream that you are living in the world beyond.


Count Floyd - 12" EP (RCA 1982)
The beloved host of SCTV's "Monster Chiller Horror Theater" heats it up with four party gems. "Reggae Christmas in Transylvania" couldn't be anything other than exactly that. After that, better step back while the Count breaks it down to the females on "Treat You Like A Lady." Owwooooooo!!!