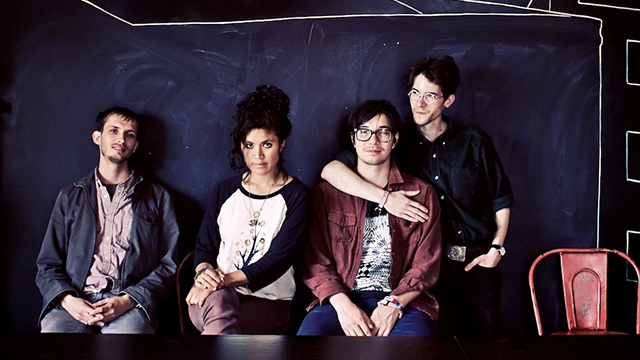 Hooded Fang release their third album, Gravez, this week on the Full Time Hobby label. Their first record was fun indie pop you could dance to, their second was peppy garage rock, but this is something entirely different. Darker, noisier, and slightly out of control, the band take a leap out of the happy and fun realm into something a lot more exciting. The other albums were good enough, but this album sounds like it was ripped out of their hearts and spattered on the tape with tears and blood. They don’t skimp on songs, either – everything is very hooky and the production is really interesting, too. Basically, everyone reading this sentence should check out the video we’re featuring, and then read on about the band’s favorite photos.


{image:2}
This photo by Anurag Kumar is like an abstract painting. I love the dash of blue and the varied textures. Chaos and order together forever. - Lane Halley

{image:3}
This is a pal of mine, Toronto artist Kristina Guison. She spent a lot of time in the Northern Philippines (Buscalan, Kalinga), where she became friends with 90-year old tattoo artist Apo Whang-Ud. Apo Whang-Ud gave Kristina a whole lot of cool traditional tattoos ("batok"), using an old back hand two bamboo stick method. She also taught Kristina her ways, and now Kristina goes around giving cool tats herself. - April Aliermo

{image:4}
This is some random picture I found on the internet. It's funny. - Daniel Lee

{image:5}
Sarah Hoey's photo not only looks cool, but also depicts what all artists are trying to do, which is mind-barfing their art into reality. - LH

{image:7}
This is by Alakazam from London. I look at his art all time. He used to do artwork for Architecture in Helsinki, among other people. He is amazing. - DL

{image:8}
This photo is called "Kent Monkman: Sexuality of Miss Chief". He is a Cree multidisciplinary artist who examines and pokes fun at the way First Nations Peoples are portrayed in Western art. He also creates new stories that give voice to First Nations in an empowering way. Monkman incorporates his queer identity in his work. HE IS ALL AROUND RAD AND EVERYONE SHOULD CHECK OUT HIS WORK! - AA

{image:9}
This is Daniel on some beach a few years ago. It's one of my favourite pictures of him that I've ever taken. I think it was our old bandmates Nick + Lorna's birthdays. Both Canada babies. - AA

{image:10}
I first heard about Disfarmer because of an Americana album Bill Frisell made. This couple obviously has a long history and I have to ask myself a myriad of questions: Do they still love each other in this photo? What hardships had they faced? When did (Hooded Fang drummer) D. Alex get so old? Is he a future time traveler? One has to wonder. - LH

{image:11}
These are a couple of my homies and their awesome kid. They've taken badass traditional Filipino clothes and mashed it up with their own badassness. Jen does a lot of cool art and JR produces music. Sometimes he plays that big Filipino Kulintang drum and she dances like a queen. - AA