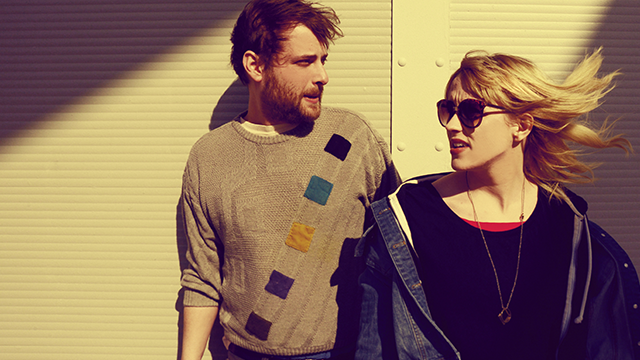 When Jenn Wasner of Wye Oak heard the R&B tracks her friend Jon Ehrens of Art Department was working on, she was rightly impressed. He needed a singer, she volunteered and Dungeonesse was born. He emailed her tracks when she was out on tour, she sent them back fully vocalized, and the end result can be heard on their self-titled LP, out this week on Secretly Canadian. I'm not giving away too much when I tell y'all that the album is a total jam. Wasner completely nails every pop and R&B style Ehrens throws at her, from heartbreakingly downbeat ballads to uptempo, giddy club tracks. It's a very, very impressive debut that almost makes you wish they'd quit their respective day jobs and just make Dungeonesse records all the time. We asked Jon for a list of cool stuff, but first here's this amazing song from the album:


For Record Store Day, datpiff.com allowed non-premium accounts 420 downloads. I downloaded a bunch of mix tapes (nowhere near 420), and my favorite five in no particular order are:

Lloyd – The Playboy Diaries, Vol. 1
Lloyd is fantastic. Whereas most pop-related acts often half-ass their deep cuts and focus mostly on perfecting the hits, Lloyd's songs are usually thorough and sung well. The production on this tape is airtight, too. I really like how digital music is really coming into its own – I totally get the argument for analog sounds and gear, but the apex of that sound was achieved in the 1970s and is, for a variety of reasons, unattainable now. But digital music has found its voice and it sounds nothing like, nor does it intend to, the warm 1970s records. Instead of the full, warm tones that were sought after then, it’s a clean, precise sound that seeks to separate frequency ranges and focuses mainly on the upper and lower registers, letting crisp voices sit in between them. I need to work on this a lot.

DJ AngelBaby – Get Pumped, Vol. 1
I didn't know about AngelBaby until she was on the cover of a local paper a couple weeks ago. When I got this tape I was pretty surprised, because (and maybe I'm wrong, but…) a lot of Baltimore Club music in recent years had moved toward being more production heavy – but this tape is super abrasive and raw as shit. It sounds like real classic club stuff, but still incorporates samples from modern hits, which I like. Lots of good DJs on this tape and in this city in general.

Cassie – RockaByeBaby
I honestly know very little about Cassie, but a friend of mine hit me up and told me it was great and he was RIGHT. It's sexy as fuck, and kinda psychedelic. This tape, along with a lot of modern radio R&B, has gotten really, really trippy. There are tons of bizarre arrangements and pillowy, filtered down tones. I don't know what to attribute that to, whether it’s just more acceptance by the radio listening public for slower and stranger sounds, the combination of lean and molly, or just whatever forces control what music becomes popular are working some strange magic. She's got a pretty cool voice, too; icy and contained.

DJ Chizzle – Florida Jookin, Vol. 7
Florida Jook music. I had heard that Grind Mode song "I'm So High (She's So Fly)" a few years ago, and was super into it. My buddy told me it was "juke music" and at the end of the song they say "juke" a lot. When I tried to find more I kept getting Chicago Juke (aka footwork) music and was like, "What the hell is this shit? This doesn't sound like Grind Mode dammit!" Then I figured out that Chicago Juke was AMAZING and forgot all about Grind Mode. Recently, I internet-stumbled upon the Florida Jook style by spelling "juke" differently, and it was all this shit that sounded like that Grind Mode track. Blissed-out, borderline-cheesy party music, super simple melodically, and irresistible.