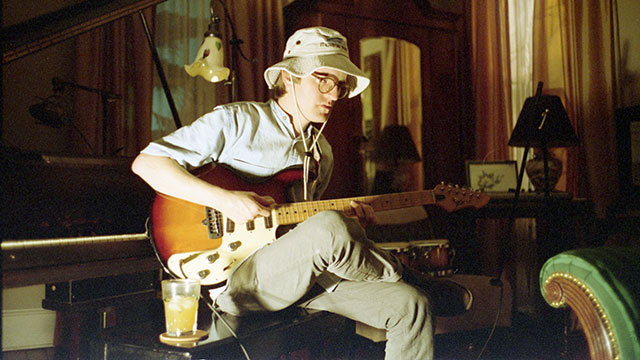 Dent May started off as a ukulele-wielding, off-kilter songsmith with a knack for a catchy hook. Then in a flash of inspiration, he ditched the uke for synths and disco jams. Now on this third album, Warm Blanket, May has taken on the identity of a heartsick fella on a piano bench, singing his sweet guts out as the strings swell and the horns serenade. Think Paul Williams, Harry Nilsson and Van Dyke Parks and you’re on the right track. Just like those guys, May can twist words into poetry and his melodies are bound to stick in your head forever. We here at the Poplist are feeling this album for reals and we asked May to tell us a little about his recent fascinations. First, how about a song from the album?


Phantom Of The Paradise
I did a show in London where the band plays a set then screens a movie of their choice. I picked this one and it went over well. It's a lot of fun. Paul Williams is a hero, and I recently read that Daft Punk may have been inspired by this movie to create their helmets. There's also great use of the iconic TONTO modular synth. One day I hope to make an insane rock opera of my own.


Jackson Southernaires - "Don't Look Down On A Man"
Malaco Records is a gospel, blues, and R&B label in Jackson, Mississippi that more people should know about. It's been around since 1962, and the scope of their output is overwhelming. Frank Williams of this group went on to create the outstanding, powerful, 100-plus member Mississippi Mass Choir. The message of this song is timeless and beautiful.


Euclidean Rhythms
This flash app for "generating African rhythms using the Euclidean algorithm" is next level for creating wild percussion patterns. It's also highly addictive, and little to no musical talent is needed to get going with the web app. Enjoy.

Kathleen Daniel - "Spiritual People"
I don't know much about Kathleen Daniel and her self-described "native, pop, funk music and down-home animation," but I do know that I've gotten lost in her YouTube channel on many late nights. It's all weird and wonderful, and in my opinion she's an absolute visionary.


Peavey
I can't vouch for their new products, but old school made-in-Mississippi Peavey guitars and amps from the early '80s and earlier are where it's at. Maybe I'm spoiled living down here, where at any time you can find this stuff for practically free on Craigslist, but I have to rep my state and say that any musician on a budget should be shredding on Peavey.