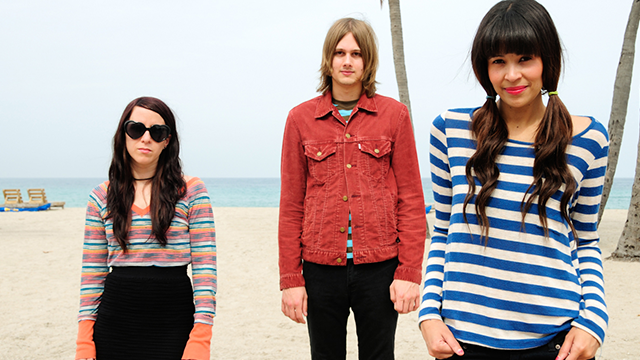 The Florida trio Beach Day release their first album, Trip Trap Attack, this week on Kanine Records. It’s a bouncy blast that totally lives up to their name. Sunny, beachy girl group and garage rock-inspired songs that sound like summer and have a nice raw kick. The group’s vocalist/guitarist Kimmy sent us a list of her top five fantasy TV shows -- thanks, Kimmy!!

Here's a track from the album:


Once Upon a Time
We're all completely obsessed with this show. At night when we get back to our hotel room, you'll find all three of us with headphones on watching episodes of this show. It's about all the characters you know and love brought to life, including Snow White, Rumplestiltskin, Little Red Riding Hood, Dr. Frankenstein, Mad Hatter. This show has it all! All the characters are stuck in a town called Storybrooke that was created when Snow White's evil stepmother puts a curse on the whole enchanted forest where all these characters live. And this kid Henry knows all about the curse that no one knows about! This show rules!


Merlin
This is my all-time favorite show! It's all about magic. And anything that has to do with magic is the best in my mind. It comes on BBC and it's set in Camelot. The star is Colin Morgan, who plays Merlin, and I think this role was made for him. He's the best Merlin ever. Basically, King Arthur gets into all sorts of trouble, and Merlin saves him over and over again and gets no credit for it because magic is outlawed in Camelot. So Arthur thinks he's a bumbling idiot when he's really the savior of Camelot and Arthur! This show has a lot of comedy, romance and adventure. And there's a talking dragon! What more could you ask for??


Supernatural
We all love Supernatural! It's a heartfelt one with tons of fantasy and adventure! It’s a story between two brothers who are born into a world of hunting, well, the supernatural. Ghosts, demons, zombies, bogeymen, you name it. Dean and Sam Winchester eventually come to learn that in their sibling and professional partnership they're also key players to saving opposite sides between heaven and hell, and they must battle themselves and each other to save the world from the apocalypse! We're all waiting for Dean's slick black '67 Chevy Impala to be up for grabs -- we don't mind being cramped on tour to roll up in “style”.


Smallville
When I first saw Smallville I was like, "Nope, not watching that one." But when I took some time and started from the beginning, I fell in love with this show. Especially Tom Welling. He's a perfect Superman. He's charming, innocent, sweet and tough as hell. Basically a dreamboat. Then there's Lex Luthor, his nemesis. It takes a few seasons for his serious bad side to come out. It's a slow burn, but once he goes full dark side, it's pretty awesome! You want to kill him and love him at the same time. So great!


Flash Gordon
This is not the Flash Gordon you know; this is not the movie or the 1954 TV show. This is a Sci-Fi channel original series that came on for one season starting in 2007. Flash is played by Canadian actor Eric Johnson. He's great in this role. This show is mostly comedy and completely ridiculous. But you'll love it if you love Sci-Fi, or SyFy as it's now called. It's the story of Flash trying to find his father on the planet Mongo, which is in a different dimension than Earth that's connected by rifts. In this version he encounters Aura, who's Ming's daughter, Baylin, and of course Rankle. I love this show. One season of perfection, if you ask me!