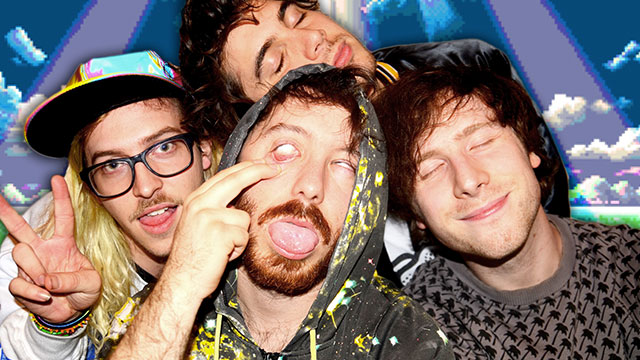 The four guys in Anamanaguchi decided to not fool around with record labels when it came time to record their second album. They went straight to the people, and the people came back with double what they were asking for. It's totally no surprise that the band has such rabid fans because there really aren't many, if any, bands out there like Anamanguchi. Their warped, hyperactive pop is equal parts video game soundtrack, day-glo workout tape, and ecstatic dance floor filler, I said in my review of the completed Endless Fantasy album that it sounds like the music for an Andrew W.K. video game and I still think that's true. It's also some of the silliest, most invigorating, most fun pop music around. We asked the band for a Poplist and in their excitable fashion, all four members kicked in.


Pete
Ventla
An independent musician from Japan - he's trying to release 100 free albums in a very short period of time. In about a year and a half he's already done 22, and most of them are incredible. His synth equipment list is over 100 long, everything sounds super hollow like it's been run through an old VHS tape. It sounds far away in time, almost an alternate universe that never happened. I think his album Anti-Vivant is my favorite album right now. I can listen it forever.

George & Jonathan
These guys are the ultimate suburban party friends. Their music sounds like if Parliament and TLC were arranged and sung by a Japanese computer AI - super expressive. Their logo is a wagging finger which is pretty much sass incarnate. They've also got three free albums online.

Sir Sampleton
This is an iPhone app that lets you sample any sound and turn it into a keyboard. I found out that if you roll your r's and play it back super slowly you sound exactly like a bear; play it back super fast and you sound like a bird of prey. CRAZY SHITTTTTT. But yeah, you can sample microwave beeps and turn them into a synth. It's one of the best creative tools I've ever used.

Manhattan Special Espresso Soda
I always used to be like 'wtf is this' at delis and stuff - but this has honestly fueled putting out our new album Endless Fantasy without a label. The sodas explode every time you open them no matter what, but the espresso works and helps me work.

Oculus Rift
The Oculus Rift is a fucking helmet that you put on your head and has two displays that simulate your eyesight - and it's camera angle is 100% reactive to where your head is. It's virtual reality that actually works, like for real. I got to try it at the Museum of the Moving Image this year and it's the first time I truly thought, "OK, this is the future." You don't even need to make games for it really, I would love to just walk around in an environment using it. It's quite peaceful really. Except for this demo, which is a guillotine simulator.

Ary
Bosozoku anything
Bosozoku is a Japanese subculture made up of rebellious teenagers associated with gang stuff. The Bosozoku aesthetic is probably my favorite thing right now. They illegally modify cars an motorcycles to look totally insane, all lit up with crazy bodykits, HUGE tail pipes that are super loud... And they just like lurk the streets late at night, driving super slow, often against traffic, just being super noisy and disrespectful. It rules!

Moves//RHLS
Moves is a clothing store in Brooklyn that mainly sells stuff by RHLS (ran by all the same peepz). They make super cute, colorful future clothes and they let us wear them.

Cameos.tumblr.com
This is my fave Tumblr right now. Every image is perfect...They're all rips from old games slightly edited to be the most beautiful things everrr. Best color schemes-- all pink n purple n turquoise n stuff.

Grapefruit Perrier
Not much to say here other than I really fuck with it.

New gen Furby
Everyone knows I love Furbyz, but honestly no one realizes how sick the new Furbyz are. There's an app that comes with the Furby that lets you design sandwiches n stuff. You can make, like, an ice cream bacon sandwich and then remotely feed it to your Furby. You can feed it coffee and energy drinks til it freaks out and totally changes personality from like sassy tween to psycho monster.

Luke
Picklebacks
In case anyone doesn't know, it's just a whiskey shot that you chase with a shot of pickle juice. I think picklebacks are my favorite way to do a shot. I enjoy these especially more when the pickle juice is nice and spicy! Post No Bills in Bushwick has really good ones.

Uhh Yeah Dude
Jonathan Larroquette and Seth Romatelli have been doing this podcast for seven years, and it's been amazing from the very beginning. This is my favorite thing to listen to on long train/car rides. Always funny, more informative than one would guess, and fantastic intro/outro tracks, all selected from Jonathan's extensive library. 2006 for life.

Makoto Shinkai
Makoto Shinkai is responsible for some of the most beautiful anime I've ever seen. 5 Centimeters Per Second and Children Who Chase Lost Voices from Deep Below are gorgeous and heartfelt movies, and visually are damn close to perfect. This guy really does it for me.

Baths/Geotic
My best friend, Will Wiesenfeld, makes some of my favorite music in the world. His new album is called Obsidian and it's truly a gift to the world. Album of the year shit. Touching, haunting, impeccably produced, resonating. He also makes loop-based ambient music as Geotic, which is gentle and rewarding -- and goddammit, Will just couldn't make bad music if he tried.

Kapsalon
I ate a ton of this when we were just in Amsterdam. It's gross as hell and I love it so much. It's fries, topped with melted gouda, shawarma, and salad on top. Basically as "drunk food" as it gets anywhere in the world. I'd really like to find a place in New York that will make kapsalon. Someone open that, please and thank you.

James
Nathan For You
This is by far the best comedy on television right now. It's a reality show on Comedy Central where Nathan Fielder goes around giving ridiculous advice to struggling small businesses around LA. He's completely straight laced and serious so no one ever questions his ideas. He gets a pizza place to guarantee a free pizza if it's not delivered in eight minutes. The catch? The free pizza is one inch.


Open Source Electronics
The Internet is a huge resource for sharing ideas, and having the freedom to do what you want with your hardware is a really special thing. Building it yourself allows you to get an understanding of how it works and realize you can do it for much cheaper, all while having it do exactly what you want it to. Adafruit Industries, an educational electronic webstore, is a big reason I'm doing any of the electronics and lighting work that I do for the band.

NHL/NY Rangers
It's hockey playoffs right now, and they could very well be knocked out by the time this is published (I know that I'll jinx it) (ed. note: As of the publishing date, the Rangers are hanging in there!). But hockey is such an awesome sport -- despite how barbaric it is, it requires so much finesse -- the moves these guys pull off are incredible and they're all gliding around on ice, not to mention fighting is completely legal and encouraged. If I had one regret in life it's that I didn't get into hockey early enough to try playing.

Taiko Drum Master
By far the best rhythm game out there, unfortunately, it barely exists outside of Japan. This game has so much going for it: amazing J-pop songs, completely insane Japanese visuals (dogs dressed in bibs, drums getting text messages, pork buns dancing across the screen), and simple controls that can get as hard as you want. Good stress relief, too. If you're ever in a Japanese arcade and you don't try it, you're seriously screwing up.


Cold Brew Coffee
I'm no snob, I swear, just dump a pound of coffee grinds into a gallon of water, let it sit overnight, and voila, you have a very large amount of some very potent coffee.