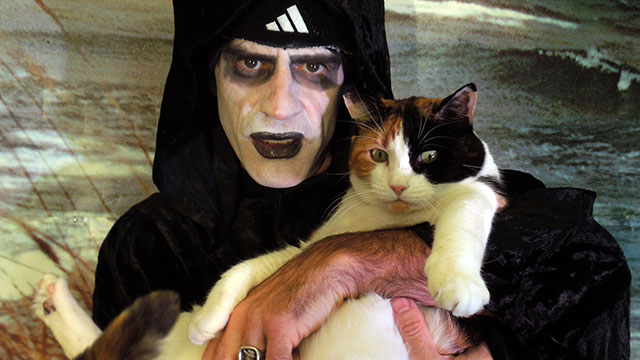 Aleister X is a mysterious, deeply weird artist/producer/performer whose music mixes up elements of rap, pop, dub, punk and whatever else he can find into something that's hilarious, catchy, and like nothing else you're likely to hear anytime soon. His debut album Half Speed Mastered is out next week on fellow weirdo Andrew WK's Steev Mike label and in Aleister's own words....“it’s meant to be a contemporary L.A. noir love affair. I love the Hollywood dark-side-of- Tinseltown vibe as well as the iconic images of bungalows, canyon houses, swimming pools and cars, weirdos, the “Boogie Nights” to "Bang Bus"-era porn industry, and Rad Culture - surfing, skateboarding, beach culture, punk, surf rock, stoner rock, west coast rap, rock and psychedelia; all the cool Southern California shit.” Perfect! We asked the man himself to send us a few things he's been getting into lately.

First, here's the video for the insanely hooky "LAX."


Baby Metal
This is the newest shit in Tokyo. Combining J-Pop and modern metal, Baby Metal are 3 early teen girls dancing and singing to a technical metal band. This is why Japanese pop culture still rules. Gangnam style can suck it.


Banged Up Abroad
This is one of my favorite shows. Every episode is the same story: So-and-so is tired of their dead-end job, looking for some fun, someone offers them a 5-star vacation in a tropical paradise, a load of cash, sounds too good to be true but they say “What the fuck,” then shit gets heavy and their strappin' gear all over their bodies, then they get busted at the airport, then they get banged-up for years in a super gnarly 3rd World prison.


Thirstin Howl The 3rd
Thirstin and the Polo Rican/Lo-Lifes crew could eat the Odd Future, A$AP, Joey Bada$$, and all their crews, for desayuno. Fuckin' LEGEND.


Spun
Spun is a great movie. A lot of people know that post-Smashing Pumpkins, Billy Corgan-led Zwan, contributed heavily to the soundtrack. But what almost nobody knows is the spine-tingling acoustic version of Iron Maiden’s “Number Of The Beast” that plays during the title credits, is by Matt Sweeney (Endless Boogie, Zwan, Super Wolf, Chavez, etc). That’s him singin' and playin' guitar. You can also hear him playing guitar on number one hits like, “Rolling In The Deep,” by Adele.


Doug Stanhope
2013 is Doug Stanhope’s year, and this is why. He makes me miss Bill Hicks less.