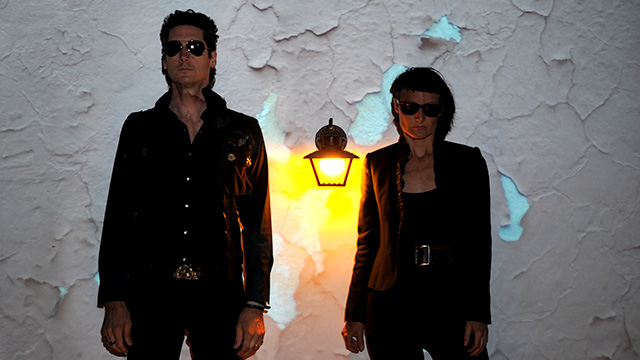 The Detroit spouses duo of Nicola Kuperus and Adam Lee Miller (AKA Adult.) have been creating artistically challenging electronic music together since the late 1990s. Working along the edges of the electronic music scene but making some of the most important records of the past decade and a half, their dark synthesizer sound is noisy and harsh, Kupernus' vocals are beyond cold, and the songs are both chilling and memorable. After a long stint recording for Thrill Jockey, the duo have jumped over to Ghostly International for their new album, The Way Things Fall. It's out next week, and we're super excited to hear it! Until then, we have a song from the album and a list from each member.

First, here's a song from The Way Things Fall:


Nicola's picks:
Fire in the Belly: The Life and Times of David Wojnarowicz by Cynthia Carr
This book was lent to me by a good friend. I generally dislike borrowing books because I am a slow reader, and borrowing makes me feel a certain pressure to get the book back right away. This particular book is 624 pages, so I was even more apprehensive to agree to borrowing it. Once I read the first few pages, I was completely obsessed. I finished it within a week. While I had heard of David Wojnarowicz, I was very unfamiliar with his work and his life story. Since I was only a kid in the mid/late 80s, I never really knew the details of the AIDS crisis. This book was a big shocker to me. So much history that I was totally unaware after all these years. This book touched on so many different emotions and topics. A very beautiful yet sad story. It also reminded me that there is power when we are united and organized, and you should never let anyone push you around when you know there is injustice occurring.

Mobile Homestead by Mike Kelley
I'm a huge fan of Mike Kelley's work. I find him to be one of the most compelling and inspiring artists of our time. Before committing suicide Mike Kelley left something very special to the city of Detroit: a replica of his childhood home from Westland, a suburb of Detroit. This important piece will live on the grounds of the MOCAD here in Detroit. I feel, as a longtime Detroiter, very honored that we get to care for and share this piece with all who visit Detroit.

Grimes' "Oblivion" video
I'm pretty impressed by Grimes, and this video may be one the best all time ever videos. The song is a 10/10, great music and lyrics, but the video puts it into another realm. To use public spaces so effortlessly, all while talking about ultra masculine topics, is very remarkable. I look forward to future Grimes releases and hope that she can hold strong against the pressures of the music industry, i.e., not letting the "boys club" dictate that she needs to become more produced.
https://www.youtube.com/watch?v=JtH68PJIQLE

9 to 5
I was flipping around Netflix and saw 9 to 5 in the comedy section. I hadn't seen this movie since I was a kid and thought I'd watch it for a minute, have a laugh, and turn it off. I couldn't turn it off. I watched it all. I know this may seem ridiculous to include in my top five. I could certainly list a prestigious art house film, but I felt compelled to list 9 to 5. Here's why: First off, what a fantastic cast -- Lily Tomlin, Jane Fonda, and Dolly Parton. This is an all-star line up of amazing ladies, and their character development is perfect. Second, while this is a comedy, it's pretty dark and subversively touches on a lot of feminist issues. I was surprised to see it was made in 1980. Third, the narrative is creative and clever. The styling is excellent. And the film itself has some pretty amazing shots. If you haven't seen this, please do.
https://www.youtube.com/watch?v=V2PAzj7_zNA

The Five Year Diary
I recently purchased one, and I have to say it's pretty great. This little gem allows you to jot down a few quick thoughts about your days activities. After time, it helps you get a perspective on what exactly it is that you do with your time or don't do with your time. Everyone should have one. It also makes an excellent gift. $12.47 on Amazon, get the one by Tamara Shopsin.

Adam's picks:
"New" piece of analog gear: Dave Smith Mopho x4 (2012)
We bought this synth in late 2012, thinking it would only be used for live shows. Our studio is 95% vintage analog synthesizers and drum machines, and I have always been skeptical about new gear, especially when it claims to be analog. The Mopho x4 arrived while we were in the middle of writing our new album, The Way Things Fall. Within the first day it made its way into the current song we were working on, and it continued to make its way onto all the remaining songs we wrote for the album. I can't say enough good things about this synthesizer; it can go from the simplest single oscillator monophonic purity to the most complex double oscillator polyphonic beast. If a young person came to me today and asked me what synth they should buy I would say they should start with this one. (*This might sound like a sponsor endorsement, but I promise I'm not getting a dime for this!)

Recent album: Douglas J. McCarthy, Kill Your Friends (Pylon Records, 2012)
For those of you who are unaware, Douglas J. McCarthy is the frontman of the seminal electronic band Nitzer Ebb that was founded in 1982. I have been a big fan of Nitzer Ebb since the mid ‘80s, but I'm not one of those people that gives Douglas extra bonus points for this before hearing his solo record (as a matter of fact, it might the opposite). The first listen was slightly confusing because he definitely pushed himself out of his comfort zones (what all great artists should do). I let it bounce around in my head for a few days. By the way, this is usually a good sign for me to be a little confused on a first listen. I remember having the same feelings when I first heard Public Image Limited's Second Edition, for instance. Anyway, Kill Your Friends continues to grow on me with each listen; there's something equally new and unfamiliar. I'm seduced and then I'm on guard. I would also like to point out that this record also sounds good anywhere: at a club; in the background of a dinner party; on headphones; or while cleaning the house!

Recent book on painting: Painting (Whitechapel: Documents of Contemporary Art) (Edited by Terry R. Myers, 2011)
I went to art school for painting. I'm very interested in the contemporary dialogue of painting, but it is difficult for me to find a book that is both thoughtful and relatable to me and to my thoughts and concerns regarding contemporary painting. I typically read interviews with artists, as I find other types of books on art by-artists-for-artists few and far between. This book, which is a collection of essays/excerpts, is one of the best I have found recently. Terry R. Myers is Associate Professor of Painting & Drawing at The School of the Art Institute of Chicago. We went to see Myers lecture recently; he was very listenable and yet very proficient. The book focuses on the so-called issue of "the Death of Painting" and its constant rebirth. The title of Terry R. Myers' introduction is, "What has already been said about painting is still not enough." In this essay, he quotes Delacroix, "…what moves men of genius, or rather, what inspires their work, is not new ideas, but with their obsession with the idea that what has already been said is not enough." I find this sentiment very reassuring in many of my motivations regarding painting and music. When we are constantly asked about the continued cycles of synthesizer music that has been around since the late ‘70s to now, I always think, "what has already been said about synthesizers is still not enough."

Recent film: Beyond the Black Rainbow (Directed by Panos Cosmatos, Soundtrack by Jeremy Schmidt, 2010)
As I already touched on with Douglas' record, I'm always a bit skeptical of things when I feel I immediately understand them. This film has that ambiguity I look for in something that is both familiar and odd. The amazing soundtrack obviously references '80s horror, but uniquely combines '60s psychedelia. There are plenty of film history references from 2001: A Space Odyssey to David Cronenberg and David Lynch, yet it feels to me like it could have only be made today with those references so clearly in the fabric of film history. I can't stand how so many films negate the importance of the soundtrack. I love how this film slows down at times to let the soundtrack dominate. They definitely got the balance right between sound and vision, or at least the way I like it.
https://www.youtube.com/watch?v=Q1ertVYn750

New(ish) record label: Felte
We wrote our new album in multiple types of isolation. For instance, Detroit has a type of "elective" isolation that is unlike anywhere else I have ever been, we wrote most of the record at the beginning of winter, and we had taken a needed break from current events in music to focus on our film and video work (and so I could spend concentrated time on my painting work). Needless to say, after about three years of new music ignorance, it was refreshing to hear so many amazing things going on during our return. One thing in particular is the fairly new label Felte Records out of New York. It has such a specific/considered aesthetic and yet each artist is totally individual. I can't stop listening to PVT, ERAAS and the new Standish/Carlyon. Check it out!