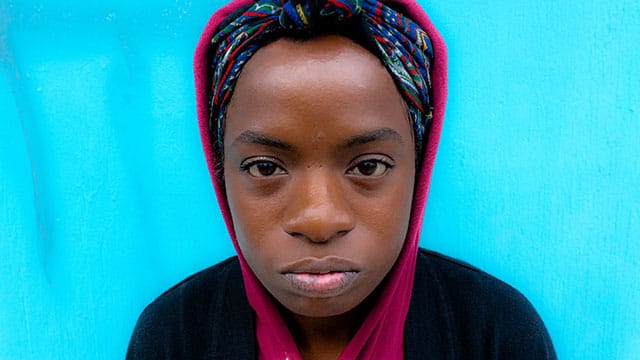 Sunny War has never been content with rote reenactments of the tropes of folk and blues music. Born Sydney Ward, the acoustic singer-songwriter (and sometimes punk bassist) has never shied away from blending her myriad tastes and lyrical concerns into her gentle sound.

On her latest, Shell of a Girl, Sunny War shows off both the seriousness and playfulness that set her apart from the pack. After all, this is an artist who wanted to make a classical guitar album of nothing but Slayer covers. Along with an exclusive stream of her new album, Shell of a Girl (out on August 23 and available for preorder), the vagabond musician spoke with AllMusic about bad drugs, fake punks, and rediscovering the versatility of acoustic music.

AllMusic: Did you have any particular objective when you set out to make this record?

Sunny War: This album wasn't exactly a mistake, but I was just trying to make a single, and until "Shell," we were saying, "This doesn't feel like a single." I had to write five songs before "Shell," and at that point I had six, so I thought I might as well try to add a couple more.

AllMusic: You had multiple releases last year, do you feel like you're having a prolific moment?

Sunny War: I now have seven new songs that I want to record, so I feel like I will have another album in six months. I think it's a lot to do with playing more shows and seeing more people play and kind of getting inspired by all the different bands that I've been seeing. I've been playing a lot of folk and American festivals, and even though I do like that kind of music, I've never really been at an all-day event where you're just hearing band after band, and I guess it got me thinking about it again.

And I've been meeting people that were not necessarily playing the most traditional kind of folk music. So I got inspired by hearing new ways, because it's easy for me to just assume I'm going to hear some bluegrass band, but then I'd hear stuff where I'd say, "OK, that has bluegrass elements, but that's not really traditional," and just hearing stuff where it doesn't sound like just some old-timey stereotype of a song, it still sounded very new. It's been a really long time since I was listening to blues or folk music, even though I do acoustic stuff. I think I've been falling in love with that kind of music again by hearing it live a lot.

AllMusic: Do you always prefer to listen to artists who put a twist on their genre?

Sunny War: I definitely don't listen to anything like what I play, I don't listen to a lot of acoustic stuff or even blues or folk or singer-songwriter stuff. I like some every once in a while, but for the most part I'll listen to punk or hip-hop, or a lot of Afrobeat lately. I just heard this band of sisters who play cello and violin, and they're called SistaStrings, and they're classically trained, and they played this Nina Simone mashup, where it was half this classical song, and half Nina Simone's "Feeling Good," and it was sick. They look like they're in their twenties, and it just brought me back to how interesting acoustic live music can be.

Sunny War: That was one of the attempts at trying to make a single, I thought maybe it should be something upbeat, and I had that guitar riff and wanted to use it for something. I think that was one of the first ones, but as far as the electric guitar at the end, that's my friend Milo. The idea was to follow the riff, where he does his little solo, but his riff sounds kind of like a Japanese scale.

AllMusic: I could see other artists taking a title like "Drugs Are Bad" and making a tongue-in-cheek song out of it, but yours has more to it than that.

Sunny War: The title is usually whatever the chorus is. At that time, my friend was having a bunch of breakdowns because she had stopped taking her medication, because her insurance wasn't going to cover it anymore and she couldn't afford it, so she was trying to live without it. But she was just losing her mind, crying and being really hysterical and stuff. And it reminded me of when I was kicking dope, just acting crazy.

So it made me think it's funny how if I do heroin, that's definitely bad, but if somebody's on these mood stabilizers, that's supposed to be good. Watching somebody go through that, I was like, "I've seen this before, but usually it's somebody doing drugs that are bad." And knowing that a lot of that stuff is just speed, chemically, and we look down on people who do speed. So the song is kind of funny, a little bit. When I first showed it to some of my friends, they'd just laugh when they heard the chorus. I guess it's kind of silly, but it also is a serious song.

AllMusic: You've expressed your respect for figures like Sister Rosetta Tharpe and Billie Holiday. Were you into them early on or did that come later?

Sunny War: I was really into that as a teenager. I went to a music high school, so it was all theater kids and jazz musicians. So it was already a whole community, and we were all really into punk and blues.

AllMusic: Did exploring that music in an educational setting make it feel like homework?

Sunny War: I didn't do well at that school, I ended up dropping out. I didn't really take advantage of the music program, which is why I was going there, because I just didn't know how to focus. But it was still cool to be influenced by the kids who were doing well there. As a guitar player, I pretty much went through every genre of music that ever involved a guitar. I was really into metal at one point, I was really into blues, I think it's just hearing all the ways that you can play the guitar.

AllMusic: You also play bass in a punk band, is that a necessary outlet for a different sort of energy?

Sunny War: No, because I hate punks now, I don't even care about that shit. I like punk music, but I don't even like going to shows anymore. I'll talk to somebody, I'll say, "Nice shirt," or some shit, and then they don't even listen to that shit. But I have it on vinyl. And it's this whole thing where it just feels awkward now, I don't even know if people even like what they say. It doesn't feel like a community of people, I feel like I'm a nerd and they're not. There's not enough nerds, and it feels weird.

AllMusic: You've lived all over, but you've been in L.A. for a few years now. Are you enjoying that stability or are you itching to move on?

Sunny War: Now, luckily, I get to leave a lot to go play somewhere. So I don't feel as stuck here as I usually would. But it's cool. I'd like to move to New Orleans. I don't even know how, I don't know how to be organized enough. I don't even know how I've been living here so long. At least where I live now, the apartment I live in, I've been here for almost two years. I usually have to move every year, because I usually live in some weird roommate thing, or something happens and everyone has to move. So I don't know how I've been here for two years. I never know what's going to happen.