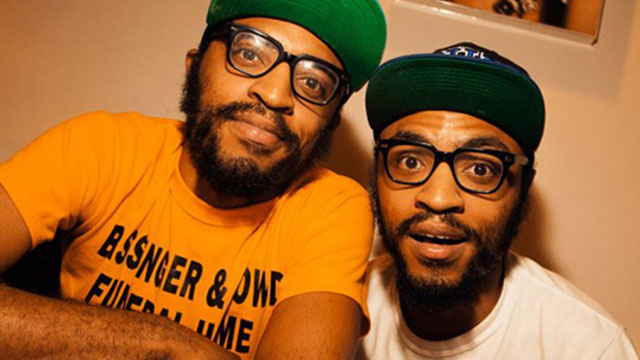 For those of us in the Northern Hemisphere, summer starts next Saturday. For many that means beaches, boats, road trips, block parties and barbecues. All of these occasions require soundtracks, and the idea of the "song of the summer" is debated every year while summer party playlists are compiled. As we head into the summer of 2014, we've asked two pairs of twin brother comedians to hit us with their five favorite summertime jams.

First up is the Lucas Brothers, Kenny and Keith, who created in the animated series Lucas Bros. Moving Co. on Fox and appear in 22 Jump Street (opening today) as dorm-mates of Jonah Hill and Channing Tatum's characters. Next week, we'll share the selections of the Sklar Brothers. We got the lists in advance and shared them with both duos, in case they cared to engage in some playful sniping at each other's lists.

That song is probably the best song to smoke to, because you don’t have to worry about the lyrics or anything like that, and it was the beat for that Fresh Prince song, so it’s nice to pay homage to that. And it’s Kool & the Gang, man. We heard “Summertime” first, but listen to the instrumental more now. Will Smith’s rap game has tarnished over the years. I couldn't even listen to his later stuff. I love Will Smith, by the way, but I fell out of favor with his music.

Randy Sklar: Kool & the Gang, you can’t not love Kool & the Gang. "Celebration" was every kid’s bar mitzvah song when we were kids, but it was also the St. Louis Cardinals’ song of the year they won the World Series, so that was the summer song of that whole period of time.

I love the Isley Brothers, man. My mom loved them growing up, so that was always one of the songs she’d play for us, and I fell in love with it. Then I started listening to the Seals & Crofts one and realized it was a little bit better. It’s interesting how different they sound, they’re dramatically different, it’s incredible. I had a phase maybe two or three years ago where I listened to it repeatedly, you know how that happens with music, you listen to it a bunch of times and then you stop and start again. I’m in that phase where I’m not listening to it as much, but there was a point where I listened to it almost every week. I had just started listening to Seals & Crofts for some reason, I was in law school at the time and losing my mind, and I got back into that song.

AllMusic: What's the earliest in the day you can listen to "Gin and Juice?"

Randy Sklar: Listening to that song in the morning is like eating sushi for breakfast. You can do it, I’m sure they do it in Japan, but it’s not right.

AllMusic: That seems like a song everyone has memorized, how long did it take you to memorize?

It actually took me a while, I guess I had to get used to Snoop’s rap style. We grew up in the Northeast, so the lyricism is a bit different, and his style of rap was a little more difficult. It probably took a year or two. It was incredible, that was his debut song. He was incredible on that one, and his rap style was so different at the time, it was hard to comprehend what he was fully doing.

Randy Sklar: I can’t argue with it, it’s such a great song. To me, it captured what that time was all about. We weren't in Compton in the summertime, but he put is there, even as white Jewish kids from the Midwest, he put us there. The fact that we, as Jewish kids, were saying, "Compton and Long Beach together, now you know you’re in trouble," why did we have any reason to say that? It’s hilarious.

Bone Thugs-N-Harmony is probably my favorite rap band of all time, and that song is hilarious, the concept of it, the fact that it was using government funds to throw a barbecue, I think that’s great. That’s probably our favorite song of the summer, it’s a great idea. I heard about them with "Thuggish Ruggish Bone," and "1st of tha Month" was the breakthrough. The second album, Eternal, that’s when we became fans. And they got us into smoking weed and stuff, so we always try and pay homage to them. It has a special place in our hearts.

Randy Sklar: So it’s about great decision-making. I appreciate that. There’s something about the summer that says you only live once, you might as well enjoy it. If that’s the gist of the song, then you have to love that. You wouldn't do that shit in the winter, you’re not going to throw a party in the winter with your welfare check, but in the summertime, it’s OK. All bets are off.

AllMusic: You grew up some in North Carolina, but you didn't put any Southern hip-hop on your list.

Check back next week for the Sklar Brothers' summer playlist as they contend for the coveted Twin Comedian Summer Songs Playlist Championship.