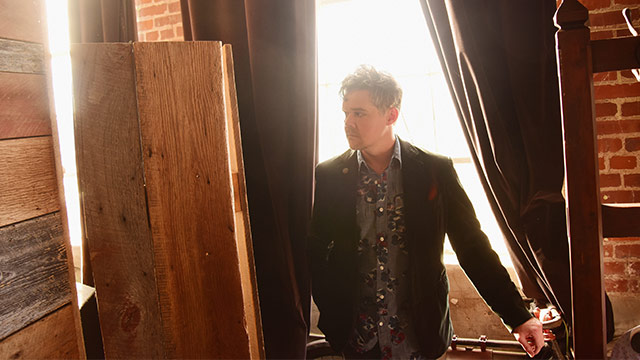 ​Gabe Dixon connects with his frustrated guitar player side on "Flow Like Wine" from his upcoming album, Turns To Gold. Hear the song here first, and find out why playing it live makes him sweat, how its lyrics inspired the artwork for the new album, and how he knows when a song is finished.

AllMusic: How did this song come about?

Gabe Dixon: I write a lot of songs with other people, so I have to come up with ideas, and one day I was set to write with a friend of mine, and it was like 30 minutes in and she wasn’t there, so I started messing around with ideas, and I had this idea for this really slow song, and I had this idea about “Slip your feet into the water, lean your head right next to mine,” and something about “let love flow like wine.” She didn’t even show up that day. It’s one of my favorites on the album, and it really inspired the album cover artwork a lot. It’s me in a little bitty boat with an upright piano going down a river towards the sunset and the ocean.

AllMusic: There's a lot of layers to the track, how do you know when to stop adding things?

Dixon: The song is the most important thing, so if it starts getting to the point where I’m not hearing the melody and the lyric and what the song has to say, then there’s too much going on, too many instruments, too many parts. I really try to sit back and see if I’m being moved by the song, and if I am, then I’m doing something right. If it’s too clouded, then I have to scale some things back.

I secretly always wanted to be a guitar player, but I kept playing the piano. So on a lot of songs, you’ll hear me try and imitate what a guitar would do. “Flow Like Wine” is like me trying to play finger-picking guitar, but on the piano. Even though it has a bit of acoustic guitar in there, the piano is what drives it and keeps it away from being a full-on country song while keeping that folky feeling.

AllMusic: Perhaps this ties into that, but it's also a very short song.

Dixon: Some songs seem to call more for a story situation, and with this one, I felt like I’d rather point to what I’m saying rather than spelling it out completely, which speaks more to the feeling of the lyrics than the length. I didn’t want to do the chorus too many times, because it’s the same thing over and over, so any more than three times on that chorus might be a bit much, and there wasn’t anything else I had to say, verse-wise. The lyrics were a little more abstract than some of the other songs I’d written, and I liked that and didn’t want to get too specific or overload it. I try to say the most with the least amount of words and the least amount of song.

AllMusic: Have you been playing this song live yet?

Dixon: I’ve done a couple of shows where I’ve played the album top to bottom, and on the album it ends and there’s a transition into another song, and it’s fun to have that transition when I play it live. I love the fact that it’s short, but it’s kind of a difficult song to sing. Sometimes when I sing that chorus, I just blow it, the falsetto goes out. So I really have to be up for it. When I’m on, I finish the song and I feel like I’ve really been transported somewhere and done something really special and the audience can really feel it and it’s really moving for them. If I’m not prepared for that song, it falls a bit flat. I don’t put it in every set, it’s not one that I can just go to yet. The more I play it, the better I’ll get at it and the more it will become a regular part of the show.

AllMusic: So you break into a little sweat when you see it on the setlist.

Dixon: A little bit, yeah, just because of the chorus, really. It’s one of those things where there are songs I play in the set that every time I play them, they go over really well, but they weren’t always that way. I have to just sweat for a while, for a few months, on that song, before I’m to the point where it’s easy to do it. That’s just part of the process of playing new songs.

'Turns To Gold' is due out on April 8, and can be ordered here.