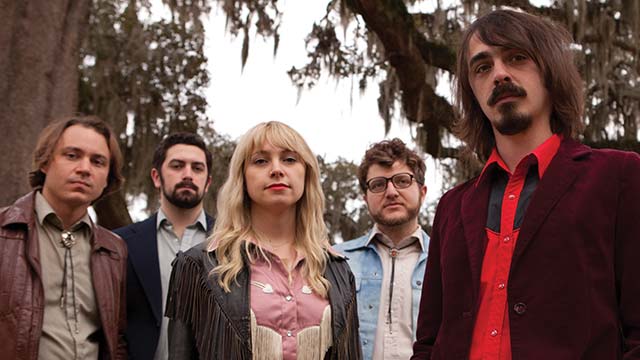 Two Universes (out March 24) is the follow-up to Louisiana-based band Feufollet's 2010 Grammy-nominated album En Couleurs. The band's Cajun-Americana fusion leads to a bilingual album, bouncing between English and French, our premiere being one of the latter. "Questions sans réponses" is the album's closing track, and combines a gentle swagger with strong, yearning female vocals. Stream the track below, and let singer, fiddler and guitarist Kelli Jones-Savoy explain the song's origins with the following quote:

"Questions sans réponses" is one of four songs in French on our new album, Two Universes. As a band that started as a Cajun band and has recorded all in French up to this point, I suppose, in a way, that this is one of the more predictable tracks on the new Feufollet album. At its core, the song is about three very universal and basic aspects of life, the world, love, and what lies ahead. I wrote it after having a kind of ridiculous bout of frustration about what to do with the rest of my life, which I'm sure everyone has panicked about at one time or another. Writing it was essentially a therapeutic "letting go" for me, and at the moment the hook of the song came to me as a French phrase so I continued writing the lyrics in French. Loosely translated, the song exclaims that you can ask the world all the questions you want but it will never respond to you, and that the only real way to answer the questions you have is to get out there and experience it all for yourself.

For more on Feufollet, visit their site.