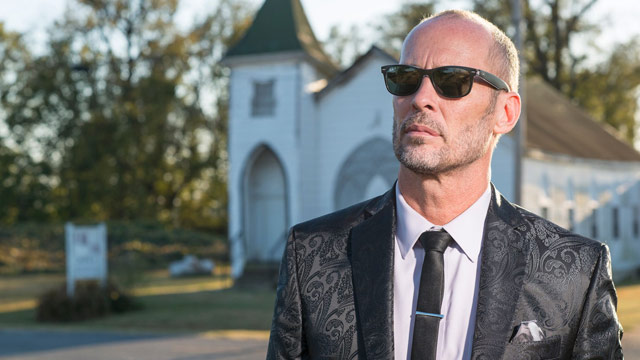 ​Singer/songwriter Paul Thorn has made a career out of blending rock & roll with roots music on albums like Mission Temple Fireworks Stand and Are You With Me?, but on the upcoming Don’t Let the Devil Ride, he dives into the gospel music that impacted him while growing up as the son of a preacher.

Thorn spoke with us about "What Should I Do," a "pole-dancing gospel song" based around his howling vocals and some exciting guitar interplay, which was tracked at Sam Phillips Recording in Memphis, as well as about the various personas he inhabits with his music.

'Don't Let the Devil Ride' is due out March 23 on Perpetual Obscurity Records and is available on physical and digital formats.

AllMusic: What's your personal history with this song?

Paul Thorn: That song is just a song I’ve heard all my life, it’s the sort of song where you’re standing at the crossroads and you don’t know which way to go, and you’re praying for guidance. It’s got a strong message of insecurity and not knowing what to next, but at the same time it has kind of a raunchy groove to it that’s almost like a pole-dancing gospel song.

AllMusic: I always enjoy when the guitars are split between different channels like they are here.

Thorn: My actual band plays on my records, and you don’t always hear that, people will bring in session players. But that’s my band playing, and there are two guitars in there. One is my guitar player, Bill Hinds, who’s been with me over 20 years, and the other was a guy named Colin Linden, who’s from Canada, he’s a producer and artist, and he’s the mack daddy of knowing this kind of music, which is why we chose him to produce the record. He played with my guitar player on that track, and they found their own spots and didn’t get in each other’s way, so you can hear them at the same time, which is pretty great.

AllMusic: Did you use a different vocal approach for this record than you would for your own songs?

Thorn: There’s a different way of singing on this kind of music. When I sing on a singer/songwriter record, there may not be much wailing or singing in a screaming type of voice, but that’s what was really common in that type of music, so I’m belting it out a little harder than normal.

AllMusic: You tour in several different configurations, do you have to remind yourself each day which version of yourself is going onstage that night?

Thorn: Yeah, every day. When you do shows night after night, you can’t remember what the next day holds a lot of times, so every day I have to look and say, “OK, what’s happening today?” and prepare for that. I’m fortunate that I have this thing that I do that can go in so many different configurations, I can do shows with just my band, shows with the Blind Boys, shows with the McCrary Sisters, so when it’s suitable, we have all these different things we can do. Then I can also do what I’ve always done since the beginning, which is a show by myself with my guitar, I have the luxury of having all these things I can do. It’s a case-by-case basis right now, but all of it’s fun.

AllMusic: Is that easy for you, jumping from one variation to the next?

Thorn: When I do the gospel show, I take on a whole new persona, we all wear suits. It’s like going to a tent revival, I have a different way of walking and talking, and it’s sort of a performance, it’s a tribute to the music I grew up around, growing up and getting to go to black churches and learning the music from them, I become this character when I walk onstage with my suit on. But the next night if I do a regular band show, I have this whole secular presentation I do. I’ve been this way all my life, when I was a kid I had a Bible under my pillow and a porno magazine under the mattress, it was dark and light.

AllMusic: Were you ever tempted to give different names to those personas?

Thorn: No, because it’s all the same thing. One thing I’ve noticed is the older I get, nobody’s all good and nobody’s all bad. There’s good and bad in everybody, and we just need to own it, so that’s what I’m trying to do. We all need to give and receive mercy, there’s times when we screw up and need forgiveness, and when people forgive us, that’s good, and hopefully one day we’ll be able to give it back, and that’s what being a friend is.