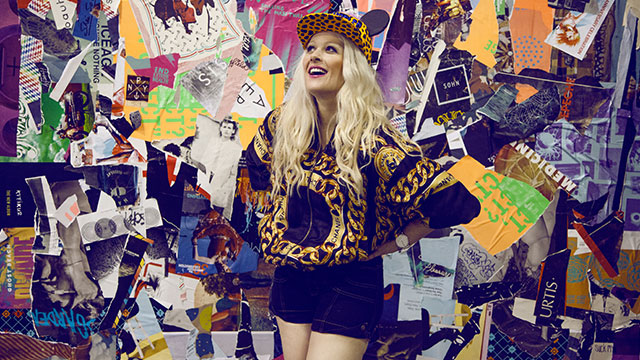 Princess Superstar has been making delightfully offbeat and playful hip-hop for 20 years, setting a template for outsize personality and image that would later be followed by artists like Ke$ha and Lady Gaga. Whether it was bragging about being a "Bad Babysitter" or directly addressing identity on "I'm White," the music was cheeky, funny, and catchy. Those songs came from her wilder days, but just because she's now a married mother doesn't mean she's any less entertaining on her upcoming EP, I'm a Firecracker (out July 15).

In our chat we learned about her interest in throwing a psychedelic twist into her music, what she's learned from teaching kids about hip-hop, and if Kool Keith ever shows up to things on time (he doesn't). Also, we have the debut for a new version of her song "Love Light Bliss," which appears on her upcoming EP, out next week (pre-order here).

AllMusic: This song sounds like it could only have been released in the summer.

Princess Superstar: I’m super happy during the summer, I love the summer, it’s my favorite season. There’s so much freedom and fun in the summertime, and that’s really reflective of this album, even though I’ve been working on it off and on for five year, you never know when anything’s going to come out. It kind of happened this way, but it’s completely perfect timing.

AllMusic: You released another version of this song earlier, what's different?

PS: The main thing is that Richard Gottehrer mixed it. He’s a major legend, he produced the Go-Gos and Blondie, he’s amazing. He remixed it, so he took it to a new level. The original guy who made the music is also a genius, Sean Lee, he’s a master of psychedelic rock, and I really wanted some psychedelic music on my EP, so he was the perfect person. He’s a musician who can make things sound like samples, I love that.

AllMusic: Did it take coaxing to get you to be OK with the guitar solo at the end, or did it make sense to you?

PS: It took some convincing, I was all for psychedelic music—I grew up on classic rock, I love that—but at the same time, I’m also pretty much a hip-hop artist and electronic artist, so I didn’t want to push the envelope, but Sean really thought it was a good idea, so I said, “Fuck it, put the guitar solo on.”

AllMusic: How deep do you get with psychedelic music?

PS: I’m a huge Syd Barrett fan, an early Pink Floyd fan, I’m kind of weird. You’re not going to talk about Syd Barrett with Iggy Azalea, you know? In the early '90s, I was in an all-girl band, we were in this indie rock thing in the '90s in New York City. There were a bunch of us, there was Uncle Wiggly and Fly Ashtray, we were all really into making psychedelic pop, very Beach Boys and early Pink Floyd, that kind of stuff. I learned how to play guitar in that band. I always loved hip-hop, so I just started doing hip-hop instead of that kind of music, but it’s always a part of me.

AllMusic: Do you think there's an alternate universe version of you who went down that hole and never came back?

PS: I love that, I totally think so. My brother just sent me a thing that says it’s definitely been proven that there are alternate universes with alternate us doing different things, so absolutely there’s some real bohemian version of me just making crazy pop music that belongs in the '60s and '70s, kind of like the Brian Jonestown Massacre or something. I hope [BJM frontman Anton Newcombe] doesn't trainwreck. I subscribe to clean living myself. They’re amazing, but I was like, “This is not going to end well,” though I hope it is. All this bullshit of romanticizing the excesses of that era, that’s just dumb. That’s kind of what this song is about. I don’t think that it’s cool anymore to be destructive and hating your life and drinking yourself into oblivion and making amazing music. That’s what this song is about, it’s about living an amazing life and being healthy and taking care of yourself and also being wild and crazy and fun, but not in a destructive way.

AllMusic: Do you think that outlook is a result of getting older or just because of what's going on now?

PS: I think that maybe it was totally cool before, like when you think about Studio 54, that’s cool, doing lines and everything, but now people are doing lines in these clubs with bottle service, it’s not cool. It’s just not cool anymore, so you might as well evolve.

AllMusic: Did Studio 54 not have bottle service?

PS: I think they were just grabbing bottles off the fucking shelves, that was their bottle service, and then having sex in the back.

AllMusic: When you hear "Love Light Bliss" and close your eyes, what do you imagine people doing?

PS: Just feeling high and happy. High and happy without substances, that’s what I imagine, people just being happy and joyful. People with flowers in their hair, leaping in fields with hands in the air and twirling, like the Sound of Music.

AllMusic: You teach a hip-hop class for kids in New York. Has working with them and seeing what they respond to impacted the music you make?

PS: Definitely. We have this section where we teach them how to freestyle and make up a song on the spot, and that always makes their eyes go really wide, and it makes the adults’ eyes go wide, too, the parents love it. It’s a universal happy thing, to make up a song on the spot, and the dancing, when we teach them dance moves. There’s so much freedom with kids, they’re just so authentically happy, except when they’re melting down. I think that there’s a lot of freedom, and it infuses my music with more freedom, too.

AllMusic: It sounds like you're really coming from a positive place. It seems like positivity is considered to be cool at some points and lame at others, do you think we're in an upswing of positivity?

PS: I think it is cool, I hope to make it cool, that’s part of my mission. I think the thing about positivity is it gets a really bad rap, because the aesthetics are all wrong, either you’re just a hippie or a yogi and it’s not very attractive, or fake positivity, “Let’s manifest happiness!” or whatever, where it seems fake. But I’m talking about the real essence of what I feel like is true. We’re not always positive, we're positive and negative, it’s like electricity. It’s not to negate the darkness, we’re human beings and there’s a lot of ill shit going on, but how do you better yourself and feel that real connection so that there is more positivity in your life, and making that cool, making that fun and not lame? Can’t you be positive and listen to Slayer? Can’t I be so positive and then love this dirty-ass music? I’d like to change the world a little bit. That’s the problem, people look at things in black and white, but if that’s making you happy, then that’s a good thing, and it doesn't matter what the thing is, as long as it’s not destructive. If punching my husband in the face makes me happy, well, it’s not such a good thing, but if listening to Slayer makes you happy, then that’s amazing.

AllMusic: We'd be remiss if we didn't try to get an inside look at what it's like to work with Kool Keith.

PS: He’s very authentic, he’s just weird and kind of crazy. He also reminds me of a child, he will do whatever the impulse is, like how children don’t really have impulse control. Working with him was amazing, it was kind of tough to get him to show up to do a video or a photo shoot, but we made huge efforts and made it happen, it’s hard to nail him down. He’s amazing, and he’s a total sport. When we did our video, we really wanted to do a Blaxploitation type video, and he was so into it and wearing the costumes and acting, it was fun. He’s great, he’s a legend.

AllMusic: No one really gets away with that at this point.

PS: Nobody really does that anymore, you don’t see that. All the big rappers have a shtick. Tyler tries to, but it’s not the same. Tyler’s too mean, he’s too evil. Keith is just pure funniness.