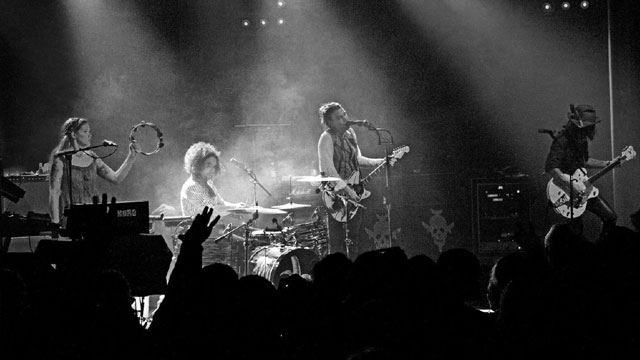 Last year the Dandy Warhols commemorated the 13th anniversary of their 2000 album, Thirteen Tales from Urban Bohemia, with a tour in which they played the album in full, and followed it up this year with a live album from a show they played in their hometown of Portland. While so many albums released in 2000 are deliberately of the era, Thirteen Tales has managed to remain untethered to any particular moment in music, with its gentle psychedelia, acoustic guitars and horn accompaniment effectively steering clear of many of the conventions of the time. Frontman Courtney Taylor-Taylor was initially loath to jump on the "let's play an album in its entirety" bandwagon, but the coincidence of the 13th anniversary of an album with "13" in the title taking place in 2013 was too good to pass up.

In celebration of the live album's release, the band commissioned a new animated video—using the audio track from the new live release—for the album's best-known song, "Bohemian Like You," which we are happy to debut here. So come for the video, and stay for Taylor's stories about doing ecstasy with a rock legend, which album he has heard more than any other, and the album titles that give him goosebumps just from speaking them aloud.

AllMusic: What made you decide to release a new video for an old song?

Courtney Taylor-Taylor: Nobody was making lyric videos in 2000, so it sounded like a good idea. We found this amazing animator, and I love the way the thing looks. We just lost our shit when he showed us the first 10 seconds of it, I was like, “Oh my god, I’m going to smoke a lot of weed and watch this video over and over again.”

AllMusic: If lyric videos had existed back then, would you have even bothered making videos with the band in them?

CTT: We used video, photo shoots, every single thing as an excuse to have a good time. For photo shoots for magazines, we would just go, “OK, but you’re taking us out for sushi and you’re buying us all kimonos and you’re buying an eighth of weed and some whippets.” We really made sure that every single event in our career was something fresh or new or interesting for us to do, because it is such a grind, this business, particularly the way it used to be. This industry was such a grind, and it was a constant battle with people who didn't have as much respect for us as we felt they should, and we certainly didn't have the kind of respect for them that they felt they deserved, so it was rough.

AllMusic: When listening to the live album, I was surprised by how out of time it sounds, it's not easy to pin it down to the 2000s.

CTT: That’s probably why it flopped when it came out; it didn't get big until 2002. We've always avoided any sort of the weird trends of the time, besides emotional clarity and power. As far as the production goes, if we hear anything that sounds currently right now, we get rid of it. If we say, “That hi-hat sound is just too right now,” then we’re going to thin it out and make it a little crisper, or we’ll turn it down, whatever. That has been our single most important guide in mind, is that we never sound currently trendy, I would be so horrified if somebody said, “They’re just trying to be hip right now,” that’s about the last thing any of us in this could ever tolerate, is to be like what’s going on now.

AllMusic: On the other hand, if you go too far in the other direction and try to avoid too many things, it could come out flat.

CTT: I tend to only write songs when I feel that it’s my last desperate cry for help before absolute abject suicidal depression, and it works. It’s been working for me since I was 14 years old, picking up a guitar and noodling and stuff comes out, you make up a song or a few lines and a melody about your whatever it is that’s fucking with you emotionally at the time, and you feel better, it’s absolute salvation.

AllMusic: That sounds like a lot of pressure to put on one emotional outlet.

CTT: You’re alone by yourself, so there’s only hope, there is no pressure. It does come out. When you start fucking up is when you start thinking about what other people are going to think of it, that’s the risk. Generally I’m not a pro enough songwriter to even be able to think that kind of stuff, so then by the time it’s in the studio, the only worry is that it’s going to sound trendy.

AllMusic: Are there any albums that are very much of their time that you love?

CTT: Weezer’s first couple of records were made to succeed in that time, with all the dumb shit at radio, to just be everything that was at radio, but smarter. They’re still great, they still sound awesome, but they definitely are like, “Well, that sure is the '90s for you.”

AllMusic: What are some songs that you think are absolutely perfect: perfectly written, perfectly produced, perfect lyrics?

CTT: I was never a lyric guy. I was very young when I realized that lyrics blow, most of the time, and can make me embarrassed that I ever liked the song, so I ignored lyrics my entire life until I had to do it myself, and then I was encouraged to listen to Bruce Springsteen, because that is a fucking lyricist, if ever there was one. I also listened to the Clash’s lyrics, because you will not be embarrassed. I’m such a producer-head, I love the studio aspect and what sounds are doing and how they work together. So “Don’t Bring Me Down” [by ELO] is fucking perfect. That’s as perfect as they come. I mean, what the hell? Another one from that same era is ABBA's “S.O.S.,” it’s incredible. That big Foster the People song ["Pumped Up Kicks"] is really fucking amazing, it deserved to be the hugest song in the world for sure, it’s so completely superior to anything anyone else released around then. I love that song. Any time a hip project has a big hit, there’s generally a reason for it.

The first two Shins records were truly above and beyond anyone else in the world at the time: Chutes Too Narrow and Oh, Inverted World, those are…I just got goosebumps saying the titles and going there a mentally, both of my arms just went numb and tingly and the hair stood up on the back of my neck. “Gold Lion” by the Yeah Yeah Yeahs fucked me up, and the Raconteurs, “Steady as She Goes,” those are amazing. They work time and time again. Both of those songs, I must have listened to them a thousand times, and never wore it out, never got tired, never got anything but inspiring.

AllMusic: Is there an album you think you've heard more than any other?

AllMusic: Everyone in music has stories about meeting their heroes, and they're often either nightmares or a life highlight. Did you meet any of your heroes early on?

CTT: I had one amazing experience where Robert Smith and I just sat up in this Greek hotel ordering more and more white wine, getting more and more fucking wasted. He was so completely unguarded, and he was also truly interested in trying to help me avoid the pitfalls that were about to happen to me. He was a very, very unique and special guy for doing that, we sat up all night until the sun came up. He was really the kind of guy that Michael Stipe and David Bowie weren't ever for me. One time Joe Strummer came and found me and was like, “Look, mate, you are my favorite, you are the single greatest guitar rock band in the world, you’re the only rock band I give a shit about, what are you doing for the rest of the day?” It was at a festival and we’d already played, and I said, “Well, hanging out with you, Joe,” and he said, “Stick your tongue out.” So we tripped on ecstasy for the rest of the day, and it was fucking amazing. We didn't have any deep conversations, we just had fun.