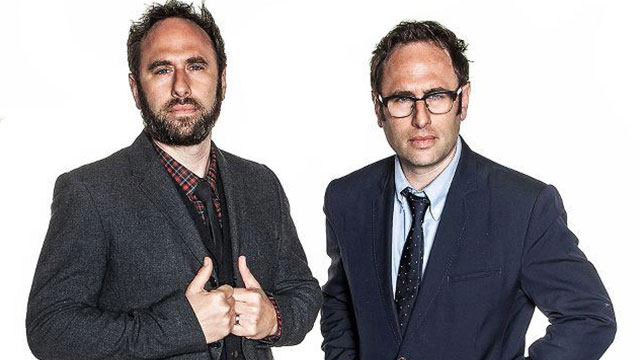 For those of us in the Northern Hemisphere, summer starts this Saturday. For many that means beaches, boats, road trips, block parties and barbecues. All of these occasions require soundtracks, and the idea of the "song of the summer" is debated every year while summer party playlists are compiled. As we head into the summer of 2014, we've asked two pairs of twin brother comedians to hit us with their five favorite summertime jams.

Last week we heard from the Lucas Brothers, and this week we have playlist from the Sklar Brothers, known for their ESPN Classic show, Cheap Seats, the Sklarbro Country podcast, and their stand-up specials, including their latest, What Are We Talking About? They may be affiliated most closely with the world of sports, but as we learned in our conversation, their music fandom runs deep. They sent us a list of their five favorite summer songs, then we chatted on the phone with Randy Sklar to go deeper. When it suited them, the Lucas Brothers dropped in with some commentary of their own.

Randy Sklar: As artists we can relate to them in a major way in terms of how they suffered a serious backlash after their first album, but they showed why they’re so good with this album. I remember the anticipation for this album when it came out, they had to deliver one on such a high level, and I felt they knocked it out of the park. I felt like that album was the soundtrack to last summer, without a doubt, you just feel the summer breeze. I know they recorded part of that song "Step" inside someone’s apartment, you can hear the train going by a little bit, the windows were open and you could feel the summer breeze. Summer in New York is the best, we lived there for five years. It’s so hot and so oppressive, yet you actually have fond memories of it.

To me, they just represent what summer is all about. It’s a Saturday, you slept late, it's time to make some coffee and put on the song that will start your summer weekend, wherever you’re going to go, and put on the album. I just put that thing on and let it play. It’s my favorite song, and Jay’s, as well. We came to a consensus on that album. The organ, the vocals, the hook, these guys are so great at creating songs. To me that’s an album that’s something you listen to on the way to the beach, especially if you were out in the Hamptons, or if you were in the New England area. To me it’s music about Nantucket, and even though I've never been, I feel like I have, because I listened to that music. It’s going to your beach house, going to your summer place, that feels like this is the music that people would listen to on the way out there.

Lucas Brothers: We fuck with indie rock, but it’s not really my summer sound. We've never been to Nantucket, so I don’t know if that’s true or not.

Beach Boys - "I Just Wasn't Made For These Times"

RS: I’m going to blame my record player for this one. I grew up enjoying the Beach Boys, but it felt like our parents’ music more than ours. But I think once you go to that place where you’re like, “I’m going to get a record player and start listening to records,” you lose the, “Hey, that music belongs to that generation, this music belongs to this generation,” and you start to say, “What are the best albums out there?” Hands down, Pet Sounds is incredible, and I look at my kids and they love it. My six-year old loves that album, and she knows how to put something on the record player and play it. I put all the records away one day, my kids had come home from school and my six-year-old had put it on to listen to it when I wasn't around. I was like, “I have done my job as a parent. I did it. I don’t have to do anything, you can do whatever you want. If you want to become a stripper now, go for it, I did my job.”

I think this song is, for me, is the crowning jewel of that whole album. There are great songs on there, "Wouldn't It Be Nice," "God Only Knows" and "Sloop John B," but that song is the centerpiece. I knew the song but didn't really know it that well, and now that I listen to it, I’m like, “It’s the best.” That song has the Beach Boys summer sound, beautiful harmonies, you feel like you’re at the beach, but there’s also some depth to it, more than two hot rods racing down the strip. If you’re an artist, you can’t be the most popular kid in your school. On some level, at some point in time, if you’re making anything significant, you probably felt like you were on the outside, or that you didn't fit into some scenario that you were in, and I feel like that’s what this song was about. Sometimes that’s what summer is about, you go to the party, you’re off to the side, it’s not all great, but it is something that people can relate to on some level. It’s a timeless message, it’s amazing. He doesn't say that he’s not made for any time, that he doesn't fit anywhere, but that he’s not made for these times, which is interesting.

Lucas Brothers: “I Just Wasn't Made for These Times” is probably the saddest summer song ever. I don’t listen to that and think, “Hey, it’s summer.” There are so many other songs, they have a bunch of summer songs. I guess Brian Wilson was at the end of it on that one.

Naughty By Nature - "Feel Me Flow"

RS: Jay and I put this on for pure emotion. I remember this song coming out in summer, the for the video, it was super hot outside, there were slow motion shots of the camera up above where Treach is just dumping a whole thing of water on his head and shaking his dreads back and forth. It was a beautiful video, and the music and everything is all about a super hot summertime jam. When they came out, we were in college and they had those anthemic songs, so this song was a little less known, but I just remember when the video came out, it was in the summer, it was a video about summer, and on an emotional and guttural level, it was like, “This is summertime.” The video’s imagery just plants that song in the summertime, and that was like, “This is it, this is what a summertime party is,” when it’s so hot that all you can do is listen to music like this, that’s what’s going to cool you off to go jump in a fire hydrant.

AllMusic: It feels a bit more realistic than the "Smooth" video, which has a similar scenario.

RS: "Smooth" and "Matter of Trust," the Billy Joel song, where it was so hot that they’re practicing down in the basement, that was a summer thing, but I felt the song didn't really fit it. This feels like the song is a keyboard thing happening with very summery drops of water falling down, beads of sweat, it’s great, you just think "summer jam."

AllMusic: The Lucas Brothers called you out for calling the song "Here We Go" in your list.

The Hold Steady - "Stuck Between Stations"

RS: This is a song you put on when you’re heading to a summertime party. People say, “Where has rock and roll gone?” and I think these guys are doing it on such a level...if you've ever seen them play live, they’re like Springsteen meets Elvis Costello. It’s very much of my generation, and he’s our age, he’s speaking about things we experienced as kids, and so specifically. As an artist, when anyone asks how do we do what we do, how did I get into this, we say that you need to be specific, you have to carve out your own voice, and that’s what they've done, especially in his songs and his lyrics.

RS: A lot of their music is about snow falling softly in the mountains, stuff like that, but I do think this song has an air of “let’s go out on boats in the summertime and travel through Greece.” It’s like you wake up and there’s that morning breeze, and that’s what this song feels like to me. The harmonies in the background are like a breeze through it. I think this band is incredible, complicated and smart, and I think this is one of their best songs ever. It feels like a song you play in the morning, on a weekend, especially, and it’s beautiful.

AllMusic: Have you ever sailed on a boat in Greece?

RS: Never, but this is what I would assume it would feel like. I've been to Greece, and I can only imagine that this song would be going through your brain. We’re not big sailors, but a song puts you in a place and gives you a memory of something you've never done before. It’s like, “Oh yeah, maybe in another life I did that.” That’s the beauty of well-crafted art, is that it puts you in a place that you have never been, yet it does such a good job of painting a picture that you’re like, “I was there.”