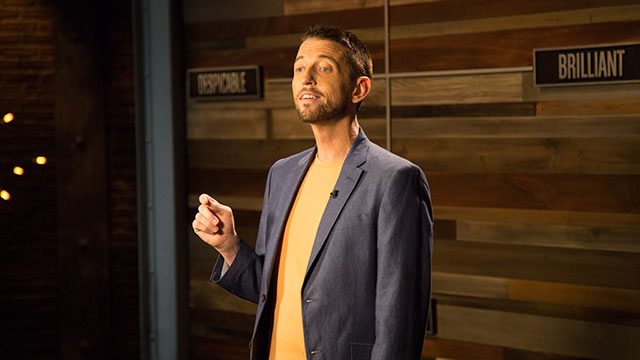 Since the sudden demise of Chappelle's Show 10 years ago, co-creator and writer Neal Brennan has been busy performing stand-up, writing for the Academy Awards and the White House Correspondents' Dinner, and hosting the podcast The Champs alongside Moshe Kasher. His newest venture, The Approval Matrix, premieres tonight on Sundance TV. The show is based off of the New York magazine feature of the same name, and often requires its panelists to make snap claims about items that fall into superlative categories (example: "What's your favorite single episode of television?").

We decided to get in on the concept by coming up with some particularly precise categories related to music and letting Brennan make and justify his picks. Find out what song he listened to a homeless man sing for two hours straight, the songs he's embarrassed that he paid money to purchase, and which hip-hop superstar's SUV he once cut off in a parking garage. For a more TV-centric conversation, check out the chat Brennan had with Sidereel, our small screen-oriented sister site.

AllMusic: What's a song that you loved as a kid that you can't stand as an adult?

AllMusic: How about a song that's either really vulgar or ignorant, but you love it regardless?

NB: "Ain't No Fun (If the Homies Can't Have None)" by Snoop is my favorite song about running a train on a woman. I can’t think of one that tops it, and also it’s on an unbelievably good record. I remember thinking that I didn't like the cartoon on the front, it was like my cousin made it. In a way it reminded me of the inside cover of Appetite for Destruction, where it’s that sort of rape motif. [Doggystyle] wasn't a rape motif, but there was something kind of profane about it. Chappelle one time said something about Tupac and Biggie, maybe even when they were still alive, he said, “These guys are incredibly prophetic and deep, and then on a lot of songs they just sound like they’re 22.” That goes for Snoop, too. Like on “The Shiznit,” he says he did it in one take and didn't write it down, which everyone says, but for some reason I believe him, he was just so inspired.

AllMusic: How about the opposite, a song that's trying to be profound or thoughtful that you can't tolerate?

NB: Either "Where is the Love?" by the Black Eyed Peas or "Mr. Wendal" by Arrested Development. Both songs make me cringe. "Mr .Wendal" sounds like it was written by a bunch of freshmen in high school, they might as well have a lemonade stand. “Homelessness is weird!” I never once thought, “This is cool,” it was just so earnest and goofy. It was like P.M. Dawn, they were in the P.M. Dawn camp. I remember KRS-One threw them off the stage once, that was funny. It was goofy as hell.

AllMusic: I think "Where is the Love?" is the first time I was aware of the Black Eyed Peas.

NB: I feel like it was in a McDonald’s commercial or for a charity or something. It also felt like, “Oh, these record companies can make anything a hit that they want.” Not to bring Dave up again, but he said he used to smoke weed with them all the time and then at one point was like, “What happened?” They used to open for the Roots, they were cool. Then once you get a taste of that level of money, it’s like, “All right.” Also there’s weird security in that pop shit. My friends who are musicians all say Will.i.am is a good musician, and I have to say, I really like some of his beats, I really think the “Boom Boom Pow” beat is awesome, I like his beats.

AllMusic: There's a part about "Nations droppin' bombs/Chemical gasses fillin' lungs of little ones." It took eight people to write that song.

AllMusic: What's the song you've heard the most that you like the least?

NB: Shai, "If I Ever Fall in Love." I was working the door at a comedy club in New York called the Boston Comedy Club. This was right when that song came out. Now imagine a homeless guy with a syrupy good voice singing that over and over for hours. It was so goddamn funny. I never even really saw him, that’s what’s fucking crazy about it, he might as well have been on a rooftop or something. It was for hours, just ad nauseam. I've never heard a human skip before, but it was like he was skipping and kept singing the same song over and over. It wasn't even the whole song, it was just the hook. I think those guys were on the BET awards recently and it made me laugh so goddamn hard.

AllMusic; What's a song that other people seem to hate that you find yourself defending?

NB: "Turn Down for What." It’s an awesome video. It’s really built like a sketch, it has the structure of a sketch where you see the premise and are like, “What’s going on?” and slowly realize, “Oh, this is just a world where people are driven insane by this song and it makes their genitals lose their genital minds.” The pan at the end to the guy’s dick, it’s amazing. They went above and beyond, it’s a fully integrated piece of art.

AllMusic: Who are the artists at the far poles of your musical spectrum as far as heaviness and softness go?

NB: I like anything by Death From Above 1979. I got introduced to them by the Human Giant sketch show, they did the theme, and I was like, “Uh oh, what's this?” On the other end, I'd say Scott Walker. I first heard him in the Radiohead documentary Meeting People is Easy. The whole documentary is about how miserable the road is, which was an interesting take for a documentary, and so it was about the misery of the road and they play that song during a sequence when they’re in New York and they’re saying at the same hotel that I’m at right now, the Soho Grand. I didn't know what the song was, and once I figured it out, I was like, “I like this song." So it reminds me of the documentary but also it’s this really melancholy song. There’s a documentary about him that’s really cool, he’s one of those mythical dudes, like a Shuggie Otis guy, he only made one record and disappeared. He’s a real dyed in the wool weirdo.

AllMusic: And he's probably not singing about the little ones and chemical warfare.

NB: If he did, I’d buy it. I’d be like, “OK, this guy knows what he’s talking about,” and it wouldn't be written by seven people.