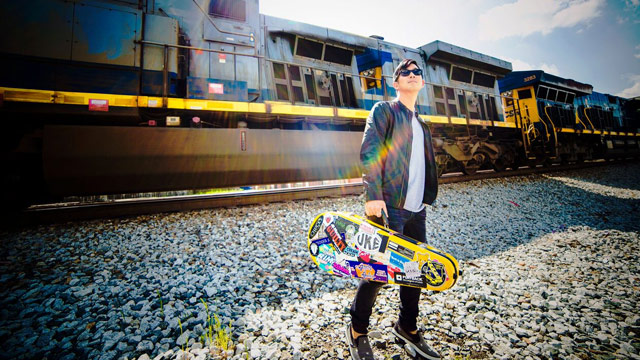 For 15 years, Jake Shimabukuro has been expanding the possibilities of the ukulele as an instrument, bringing it from its role as a cornerstone of Hawaiian music into the worlds of rock, jazz and classical music. This January, Shimabukuro assembled a trio and went into the studio with no music written beforehand, in hopes of coming up with some decent ideas and maybe recording a song or two. Six days later, they had recorded Nashville Sessions, a full album of original compositions, written on the spot and recorded live.

In addition to debuting the full album below, we also talked to Shimabukuro about the daunting task of conjuring an album out of thin air, the influence of progressive rock and jazz on the record, and the three mandatory elements of all good music and performances. Nashville Sessions is due out September 23.

AllMusic: How stressed were you the night before going into the studio, knowing that you didn't have any music written? That seems scary.

Jake Shimabukuro: I remember saying to myself, “I have to go to sleep early, I want to be fresh, I don’t want to be tired,” I tried to get in bed by 10, and then it was 11, and I can’t fall asleep, then it’s after midnight. We got into the studio and I was nervous, because it’s weird not having music to go into the studio, to not know what you’re going to do, and I’d just met the drummer that day. But on the other side, there were no expectations for those six days, we didn’t say, “We’re going to try to record an album,” we just rented the studio to jam and have fun recording and seeing what it would feel like, maybe get one or two tracks, but we had no idea that we were going to walk out of there in six days with a full record. I probably didn’t sleep more than 10 hours in those six days, I was having such a great time.

AllMusic: You've said that you were going for a jazz trio feel with some progressive rock elements. What were you ultimately able to take from each of those styles?

Shimabukuro: As far as the jazz trio, just to record live with no editing, to go in there and play and not worry about overthinking things, just let things happen naturally. We had basic guidelines for what we were going to do, but once we started we had no idea where we were going to go with them. We took two or three passes at each song and stopped and moved on to the next one. In the end it captured some really great moments that we never could have planned for, they just spontaneously happened. That’s the cool thing with some of those old jazz records, “How did they ever come up with that?” When you watch their interviews, they just say, “We were just playing and listening to each other.” They’d react to what they were hearing and that’s how they came up with all those cool textures.

I also used a lot of overdriven sounds on the ukulele, some distortion pedals, some analog vintage gear, tape echo machines, This record was produced by R.S. Field, and he produced records by Webb Wilder and Sonny Landreth, who’s one of my all-time favorite slide guitar players, so he loves rock and roll, too, so I think he also played a key role in getting the warmth out of the ukulele and that drive, the rock side of the instrument to really come out.

AllMusic: The song "Blue Haiku" takes things pretty far in both of those directions, how did that track come together?

Shimabukuro: That’s one of my favorite tracks on the album, I love the warmth of the instruments, especially the bass. At first, it was a no-brainer that it should be recorded with upright bass, so we ran through it a few times and tracked it, and we were about to go on, but then at the last minute we decided to track it with the electric bass to get more sustain out of the notes. Once we sat down and played it through with the electric, it changed the whole vibe and approach of that song, that led into that whole solo section. Originally we didn’t have that, it was very short. I remember at some point I looked over at the guys and went back to that bridge riff, with no plan at all.

We’ve been playing it live, and it feels great. This is the first time we’re playing these pieces, so there’s a freshness to it, and we’ve been able to live with the songs and do subtle things to the arrangements. I don’t think we could ever recreate what we did on the album and make it feel the way that the album felt. When something unexpected happens, you can’t recreate that, but now we have the opportunity to take these songs and put a little more thought into it. When people hear the record and see the performance, I don’t think they’ll feel, “Oh, I miss this, I miss that,” they stand on their own.

Shimabukuro: I go out with the same energy whether it’s a festival or a theater or a club. That doesn’t mean every song will be intense and aggressive, but even with the ballads, you have to give it your all every night, with that conviction.

I look at it as a very physical activity, very mental and emotional, those three elements go hand in hand. That’s how I’ve always felt about music. In the beginning you just develop the physical parts of playing your instrument, getting the muscle memory and the dexterity to move your fingers and your hand, then the second tier is the mental aspect, the philosophical side, your taste and your style that you develop and the choices you make, why you play this note over that. Then you have the spiritual, soulful, emotional aspect of it, that’s the stuff beyond the physical and the mental, the thing that gives us life, it is what connects us all through any art form, what brings us together to experience this thing. It doesn’t matter what type of performance it is or where it is, it’s about making that connection, that’s what our goal is every night, to make that connection with the audience, seated, standing, lying down, listening in their car, watching on YouTube, you want to make that connection, and if you can make it with another person, your art becomes real. That’s when it exists, and it’s a beautiful thing.