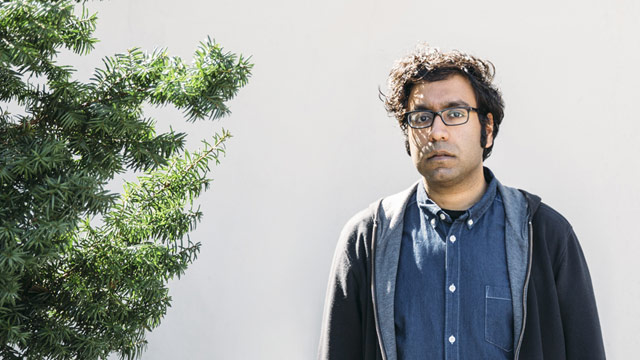 On the heels of the release of his new Netflix special, Warn Your Relatives, and a fresh wave of conversation around his documentary, The Problem With Apu, comedian (and former college radio DJ) Hari Kondabolu was excited to take a breather to talk music. In our conversation we managed to surprise him with how much he references musicians in his act -- the night we saw him, he mentioned the Velvet Underground, Nico, Neutral Milk Hotel, Ginuwine and the Cranberries in his set -- which indicates his level of enthusiasm, even if he admittedly stopped getting into new music around 2004. He spoke with us about his difficult separation from Weezer and subsequent interactions with Rivers Cuomo, the music from his hometown of Queens that means the most to him, and appreciating music made by problematic individuals.

AllMusic: There's a riff in your new special that requires your audience to remember Shaggy's "It Wasn't Me." Were you confident that would work?

Hari Kondabolu: It was only tricky the first time I tried to do it. I was like, “I can’t do this,” and then I tried it, and it worked to such a degree that I was like, “What?” I knew that it would get some laughs from people who might remember it, but that song has somehow lasted for this long, and it’s an absurd song.

AllMusic: What about when you do colleges, do younger audiences know that song?

Kondabolu: They still know the song, it’s really weird. It was shockingly effective. I debated whether to put it in the special because of that, but then I thought, “Some jokes are for me,” and that joke was for me. Once it started working, I never questioned it. There’s a phenomenon here I was not aware of.

AllMusic: I've heard that opening for bands can be a nightmare for comedians. Is that an experience you've had?

Kondabolu: I only opened for a band just once, and it was well into my career. It was the Julie Ruin, because I’m friends with Kathleen Hanna. I was hesitant, even though I’d imagine her fans are the closest things to my fans in the music world: sensitive, soft people who have similar values. So she came out before to introduce me, but even though it was just an introduction, it still felt like I was following Kathleen Hanna at her show, so it took a joke and a half or two before the audience was like, “Oh, he’s OK.” Stand-up has this reputation for being mean and being mean to marginalized groups and women, which I get but I don’t think is the fault of comedy, but more because society is fucked up. Once I broke through, it was great. It felt like one of my shows.

AllMusic: How does one become friends with Kathleen Hanna?

Kondabolu: She used to watch a show I was on called Totally Biased With W. Kamau Bell, which was so heartfelt and political and personal, which is really her style. She came on as a guest once and I introduced myself, and she was like, “Oh yeah, I know who you are, I’m a huge fan,” and I was like, “What, how are you a huge fan of me?” Then she heard my record and loved my record and gave me a quote for it and said that I was punk as fuck, which is so not true, but is very sweet. When you become friends with people you admire, it makes me feel like I need to be a better person to justify this friendship, it makes you feel like, “If you’re going to vouch for me, I need to never disappoint you."

AllMusic: You're from Queens, which has a rich musical history. Did you have a go-to hometown act?

Kondabolu: It was Tribe. It was the early 90s, and I remember in fourth and fifth grade we’d have class parties, and we were blasting A Tribe Called Quest, and I never thought that was weird. But fourth and fifth graders in the rest of the country probably weren’t listening to A Tribe Called Quest. We would listen to Tribe, De La Soul, to us that was New York music. That was a big part of my childhood, the same thing with Biggie and that 90s hip-hop. I remember people listening to Nas and splitting a headset and listening to Illmatic, and five years ago I was on a train and saw two high school kids, an Asian kid and an Indian kid, splitting headphones and listening to Illmatic and dissecting it, which is exactly what I’d have seen 15 years previous. It’s historical and it’s home.

I feel like people forget Queens, but it’s so pivotal and so diverse. There was certainly pride in Tribe, and I listened to Tribe a ton preparing this special. The record that came out after Phife died, I was just mesmerized by how they could make a record that was so timeless and yet so consistent with their voice. It didn’t sound old. It’s so inspiring in a post-Trump world, the fire is there. There’s even a Tribe lyric in the special, on the last joke, and very few people catch it. That’s a little wink to home and to them. People were like, “That joke doesn’t really go anywhere,” and I was like, “It’s not about that, I have other punchlines that follow that, this one is for me.”

AllMusic: Did you ever hear from Weezer after your bit about them from your 2014 album?

Kondabolu: Rivers Cuomo started following me on Twitter, and I was like, “Hey, Rivers…I guess you heard my record?” And he was like, “No, should I listen to it?” and I was like, “This guy’s totally fucking with me.” I said, “I wrote a joke that you might not like,” and he said, “Yeah, I heard you wrote a joke about my band,” and he won’t get into specifics, but he knows. And immediately I melt and am like, “I was the biggest fan of Weezer since I was 14 and I saw you play ‘Say It Ain’t So’ on Letterman in ’94 and it changed my life, I’m going to be on Letterman next week and I keep watching that to remind myself…” I totally became a dork. He’s so weird that I don’t know what even registered, but it was really cool.

AllMusic: Did the green album slam the door for you right away?

Kondabolu: I tried so hard to like green. It didn’t slam it shut, but it slowly shut. I waited for that record for so long, like six years. I was so upset, I listened to it so many times thinking I’d missed something, hoping there was more, but it was just 29 minutes and it was awful. I had listened to the bootleg, which sounded all right, and I was on eBay and Napster trying to get things that were unreleased to have a Weezer fix, or hear bands that sounded like Weezer. When I got at my most desperate, I’d listen to Weezer songs and speed them up, so it sounded like the Chipmunks singing Weezer, and it still felt like a new Weezer song. I’ve never been that obsessed with a band. The green record broke my heart, then Maladroit broke my heart, and then the last one I listened to was Make Believe, I bought three more records, just hoping. They’d always say “it’s a return to form” and I’d say, “No, it’s not…”

AllMusic: Are there bands that never fell off for you?

Kondabolu: I would have said the Pixies, but those last two records…although it’s hard to count them as Pixies records without Kim Deal in the band. They’re not bad records, they’re just Frank Black records. It feels like Frank Black with the Pixies as his backing band. How can it be a Pixies record, his voice is gone, he can’t scream like that anymore. Kim’s voice was a perfect mix of raspy and sweet.

But speaking about the idea of a band that has no wrong, I actually have some sympathy towards Weezer now, as someone who’s now made multiple albums and a special. You change as a person, yet there’s some expectation. If I get married and have a kid, my life’s going to reflect that, but are people going to complain about it? Is that bad? It means that I’m growing. I can imagine you make something you want to make and are being held to this ridiculous standard. At the same time, those Weezer records do suck, I’m not taking away from how shitty they are. But there is that sympathy I didn’t have before now that I’ve released my own stuff.

Like Cap’n Jazz, they hadn’t played together in 20 years, and now these men in their 40s who have lived their lives and toured with other bands for much longer have to reunite to play songs that they made when they were children? I’d hate to read my high school poetry or do my high school jokes.

AllMusic: The Smiths seem like the last huge band that hasn't reunited.

Kondabolu: Which I think is OK. I’d love to see them live, but after seeing what happened to the Pixies and everybody else…and Morrissey is such a dick. The music is so good, but he’s such a piece of shit in so many different ways.

AllMusic: Is Morrissey the person who bothers you the most while you still enjoy their music?

Kondabolu: Yeah, probably. There’s always that cringiness where I don’t know what to feel. With movies it’s easier, because there’s such a degree of separation, but music is so direct. But Morrissey, with his anti-immigration stuff, and how he says things just to be shocking…but at the same time, “This Charming Man” is so good.

“Frankly Mr. Shankly” is a song about him working at some place, he really wants to be an artist and is trying to express to his boss how he’s better than his job, and he tells Shankly and Shankly shares his poetry to try to relate, and the Morrissey’s like, “You write poetry, bloody awful poetry,” and I’m like, “You dick. You whine and complain, you open up to him, he opens up to you, and you’re a dick.” And “Girlfriend in a Coma,” you don’t have the courage to break up, so you’re just saying all this shit now that she’s in a coma and you hope she dies…it’s so fucked up and funny and brilliant. As a character, he’s ridiculous and hysterical, but he’s such a dick.

'Warn Your Relatives' is now streaming on Netflix.