We Got It from Here... Thank You 4 Your Service Review

It seemed like the story of A Tribe Called Quest ended with the sad passing of original member Phife in early 2016. It began with their glory days as one of hip-hop's greatest acts to years of sometimes bitter estrangement, then hit a high point with the group coming together in 2015 to celebrate the 25th anniversary of their debut album People's Instinctive Travels and the Paths of Rhythm. They had a surprise up their sleeve, though. On the night they performed on The Tonight Show, the four original members of the Tribe decided the time was right to hit the studio and make a new album. Repairing relationships was the first step and once that happened, the group (minus Ali Shaheed Muhammad, who was in Los Angeles working on the music to Luke Cage) holed up in Q-Tip's home studio and started working on their comeback, We Got It from Here... Thank You 4 Your Service. Q-Tip held down the producer's chair with a mad scientist's flair, searching near and far through his record collection for inspiration. Tip, Phife, and Jarobi brought rhymes that sounded like they'd been sealed up since the early '90s, then broken open and served fresh. Old collaborators Busta Rhymes and Consequence dropped by to add their skills and energy; new artists like Kendrick Lamar and Anderson Paak, who grew up on the Tribe, dropped by to add verses, and some big names like Andre 3000 and Kanye West jumped in feet first, especially Andre, whose rapid-fire verses with Q-Tip on "Kids" provide one of the record's highlights. Jack White adds some of his guitar heroics on a few tracks and Elton John makes a cameo as well, singing the hook of the very odd "Solid Wall of Sound."

The sheer number of guests, the long wait since their last album, the shifting tides of hip hop -- all these factors could have led to We Got It being a disappointment. Amazingly, it turns out to be almost the exact opposite. Thanks to Q-Tip's visionary and pleasingly weird production, which draws from golden age hip-hop, old-school jazz, odd samples, dub reggae, and interplanetary electro, the fact the neither he nor Phife have lost even a small percentage of a step, and the seamlessly integrated contributions from the guests (especially Paak on "Moving Backwards"), the album is vibrant, intense, and alive. The group sound like they're having a blast on party songs like "The Donald" or the buoyant "Dis Generation," get mad as hell on tracks like "Space Program" and "We the People," and generally come off like they're still the greatest. This is no nostalgia trip or callous comeback. It's a giant exclamation point on the end of a brilliant career. It's also a tribute to the everyman genius of Phife, a widescreen look at the record-making skills of Q-Tip, and most importantly, it's a pure, undiluted, joyous thrill to have the Tribe back and still sounding this vital. 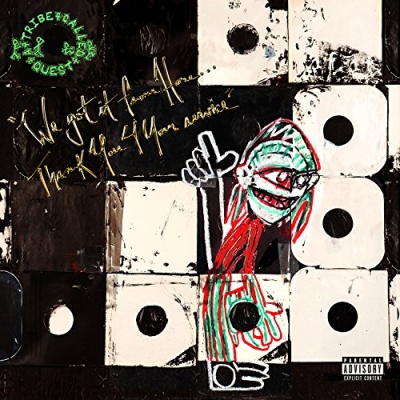 We Got It from Here... Thank You 4 Your Service Album Information