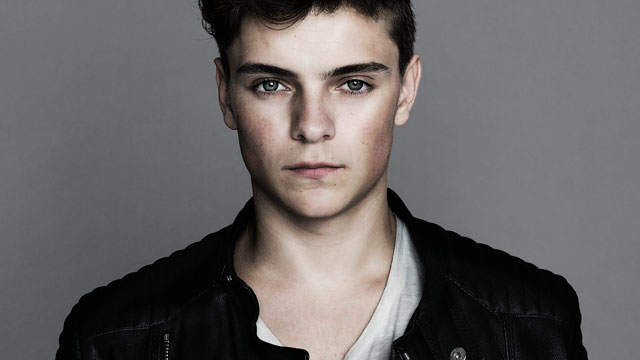 Fresh-faced 18-year-old Martin Garrix has it all going his way right now: a globe-trotting itinerary of some of the biggest music festivals on the planet, a slot on the all-star roster of Justin Bieber manager Scooter Braun's School Boy Records, and what look like some really, really expensive sneakers. The Dutch DJ was one of the featured artists on the dance stage at Lollapalooza earlier this month, and drew a monster crowd with his high-energy set, punctuated by a barrage of pyrotechnics, a rarity at the festival this year.

We sat down with him for a quick five minutes backstage before his set to talk about how carefully he reviews his performances, an upcoming collaboration with another rising star, and the show that nearly brought him to tears. Also, you can check out the video for his new collaboration with Afrojack, which was released this week.

AllMusic: Do you prepare differently for an outdoor show than an indoor show?

Martin Garrix: There is a small difference, but inside or outside, the people are there to see you, so I play a lot of more energetic stuff. For me, it’s more about the moment. I mainly just look at what the crowd wants in that moment, and inside or outside, it doesn't matter.

AllMusic: At festivals like this, do you ever get to run into any of your musical heroes?

Garrix: At Coachella, I was onstage and I looked back and saw Paul McCartney giving me a thumbs up. After that, I called my dad, he’s the biggest Beatles fan, and he was like, “No, fuck you, Martin, fuck off…” Because he was coming the second weekend and Paul was at the first weekend. As soon as I got offstage, he’d already disappeared. It was pretty crazy.

AllMusic: Have any of those interactions led to collaborations down the line?

Garrix: Everybody who I work with, it’s never been like the label put us together, it’s because we got to hang out and party and I played them some of my stuff, and they say, “Oh, I like that.” Like Ed Sheeran, I played him some of my stuff, and he goes, “I really like it,” he played me some of his stuff, so I played him a chord progression and he said, “This sounds dope,” and before we knew it, we had a collab. That’s something I have coming up soon, is a collab with Ed Sheeran.

AllMusic: What did you know about School Boy before you signed with them in America?

Garrix: I knew that they pretty much rule the game and they’re on top, they know what they’re doing. For me, it was interesting, and for them, because they’d never worked with an electronic dance artist before. That’s maybe part of the reason it’s going so great right now, they don’t have the normal standard routine, they have their own vision, and together with my European management, who specialize in electronic dance music management, it’s like a dream combination. It really pays off, what has happened in the last year has been an insane ride for me.

AllMusic: This kind of music seems like something that you make in isolation. Is the transition to performing it in front of massive audiences jarring?

Garrix: Of course, I’m still nervous before some particular shows. In the end, you can fuck up, but the people are still there to see you, and everybody makes mistakes, so that takes the nervousness away a little bit. The first time I was in front of a lot of people, I almost peed my pants, but I think that’s natural, you get used to it.

AllMusic: After a set, do you focus on how it went or do you go straight to thinking about the next one?

Garrix: I have so much adrenaline, I can’t sleep for the next three hours if it was a really good one, so what I do very often after is I watch Instagram videos, I look at pictures from the show, if it’s been live-streamed I watch the complete livestream of my whole set right after my set to see how it was. When I’m onstage, I know what I’m doing, but I don’t really realize what happens. After I get offstage I can say, “Oh fuck, that was sick.”

AllMusic: What's your favorite thing to see when you look out into the crowd?

Garrix: People who don’t know each other acting like they've know each other for like 10 years, jumping together, partying together. The nice thing about music is you get to create moments for people by doing what you love to do, moments they’ll remember for the rest of their lives. You see people crying, making new friends, and it’s one big family over there. Not only house music, but that’s the general power of music. To witness that while you’re onstage is amazing, and definitely my favorite thing to see.

AllMusic: Who has created those kinds of moments for you?

Garrix: Swedish House Mafia. I was at their show in the Ziggo Dome, and I literally almost was crying out of emotion, I was there with my friends, the fireworks, the productions, the visuals, the vocals, they played “Don’t You Worry Child,” and you stand there, cheering the lyrics along with your friends, getting goosebumps, it’s an indescribable moment.

AllMusic: Did you hug strangers?