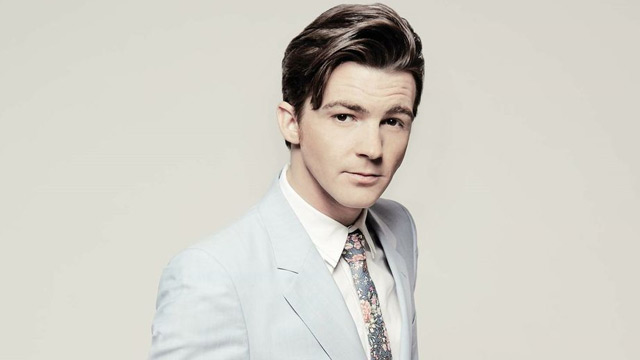 He's known to millennials as half of the hit Nickelodeon show Drake & Josh, but 27-year-old Drake Bell has set his sights back to a passion that dates back to his childhood: his affinity for hot rods, pin-up girls, and rockabilly music. His new album, Ready Steady Go! is out today, and features 12 tracks of impassioned and clearly reverent rockabilly. It's a leap from Bell's two more pop-oriented albums, but the evident respect for the source material - and accompanying images of a very young Bell slicking back his hair and holding a Gretsch - give the impression of an entertainer finally being allowed to make the music he's always wanted to.

We spoke with Bell about where his passion for this music came from, songs that make him flash back, and the guitar legend he loves but would never attempt to emulate.

AllMusic: Listening to the new record, it's very apparent that this music and the style that goes with it are things that you've always found appealing.

Drake Bell: I didn't even know when I was 10, 11, 12, that there was this thing called rockabilly music. I was watching this commercial for a "best of the '80s" CD or something like that, and it was all these hair bands and I’m like, “Whatever.” Then this band comes on, and they have pompadours and tattoos, they’re doing this cool '50s music with an edge to it, and I was like, “These are the coolest guys, they look like Elvis, but it says 'best of the '80s,' who was doing this stuff in the '80s?" So I went into the living room and said to my dad, “Hey, have you ever heard of this band called the Stray Cats?” and he was like, “Oh yeah, that rockabilly band from the '80s." We lived around the corner from a Tower Records, so I went there and bought a best of the Stray Cats. I was already into hot rods and pin up girls, but I was like, “That’s a '50s thing, no one is doing that now.” At that time Brian Setzer was coming out with his big band orchestra and the swing thing was becoming more prevalent, and I was like, “Wait, other people are into this type of music I've been listening to in my bedroom that I thought only old people listened to? This is awesome.”

AllMusic: So where other kids may have been using hip-hop or metal to fuel their sense of rebellion, you went back in time instead.

DB: The music itself was a rebellion. If you look at the time when the Stray Cats came out, it’s the time of either punk rock or new wave, and then all of the sudden Brian Setzer is like, “I’m going to put grease in my hair, buy an old hot rod and get the old Eddie Cochran/Chet Atkins Gretsch and wear my clothes all '50s and go to high school that way," while everyone else is dressed like punk rock or Flock of Seagulls. That was a complete rebellion, they revived this whole genre of music by rebelling against what was happening on pop radio at the time.

AllMusic: You made the record with Peter Collins, who has had a very diverse career - he's made records with Rush, Air Supply, Suicidal Tendencies and the Indigo Girls. What about the diversity of your taste, do you have extremes you move between?

DB: For sure, I’ll listen to Vulgar Display of Power, I’m into Pantera. The only thing I can’t get into is gangsta rap. I grew upon the beach with surfers, so we were listening to Sublime, and the hip-hop culture just doesn't resonate with me. The monotonous beats just get like, "OK, where’s the musical change, where’s the interesting musical choice you’re going to make here?" There’s some old school hip-hop that is really clever and cool and musical. But mostly everything else, I go from everywhere to Helen Kane and Al Jolson.

AllMusic: But you never had the interest in getting a Dean guitar and a bunch of Metal Zone pedals and sounding like Dimebag Darrell.

DB: No way. I loved him and Zakk Wylde growing up, but I was more attracted to finding a vintage tape echo and getting my Gene Vincent/Eddie Cochran sound. I was at NAMM a year or two before Dimebag died, and I got to stand two feet from him and watch him hang out with people and shred on the guitar like a beast and just be the nicest dude to everyone that walked up. I couldn't believe how approachable and how cool this dude was, and then he’s in a band that when they’re onstage, it’s just like…I couldn't imagine getting onstage and being in a band like Pantera, my face would melt. When you win Grammys for your guitar solos, you’re a badass.

AllMusic: So as a kid you were obviously into some things the other kids might not have been into. But were you also into the music that was coming out at the time?

DB: I did listen to some contemporary stuff, and today there’s contemporary stuff I listen to, but most of my catalog is classic. I guess No Doubt was a big one, I loved No Doubt growing up, Weezer was a huge influence growing up, those are two bands that I really thought were awesome. Growing up in Orange County, I really loved the ska music scene. So there was a lot of contemporary music I was listening to, but what made me feel cool was coming to school and being like, “Oh, you guys don’t know who this guy is? Check this out,” or coming to school and talking about the new vinyl I’d bought. I was excited to go to the store and pick up a Chuck Berry record and go home and listen to the songs that hadn't been released on CD. My thing was finding what the contemporaries were influenced by. I’d say, “I dig Rivers Cuomo's writing, who did he listen to?” Then you find out what eclectic music these artists you’re influenced by listened to – who did John Lennon listen to, who did Hendrix listen to, and you just dive back and back and find all this incredible music.

AllMusic: You referenced Weezer a couple of times - is there a particular Weezer song that takes you back to a specific memory?

DB: I grew up on the beach, so I grew up right in surf town, basically. My dad was a surfer, my brother’s a surfer - I grew up barefoot in the sand. So when I hear “Surf Wax America,” the lines "The sea is foaming like a bottle of beer/The wave is coming but I ain't got no fear," and "You take your car to work, I'll take my board," that’s my childhood right there.

AllMusic: Is there a song you can think of where every time you hear it you say, "This song is perfect."

DB: "In My Life" by The Beatles. I don’t have a memory of hearing it for the first time, but that song has always been a perfect song. When you hear a song and you go, "Man, I wish I’d written that." It really resonates with growing up and coming of age, discovering yourself and being a teenager. I was reading an interview with John Lennon and they asked, "When did you feel your songwriting change?" and he was like, "When I wrote 'In My Life.'" That was the first song where he said, "I don’t just write 'I love you, you love me,' 'From Me To You,' 'P.S. I Love You,' 'I Want to Hold Your Hand,’ this is a song about life." It’s just beautiful, and George Martin’s piano solo, it’s so awesome. That was around the last time they really sang together, after Rubber Soul it was like, "This is a John song, this is a Paul song, he’s the lead singer on this song." You know that "Happiness is a Warm Gun" is a John song, "Blackbird" is a Paul song. But when you hear "Hard Day’s Night" and the other ones, it’s like, "Wait, who’s taking lead, now John’s singing the bridge…"

AllMusic: What's another song from when you were younger that makes you flash back?

DB: There's something about hearing a song that connects you to a certain day, songs like Marcy Playground's "Sex and Candy," that puts me in my sixth grade classroom, looking at the girl I had a crush on. Talk about instantly putting you back - it's like how they say smell is the greatest sense tied to memory, you smell something and are like, “Whoa, I’m back at the amusement park when I was 12 on the Matterhorn on that one ride," just because I smelled hot cotton candy or something. That’s how that song is, as soon as it comes on, I’m like, "Whoa, I’m back in Newport Beach In the sixth grade sitting in class."

AllMusic: I was always obsessed with the ridiculousness of the phrase "Like disco lemonade."

AllMusic: So it's not necessarily a favorite of yours.