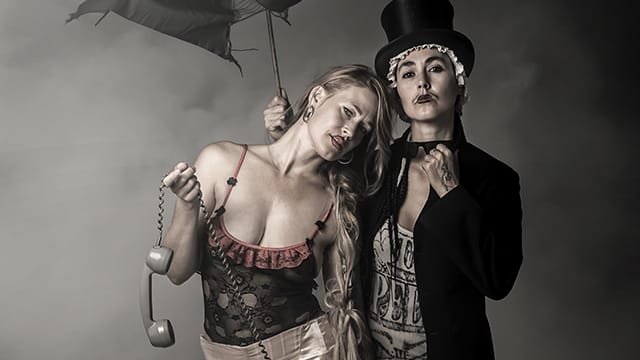 Sister indie pop duo CocoRosie heads to the roller rink in the new video for the band's latest track, "Restless." The song comes from Put the Shine On, the band's first album in five years, and finds Sierra and Bianca Casady flashing back to memories of their childhood refuge.

Sierra, who takes lead vocals on the track, spoke with AllMusic about why the roller rink matters to them, the unexpected transformation that mutated the tone of the song, and how their recording techniques caused some consternation when the owner of the recording studio paraded some guests through during one of the album's sessions. Put the Shine On is due out March 13 and is available for preorder.

AllMusic: Did the two of you come up with the video's concept together?

Sierra Casady: Music videos are not an easy feat, they can be so challenging, to try to fit a picture to the sound, it's almost impossible. I think we wanted to have some fun and spend time on skates and just goof off a little bit, and create something that was kind of like a home video feel, down home, just a worn-out blue jeans vibe, to meet this song, which has a little bit of a sad story. There's almost a bit of a country feeling to this song, in a way. I think it brings something that was a lot lighter than the last music videos that you've seen, and is something people probably weren't expecting.

AllMusic: You seem comfortable on skates, did you grow up skating?

AllMusic: Were there specific references you wanted to make in the video?

Casady: It's more about hanging tight with girlfriends at the roller rink at that time in our lives, as a refuge to get away. At that specific time, we were living in a suburb where shit was going down, and it was kind of like going to church, in a way. It was another world.

AllMusic: What kind of shit was going down?

Casady: There was so much action on our block, we lived on a block with like 100 families, packed into this one loop, and every single house had so much going on, it was just gnarly.

AllMusic: Getting to the song itself, what was the genesis of that?

Casady: It was about the story, it was about having your heart broken enough times that it becomes a habit, and the tendencies that humans can create as a result of trauma, and that song, along with a few other songs on the record, explore walking that line, of mental illness, what that feels like, and the music and the melody hint at transformation and empowerment, so it's not pinning you right to that story of someone losing it, but rather exploring that and maybe how to get out of that and where to go.

AllMusic: The end of the video gives me the feeling that no matter what she's been through, she's going to be OK. Am I reading that right?

Casady: We didn't have an intention there. Originally, we were exploring the story of a girl, and for us, there wasn't a lot of hope, but in the process of taking that and putting it to music and beats and having fun and jumping on the piano and singing together, just hooting it out, in that process, that's where the transformation, the light, possibly came, which is a pretty cool part of our experience with music, and that happens often. We'll be dealing with some heavy material, and in the process, something else happens. I can't exactly explain what that is, but I want to say in the beginning, there was something more heavy.

AllMusic: When you notice that transformation is happening, are you able to acknowledge it with each other or would that break the spell?

Casady: If I was working with anyone else, there's something about breaking spells and protecting the space or keeping a mood, but when I'm working with my sister, you can't break the mood. Can you break the mood when you're working on your own? You can't, because you're in a solo space, and it's almost like that when we're working together. We don't have to talk a lot or explain stuff. We grew up together, and although we took some time apart, we live and work together as adults, and there's so much there. Getting into our own bubble and working on music, that's such a zone. So on this song, at the beginning it was a little depressing, there was a mood, and we started having fun with it, and there was a feeling of release. I think this song spells that out really well, and that process for us, that space, it's almost like working alone.

AllMusic: If an outsider were to watching you create, would they be confused?

Casady: I think it can be pretty weird. I'm flashing back to where we made most of the record, which was in Texas at the Sonic Ranch, and we brought our engineer, who allows a lot of space for us to feel like we can have our privacy. Then the owner of the Sonic Ranch comes in, he wants to tour some people through, and he says, "Mind if we come in?" but we were in the zone, we were naked, or had our tops off, and we were working on "Did Me Wrong," which is this slam rap thing, and they were pretty shocked when they came in, just us jumping around with our tops off in the vocal booth. We're not shy with each other. So it can be pretty touchy, and we hardly work with anybody, we're very selective. It can be an intense process.

AllMusic: You can see Mexico from that studio, right?

Casady: Yeah, and the wall goes right through the pecan ranch. It's intense. There's a vibe. There's a hole in the fence where people used to go through, so there's definitely a vibe at. As I look through the list of songs, I want to say that "Slow Down Sun Down" sopped up a little bit of that vibe, like meeting a lover in the hole in the fence at the border, it has that vibe to it.

AllMusic: Does "Restless" fill a specific musical role on the overall album?

Casady: I don't think we had an intention there, but it acts as some kind of relief from the rest of the mess.

AllMusic: What sort of mess?

Casady: We've got some emotional mess for sure on "Mercy" and "Lamb and the Wolf," talking about family issues and getting tangled in a web of facing schizophrenia. Everyone has someone in their family who's lost, and we're all affected by that stuff. So there's definitely some emotional mess, and also a mess of styles, crisscrossing eras with the sounds and the beats. "Lamb and the Wolf," I don't eve know when that's from, those beats are kind of early 80s, Sesame Street funky, and "Ruby Red Bass" has all kinds of samples, it has my mom singing the choruses, and my grandfather, who I've never met, we found a sample of his in my mom's archives, and he sings the bridge.