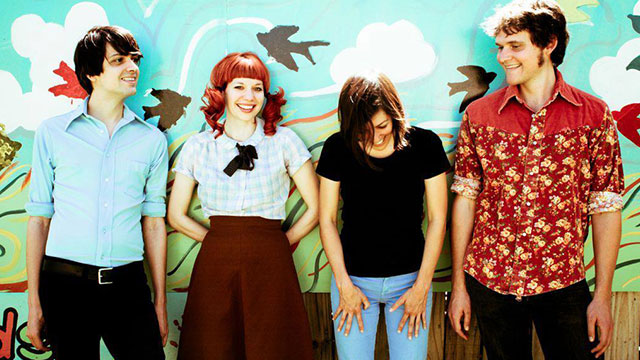 In our next course in Biomusicology, Austin-based psych-pop band Tele Novella (featuring former members of Voxtrot and Agent Ribbons) breaks down some of the songs and artists that have helped the band evolve to where it is today. Their debut seven-inch, Don't Be a Stranger, arrived late last year, and a full-length release is slated for 2014.

First, a pair of tracks from Tele Novella:

"Don't Be a Stranger"


"Umbrella at the Station"


Now, Natalie Ribbons (guitar, vocals) fills us in on the music that has guided Tele Novella's sound and growth.

"The Cranberries were the first cassette (or any format) I purchased with my own money when I was in 4th grade in 1994. Prior to discovering The Cranberries, I was primary exposed only to jazz and classical music, since that is mostly what everyone in my family listened to. Pre-Cranberries, I was influenced by a lot of 1940s female jazz singers and Chopin. This band sort of started it all, I guess."

"The Bee Gees pre-disco era wrote some amazing songs, and this one is one of my favorites. I was also generally influenced by a lot of the usual amazing stuff from the sixties - the Zombies, The Kinks, The Beatles - it is all woven into the fabric that makes up my music taste today."

"Billy Nicholls is delicious orchestral pop that stimulates my imagination. I would imagine that this song was about me because I used to stay up until 5 a.m. nearly every night and sleep in until 2 p.m. I lived a sort of time-warped and lonely - but creatively productive - existence for a couple years there."

"Fiona Apple was my first encounter with a female songwriter that shared the same general range as myself, so I could play her songs on the piano and sing along to them from beginning to end. She blew my mind when I was in seventh grade, and I have continued to respect and appreciate her music throughout her career. She and I both have deeper voices, so once I learned her songs, I felt that I could start writing my own. Singing along to her albums are what gave me the confidence to sing in the first place. Also, her lyrics are intelligent and poetic."

"Earth and Fire have some of the best and strongest vocal delivery my ear has ever heard. The chord projections wrench your heart out of your chest and everything feels otherworldly. I'm still trying to write a song like this one, to no avail."

"The Aislers Set is one of my favorite bands. Such amazing pop songs. The lyrics to this song are so great - funny and honest and vivid. I would love to be in a band that sounded like this!"

"I have been a little obsessed with this song for the last two and a half years now. I listen to it on repeat on long walks at night and get lost in it all the time. It's just so beautiful, I don't know what else to say about it."