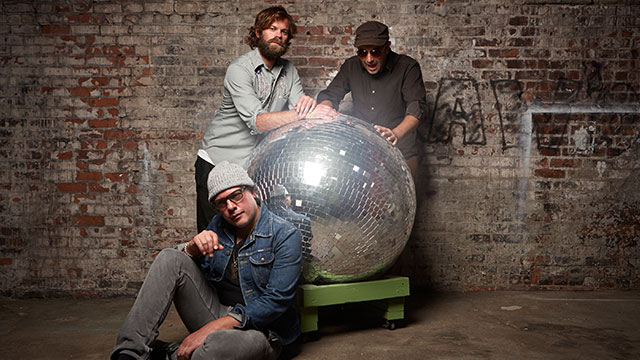 Next up in Biomusicology, two of the most respected songwriters in left-of-the-dial British music are embarking on a new project and digging into their back catalog to see how they got there. The band is Black Hearted Brother, helmed by Slowdive/Mojave 3 vet Neil Halstead and Mark Van Hoen, the ambient artist best known for his work as Locust and Seefeel, along with Nick Holton of sleepy electro-folksters Holton's Opulent Oog. Though the combination sounds unexpected, the guys' roots run deep; Van Hoen's work as an electronic artist in the early '90s contributed to Slowdive's late-career ambient leanings, and he helped produce most of Mojave 3's albums, as well as Halstead's solo album last year, while Holton and Halstead took turns contributing to each other's solo works.

And now there's Black Hearted Brother, where Halstead said that the idea behind Stars Are Our Home, their debut album just released on Slumberland, was to "just make a record that was in some ways 'unedited.' To not worry about a particular sound or style, but to just go with the flow". Sure enough, the album flows sonically from acoustic melodies to experimental indulgences, and lyrically from romantic to eccentric, while still keeping a foot on pop turf. Take "This Is How It Feels" for example:


Black Hearted Brother's biomusicology, compiled by Neil Halstead and Mark Van Hoen, features tracks from their prior projects, sharing a little history and looking back at how the past shaped the present:

Slowdive - "Crazy For You" (from Pygmalion, 1995)
Taken from Slowdive's final (and Mark & Nick's favourite) Slowdive album. Neil was at this point living in London with Mark & Daren from Seefeel, and they were all heavily into this type of music. Mark said more recently that Neil really nailed that sound. It was also during this time we all spent time hanging out in the house in London listening to music and laying the foundations of future collaborations.


Holton's Opulent Oog - "Rough Times" (from Love in the Mist, 2011)
A comment on the times, as with the rest of the songs from the Oog's second album -- the theme being hope and the realisation that there is salvation, if brief, in these dark times. The biggest production of what was generally a minimal exploration into music, like the middle eight and sweeping strings by Roger Proctor at the end.


Mark Van Hoen - "I Need Silence" (from Where Is the Truth, 2010)
Nick will never stop banging on about this album until it's a set-in-stone classic. One of Mark's only vocal outings is an amazing collection of dark, personal songs carried along with a large amount of wonderful analog electronics. Neil plays guitar on a few tracks including this one. Mark used it like fairy dust here and there to great effect.


Mojave 3 -" Bluebird Of Happiness" (from Spoon and Rafter, 2003)
Featuring all of Black Hearted Brother, this is taken from Mojave 3's most adventurous outing. Mark adds synthesizers and production, Nick backing vocals with his partners from Coley Park, Kev Wells & Nick Portnell. Like BHB, it was recorded on tape but for the first time on a Mojave 3 record, it features a large amount of editing and production on Pro Tools.


Holton's Opulent Oog - "Oaki Room" (from The Problem of Knowledge, 2008)
From Holton's Opulent Oog first album, which was an exercise in ease after several difficult albums. Each track was not laboured, but rather recorded very quickly to tape at the studio from which this track get its name.

Seefeel - "Blue Easy Sleep" (from Seefeel EP, 1993)
The track that first defined the Seefeel sound, recorded in 1991. A simple drum loop and dub bassline by Mark Van Hoen, and a wall of otherworldly guitars by Mark Clifford.


Slowdive - "Slowdive" (from Slowdive, 1990)
Slowdive's demo for a competition in Melody Maker -- if you won, you won a contract with Creation Records! Well, not really. But it was Slowdive's first release, and a single of the week in MM. Neil wrote this after a trip around Europe when only 18.


Coley Park - "Devils Tree" (from Rhinoceros, 2007)
Rhinoceros was an attempt to cover all the aspects of Coley Park, who had been recording for 10 years. It was with Coley Park that Nick learnt his production and songwriting craft. Neil would often be present at recordings, as would Coley Park at Mojave 3's. NME called Rhinoceros their masterpiece.

Mark Van Hoen - "Real Love" (from Playing with Time, 1999)
From the album often cited as a favourite by fans & critics. Female vocals are layered, cut up and glitched to create a warm and timeless electronic music.


Purchase Stars Are Our Home via Slumberland Records or iTunes.

And get an introduction about the album from the band:


But wait -- there's more! We're also giving away a copy of Stars Are Our Home on white vinyl and a poster of the cover. Here's how to enter:

On Wednesday, November 6 we'll draw the winner at random from our Facebook fans, Twitter followers, and mail-in entrants who shared, retweeted and posted.