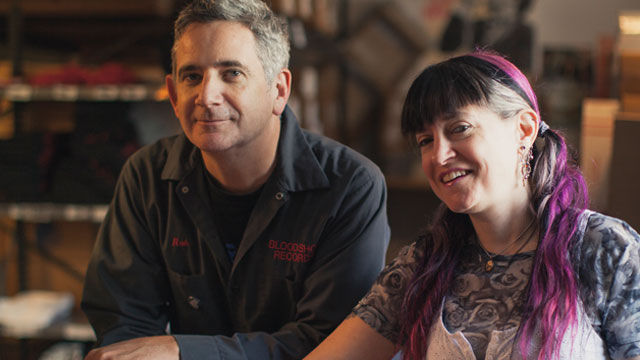 Record labels have had a rough go of it lately, which makes it all the more enjoyable when one gets to celebrate a milestone. This year, Chicago's Bloodshot Records, noted for being a leading force in the alt-country genre and have put out music from the likes of Ryan Adams, Neko Case, Graham Parker, the Old 97's and Alejandro Escovedo, gets to celebrate its 20th anniversary. The label is commemorating its first 20 years with While No One Was Looking: 20 Years of Bloodshot Records, a two-disc compilation of a wide variety of artists covering songs from the Bloodshot catalog. Our Mark Deming gave it four stars, writing that "nearly every tune here is a winner that can be interpreted in a variety of ways."

Label co-founder Rob Miller passed along a list of his favorite tracks from the Bloodshot's history, along with commentary on what makes the song special and how it reflects the label's goals. And don't forget, While No One Was Looking: 20 Years of Bloodshot Records can be ordered here.

Waco Brothers - "Death of Country Music" from Cowboy in Flames

Rob Miller: I first heard this song in one of booths in the back room of the Beat Kitchen in Chicago. Singer/guitarist Jon Langford, already a perpetually upbeat, effusive kinda guy, was positively giddy. He had just scribbled down these lyrics and had to show them to somebody. A wobbly, pagan summation of what Nashville has to country music, leaving it to wallow in a "deep black pool of neglect." Half pub sing-along, half damning indictment, it is as relevant today as it was when it came out—perhaps moreso.

Miller: On her first record, The Virginian, Neko was intro'd to the world as a smart-mouthed, neo-Patsy Cline honky-tonk siren with a gorgeous gift of a voice. This album, well, stopped me in my tracks, literally. Driving around the North Side of Chicago one day with the finished mixes, I got to this song and had to pull over. The soaring, haunting Middle Eastern-inflected title track still makes the hairs on my neck stand straight up. For me, it marked the start of Neko's path as artist, rather than interpreter.

Miller: While picking a "best" Robbie Fulks song is a fool's errand—the guy writes classics more often than I shave, and I'm sure he'll be pissed I picked this one, I do so because of the great consternation it caused. Much was (and still gets) made about what a stick in the eye of mainstream Nashville music we are. The thing is, Bloodshot formed more out of a hatred of what Silverchair, Everclear and Seven Mary Three were doing to the notion of "alternative." That's our dirty little secret, what drives us. It was always shitty rock music, shitty mainstream country never figured into the equation. And Robbie's gifts transcend genre.

Miller: While not my favorite track on this outstanding and fascinating album of Aboriginal Australian country music, it is one of the most deeply affecting songs we've ever been privileged to release. It tells the story of Aboriginal children who were taken from their parents to be "civilized." While such barbarities sound like relics of history, this practice continued in Australia until the 1970's, and Roger's mother was one of those children. We were fortunate enough to travel to Tamworth, New South Wales, to record the album and Roger repeatedly broke down during the song—nor was there a dry eye in the studio. Powerful, important music about the resilience and humanity of a long oppressed people.

Miller: "Oh Lord, can we do this?" thought I when I first heard the early mixes of Lydia's BS debut in a hotel room on my way to SXSW. I mean, I've met Steve Earle, he's recorded compilation tracks for us, he sired one of our artists, I loved his first few records. Can we really put out a song slagging him, albeit in a really clever way? A few panicked emails to her and her manager soothed my nerves; it's not about him—it's about a quasi-stalker of hers that fancied himself a Steve Earle-caliber dude. Whew. One of the strongest debut albums we've ever released.

The Unholy Trio - "Bring the Noise" from Down to the Promised Land: 5 Years of Bloodshot Records

Miller: We had just finished sequencing our opus two-disc, 40-song celebration of somehow staying in business for five years, and we got a rather crude demo package from the Unholy Trio. We honed in on this cover of Public Enemy and were (and remain) slack-jawed by it. It is some deeply demented backwoods freak-abilly. Drink from their jug, friends. You may never be the same.

Miller: Why wasn't there more music about how shitty things were under Bush II? Jesus Christ, I cut my teeth in the Reagan-era hardcore scene when there was no shortage of rage in underground music. Maybe in the era of people burning Dixie Chicks albums and giant corporate sponsorships, artists were afraid of being tarred as "traitors" or some shit. Not Firewater's Tod A. "Hey Clown" is a pissed-off, eminently and irresistibly danceable horn-driven gypsy-punk hora about our 43rd president. It was just what I needed at the time. And still do today, really.

Ha Ha Tonka - "St. Nick on the Fourth in a Fervor" from Buckle in the Bible Belt

Miller: "This glimpse of brilliance is much better / than your long look at mediocrity." Quite simply, a perfect line. That doesn't happen often. While I realize the niche nature of a lot of the music we release, I find it insulting that Ha Ha Tonka are not famous.

Miller: Immediately after the release of this album, JTE had a rather public meltdown with his demons and addictions: tour cancelled, rehab, many questions on how he'd be when he finished treatments. His first public appearance was on Late Night With David Letterman. The BS office gathered at Delilah's (the Chicago bar that was the BS clubhouse in the early days) to watch the show with a mixture of apprehension, excitement and concern. Along with guest guitarist Jason Isbell, JTE knocked it out of the park with a triumphant and exciting performance of the best song written about NYC in decades. The whole bar cheered when it finished. I went outside and cried, I was so happy for him.

Scott H. Biram - "Wreck My Car" from The Dirty Old One Man Band

Miller: SHB's persona of a wild-eyed, feral over the top metal-cum-delta blues maniac is well founded. His wall of noise intensity and whiskey-driven dismantlings of roots music are positively intimidating and exhilarating. However, it was this quiet, restrained country weeper on his first album (and on the demo he gave us) that drove home for me that this guy can write a song. And, when the amps get turned off and the hangover settles in, it is the song that stays around. Most one-man bands are one-trick ponies. Not Biram.

Dex Romweber Duo - "Brazil" from Is That You in the Blue?

Miller: Maybe you know Dex from his ground-breaking days in the Flat Duo Jets (if not, shame on you). I do. When I once asked Dex where he first heard this, jumpy, jittery Xavier Cugat tune, he said "from a Tav Falco's Panther Burns album." It was the same place I'd first heard it. Sometimes in this racket, we get to work with our heroes (Exene Cervenka, Andre Williams, Jon Langford, Graham Parker, among others), and to find out we were getting damaged by some of the same records is pretty cool.

Kelly Hogan - "Rubber Duckie" from The Bottle Let Me Down

Miller: From our perpetually solid-selling album of kids tunes—that adults love as much if not more than the little ones—I personally asked Kelly to sing this, as it was my favorite song as a child. But what she did with this Bert & Ernie Sesame Street chestnut. For the kids, it's got squeaky ducks and bathwater sound effects—a perfect splashy singalong. For daddy, she purrs and coos and sings in a register that practically invites you into the tub with her. I've never looked at my rubber duckie the same way since.

Miller: Again, picking a "best" song by an artist of this caliber is inherently ridiculous. Furthermore, picking a cover when his own material is so remarkable may seem sacrilegious, but here I go. Recorded on the stage at one of our favorite clubs in the world Fitzgerald's in Berwyn IL, before doors opened, Alejandro and duet partner Kelly Hogan take this Velvet Underground song and stretch it out into the ether. A quiet, aching, meditative masterpiece, it's like watching a tear dry.

Miller: Known previously as a bratty gutter punk loudmouth rocker in the band Bare Jr, BBJ's first solo outing contained this Memphis-soaked, languid, heartbreak soul should-be-classic. That it is not widely known and embraced is further proof of the decline of American musical tastes. We should be collectively embarrassed.

While No One Was Looking: 20 Years of Bloodshot Records is available to order now.