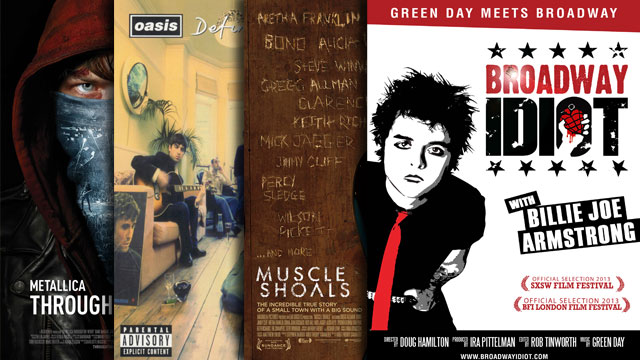 Every month we look back on the music-related documentaries and movies we've watched that are available to stream online. This time we cover the creation of a Britpop classic, how a punk rock concept album made it to Broadway, and the legacy of one of the most storied studios of all time,

When you sit down to watch the documentary Muscle Shoals (an exploration of the funky soul scene in Alabama starting in the late 60s), the first voice you expect to hear is obviously going to belong to Bono. That aside, the film is a loving and in-depth overview of some of the timeless music that came out of the FAME and Muscle Shoals Sound Studios. There are some engaging behind the scenes stories about the recording of Wilson Pickett's "Land of 1000 Dances" and "Mustang Sally" and Spooner Oldham's unexpected contribution to Aretha Franklin's "I Never Loved a Man the Way I Love You." Also worth watching is the tale of Duane Allman setting up his pup tent in the Fame studios until he got an audition to be a session player, and ultimately birthing the Southern Rock genre. There are some semi-hokey detours about Native Americans and Helen Keller, and producer Rick Hall recounts his hardships in excruciating detail (including a familiar-sounding Ray Charles/Johnny Cash-style story of the death of his brother), but Muscle Shoals ultimately tells how music became an unlikely ambassador for integration in Alabama during the Wallace era. (available via Netflix)

Even though it tries to pawn itself off as being a documentary about Green Day frontman Billie Joe Armstrong joining the cast of the Broadway adaptation of American Idiot, this movie is 95 percent about the creation of the musical itself, the band's input and involvement, and the journey of the cast as it progressed from idea to reality. Armstrong appears frequently throughout, but his addition to the cast for a run of shows only comes into play in the film's final eight minutes. The rest of the movie is packed with theater kids trying to approximate their idea of "punk," over-explaining the American Idiot plotline, and the band reacting to theatrical renditions of their material. Mawkishness aside, there are musical moments that can cause chills and highlight the richness of the source material, like the huge choruses of "21 Guns" and "Holiday." But despite its setup, Armstrong's contributions to the film feel more like a cameo than a starring role. (available via Netflix)

Metallica: Through the Never

There's no shortage of footage of Metallica in the Death Magnetic era, from the Big 4 collection to Quebec Magnetic to a release from a series of shows in Mexico. Another straightforward concert film would have felt like overkill—which it might be already—so for the band's theatrical debut, they combined a live set with a loose narrative about a roadie on a barely-defined mission. These sequences are purely atmospheric and convey no actual story beyond the imagery itself, the pace of which coincides with the peaks and valleys of the songs the band is playing. The performances are fairly standard in Metallica terms, there aren't any setlist surprises, and the band reprises a handful of stage gimmicks from earlier live releases—the falling scaffolding from Cunning Stunts, the collapsing Lady Justice statue from Live Shit—while adding in some electricity effects for "Ride the Lightning" and staging an intimate performance of the instrumental "Orion" in an empty arena as the closing credits roll. The band "acting" in the opening sequence is a definite highlight. (available via Netflix)

This hour-long feature on the making and legacy of Oasis' debut, Definitely Maybe, isn't new, but it's been getting pushed again recently to coincide with the album's 20th anniversary reissue, and has been made available in full via Vevo. It was made before the band splintered in 2009, so the use of present tense in discussing the band is a bit anachronistic, but any chance to hear Noel Gallagher talk at length is a delight, and it's fun to flash back to a moment when parkas were acceptable stage wear. There are a few interesting moments that delve into the album's creation, such as the debate over if the opening word in "Live Forever" should be "maybe" or "baby," and how the band couldn't stay out late and get drunk because they had to take a boat into the nearest town, and the rising and falling tides sometimes made the water impassible. Noel even gives a rare defense of his lyrics - which he usually derides - by getting philosophical about the line "We'll see things they never see," also from "Live Forever." Although it lasts longer than the album itself, it's a quick enough viewing for fans who don't mind a track-by-track revisiting of the classic album.