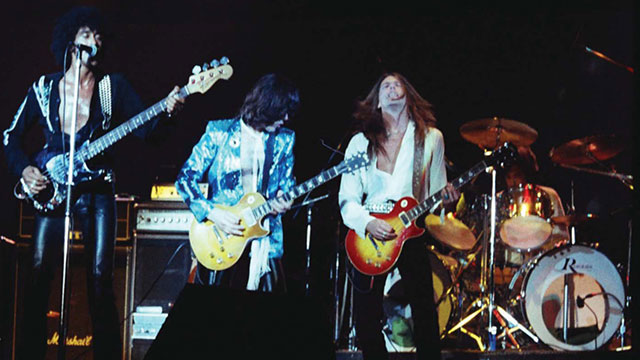 Hundreds of years from now, when historians look back at the wreckage of our culture and try to make sense of it, the idea of rock & roll may seem foreign to their highly evolved minds. If these scholars wanted a crash course on what it all meant, they could do a lot worse than listening to a couple Thin Lizzy songs. You see, Phil Lynott and his group had everything you could ever want in a rock & roll band. They had power, they had danger, they were ice cold. They were as tough as could be – they named an album Fighting – but they were tender underneath it. They told stories, they broke hearts, and Phil stole your girlfriend while he was punching you in the eye. You couldn’t hate him, though, because he did it with style and a wink. They wrote and recorded songs that were inspiring, romantic, hilarious, epic and heartwarming. They embodied everything good about rock & roll, everything about it that should live on forever, and we pay tribute to them today with a list of some of our favorite Lizzy classics. - Tim Sendra

Get the editors' picks in blurb and video form below and subscribe to the playlist on Spotify - and keep the music playing by sharing your favorite Thin Lizzy songs (more on that at the end of this post).

"Jailbreak"
One of the quintessential songs from their breakthrough album, "Jailbreak" is a thrilling distillation of everything that makes Thin Lizzy great. For all of his vocal chops, Phil Lynott was a remarkably conversational-sounding singer, and here he warns listeners of the escape that's being planned with so much intimacy that they can't help but feel like they're in on it. The track also captures how expressively, even gracefully, Thin Lizzy wielded their big sound: As rousing as that chorus is, most of "Jailbreak" simmers, with the band holding its firepower in check in a way that feels almost like the flipside to their best-known song, "The Boys Are Back in Town." When they finally unleash an assault of wailing sirens and Scott Gorham and Brian Robertson's churning twin guitar attack, it's easy to hear why Thin Lizzy named the rest of the album after this song. - Heather Phares


“Rosalie”
Touring every night with Bob Seger in early 1975, the band probably heard “Rosalie” every night and decided that with a little effort they could top his version. Seger wrote the song in 1972 about Rosalie Trombley, program director at the powerful AM radio station CKLW, probably in hopes of buttering her up and getting a hit. It didn't work – partially because she saw through it and wouldn't let her station play the song, partially because Seger plays it really slow and kinda boring. Lizzy give the tune a right kick in the bollocks by boosting the tempo, adding some trademark twin guitar power, replacing Seger’s growl with Lynott's strut and basically giving Seger's tune the kickass re-do it deserved. They basically changed it from a naked plea for airplay into a naked plea to get a girl naked, which is far more important in the R&R scheme of things. - Tim Sendra


"Whiskey in the Jar"
Outside of the occasional hip-thrusting hammer-on, Thin Lizzy, like "Whiskey in the Jar"’s ballsy highwayman, who pragmatically relieves a dandy military man of his coin with both a rapier and a pistol, plays it fairly straight, opting for tradition (albeit hair-teased and electrified) over skullduggery. - James Christopher Monger


“Dancing in the Moonlight (It's Caught Me in Its Spotlight)”
Reasons why this song is great:


"The Rocker"
Pre-dating AC/DC's tune of the same name, Thin Lizzy's "The Rocker," is a straight-up, balls-to-the-wall, what you see is what you get fist pumper of an anthem. Whether you listen to the shortened proto-punk single, or the full-length version off the band's 1973 album, Vagabonds of the Western World, which featured one of guitarist Eric Bell's most ferociously unhinged solos, "The Rocker" never fails to kick serious ass.


"The Boys Are Back in Town"
Yes. you've heard it a million zillion times and it sounds like a beer ad, but are you sick of it? Will you ever be? If you're a boy and you like drinking and you like hanging out, it never geets old. Or if you are a wallflower and don't really do those things, you can live vicariously through Lynott's pungent prose and tough guy pose. Plus, those guitars sound like a couple of low flying jets buzzing your backyard...super cool. This live version from a 1978 show at the Sydney Opera House shows off the live power of the band... -Tim Sendra


Phillip Lynott - "Ode to a Black Man"
Though the song comes from Lynott’s Solo in Soho album, this demo version absolutely slays it, bringing more attitude and grit than the smoothed out album cut. As a bonus, the song features harmonica from surprise Thin Lizzy collaborator Huey Lewis! - Gregory Heaney
https://www.youtube.com/watch?v=iv5_TOTu4yI

Listen to our editors' picks in playlist form, and keep the music playing by sharing your favorite Thin Lizzy songs, be they originals by the band or other bands covering them. Spotify users can contribute by adding AllMusic Editors to your people list, and then sending your selections to our inbox. Not a Spotify user? Share your track picks on the AllMusic Facebook page or by tweeting @AllMusic.