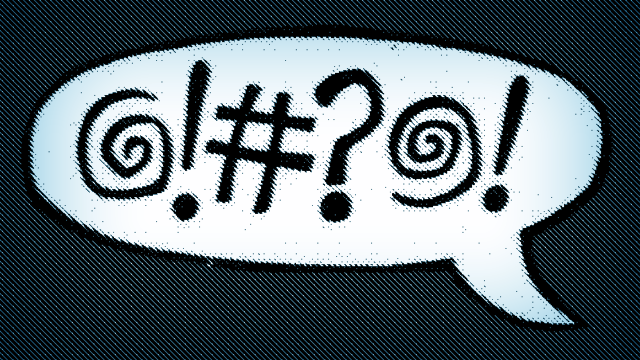 Ask someone from a past generation about the music made by the generations that followed, and chances are they'll say it's heavy on noise and short on message. While that's up for debate, there are plenty of songs out there actually driven by nonsensical lyrics, whether playing with slang of the times, sneaking in secret messages, or just expressing cool rhythms in a fresh way. This inspired our latest playlist, as we turn an ear toward songs whose lyrics may not be immediately clear, but we dig their sound all the same.

Get the editors' picks in blurb and video form below and subscribe to the playlist on Spotify -- and keep the music playing by sharing your favorite songs with nonsense words (more on that at the end of this post).

The Pied Pipers - “Mairzy Doats”
A fondness for setting nonsense syllables to music reaches all the way back to traditional folk songs, most literally in the case of "Mairzy Doats"' slurred words. Written in 1943, the track's lilting melody hints at a potentially Celtic background, but it's the lyrics that were inspired by an English nursery rhyme that one of the song's three writers, Milton Drake, heard his little girl singing in a blended-together way. Becoming such a hit that U.S. servicemen used its lyrics as passwords, this version of "Mairzy Doats" by the Pied Pipers adds a little swing to its playful bounce. - Heather Phares
https://www.youtube.com/watch?v=dpGFQbBfufI

Soul Coughing - “Disseminated”
Though the words in the song are all very real, “Disseminated” weaves them together to create an inscrutable tapestry of gibberish, showing that Soul Coughing mastermind Mike Doughty is a cut above most other lyricists, even when he’s saying nothing at all. - Gregory Heaney
https://www.youtube.com/watch?v=DHoqLffYGZc

The Chips – “Rubber Biscuit”
The granddaddy of all nonsense songs, "Rubber Biscuit" is a doo-wop novelty recorded by the Chips and later popularized by the Blues Brothers. That Dan Aykroyd and John Belushi chose to sing this bit of gibberish gives an idea of the absurdist humor but, naturally, the original feels like a transmission from another planet: part of it is the gritty immediacy of the recording, but so much of it is the playful interplay between the Chips. They're bouncing off each other, catapulting from delirious refrains to surreal asides and bad puns, jokes that just get funnier the more they're repeated. - Stephen Thomas Erlewine
https://www.youtube.com/watch?v=Hz0UvIZw-Y0

David Seville - “Witch Doctor”
The late '50s and early '60s were a golden age for novelty and nonsense songs, and one of the main artists responsible for their prominence, for better or worse, was Ross Bagdasarian Sr., best known for creating the Chipmunks. While "Witch Doctor" features the sped-up vocals that would soon give birth to Alvin, Simon and Theodore, the 1958 song is credited to David Seville, Bagdasarian's stage name (and who became the Chipmunks' dad/manager). Though the song isn't named after chorus' earworm-like bit of nonsense, everything else about "Witch Doctor" is textbook novelty song, from its yakety sax to its cranked-up chord changes to its squeaky backing vocals, which Seville used to create the Chipmunks later that year. - HP
https://www.youtube.com/watch?v=cmjrTcYMqBM

The Trashmen – “Surfin' Bird”
Not even the vile Family Guy using it as an easy repeated punchline can dilute the Trashmen's "Surfin' Bird" of its power. A landlocked surf band from Minneapolis, the Trashmen spliced two songs from doo-wop group the Rivingtons into this outrageous, unhinged rock & roll. The two songs, "The Bird's The Word" and "Papa-Oom-Mow-Mow" fit melodically, and their nonsensical lyrics are only heightened when joined, but it's the Trashmen's primitive stomp and Steve Wahrer's growl that makes this lunacy perennially intoxicating. - STE
https://www.youtube.com/watch?v=fruHQhNe-UM

The Exciters - “Do Wah Diddy”
Jeff Barry wrote this catchy little tune, and when they demoed the track Ellie Greenwich had some provisional nonsense words in there. They probably wrote so many songs that week that she was all out of words that meant anything. Long story short, the words stuck because they sounded so good along with the melody and beat. They gave the song to the Exciters to cut in 1963, but it was a flop. Manfred Mann covered it, and the rest is history. You’ve probably heard this song more than enough for one lifetime, but check out the original Exciters version anyway. - Tim Sendra
https://www.youtube.com/watch?v=FcVLIa0XGt4

Alvin Stardust – “My Coo Ca Choo”
One can only assume that the object of Mr. Stardust’s affection was super creeped out by this song. From the stalker-y rhythm to Alvin’s pleading lounge rat vocals, there’s a skeezy undertone to everything here. And really, "coo ca choo" isn't the most endearing baby talk nickname in the world... sounds kinda dirty, even. As long as Stardust wasn’t after you in all the wrong ways, though, this song is pretty amazing. Sample lyrics - “Tom cat you know where it's at/Come on let's go to my flat/Lay down and groove on the mat/Well you can be my coo ca choo.” - Tim Sendra
https://www.youtube.com/watch?v=se5VX-LAJAE

Bill Cosby & Quincy Jones - “Hikky Burr”
The theme song to The Bill Cosby Show (not to be confused with the later series, The Cosby Show) has Cos’ and Q getting funky with some good natured gibberish in what is possibly the best TV theme song of all time. - GH
https://www.youtube.com/watch?v=0GVcMTOPSxU

Frankie Smith - “Double Dutch Bus”
Chic couldn't get into Studio 54, wrote an expletive-riddled song about their experience, and hit number one after they cleaned it up. A couple years later, this Philadelphia International songwriter couldn't get a bus-driving gig, wrote a song about his rejection, removed some cursing, and had similar success. Neither a Jazze Phizzle Product-shizzle nor a track from Snoop D-O-Gizzle, this gibber-funk classic was also inspired by the jump-rope game and was laid down with help from Fat Larry's Band and some youngsters. Since it reached the top of Billboard's Hot Soul Singles chart in July 1981, it has been sampled or referenced by AMG, Snoop Dogg, Missy Elliott, and Hitman Sammy Sam. Raven-Symoné covered it a few years back but did not pay her funky bus fare. - Andy Kellman
https://www.youtube.com/watch?v=fK9hK82r-AM

Listen to our editors' picks above, and keep the music playing by sharing your favorite songs with nonsense words. Spotify users can contribute by adding AllMusic Editors to your people list, and then sending your selections to our inbox. Not a Spotify user? Share your track picks on the AllMusic Facebook page or by tweeting @AllMusic with hashtag #startmakingsense.