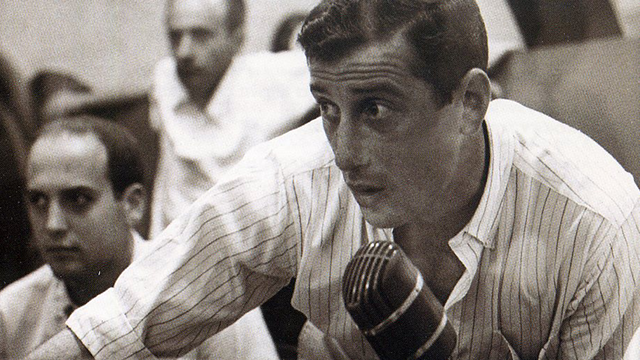 In the pantheon of contemporary American music, few have reached the commercial and creative heights of songwriting and producing duo Jerry Leiber and Mike Stoller. Together the two pushed the crafts of songwriting and production into then-unexplored places, from their beginnings in the early 1950s penning tunes for R&B artists like Charles Brown and Jimmy Witherspoon, to their Midas-like touch for creating hits that simultaneously captured the zeitgeist and transcended generational lines ("Jailhouse Rock", "Stand by Me", "Yakety Yak"), and their continued innovation, from starting the girl group-focused Red Bird record label, to making forays into Broadway and other corners of pop culture (American Idol, anyone?) that continue to influence music made today. On the 80th anniversary of Leiber's birth, our editors share their favorites from the Leiber & Stoller songbook, and we're eager to hear your picks, too.

Get the editors' picks in blurb and video form below and subscribe to the playlist on Spotify - and keep the music playing by sharing your favorite Leiber & Stoller songs (more on that at the end of this post).

The Coasters - "Yakety Yak"
The maverick songwriting and production team of Jerry Leiber and Mike Stoller brought pop music into the modern age with songs like the Coasters' "Yakety Yak," which used teen vernacular to perfectly capture the dilemmas of adolescence, and they did it all with warmth and good humor. - Steve Leggett


The Coasters - "Young Blood"
With the help of Doc Pomus, Lieber & Stoller crafted another song perfect for the Coasters' playful but raw brand of R&B. The flip side to 1957's "Searching," "Young Blood" is the musical equivalent of Tex Avery's Wolf meeting Red Hot Riding Hood -- it's all eye-popping, heart-pounding love (or lust) at first sight, and the way each of the Coasters repeats the last line of each verse just adds to its cartoony impact. While the song's lyrics are pretty innocent, the hip-swaying rhythm and raucous sax give the lie to them; "Young Blood" might be as goofy as the Coasters' other hits, but it's one of the group's sexiest songs. - Heather Phares


Chuck Jackson - "I Keep Forgettin' (Every Time You're Near)"
Despite being adapted by Michael McDonald (which was later sampled for Nate Dogg and Warren G's "Regulate"), as well as covered by artists like David Bowie and Ringo Starr, "I Keep Forgettin'" feels like a bit of a pop oddity, but its lurching rhythms and strange sense of drama give it the juice to stand up to the songwriting duo's more straightforward work any day of the week. - Gregory Heaney


The Drifters - "On Broadway"
A young Phil Spector played guitar at several Leiber & Stoller sessions. That's Spector doing the guitar lead in the original version of the Drifters' "On Broadway." - SL


The Groupies - "I'm A Hog for You Baby"
Leiber & Stoller wrote a whole bunch of goofy, novelty songs, mostly for the Coasters, but really it seemed like they could roll out of bed and whip up some silly phrase, splice on a simple hook and send it off to a great singer like Big Mama Thornton or Ruth Brown. Then British Invasion bands, and later garage rock bands, found these songs easy to play and popular with teenagers, so they all had one or two in the songbook. The Groupies came a little late to the game, 1966, with their reverb and fuzz cover of this Coasters track. It's pretty good, sounding snarly where the original was silly, and basically showing those Brits a thing or two about how to scuff up a classic L&S song. - Tim Sendra


Peggy Lee - "Is That All There Is?"
Just as ably as they captured freewheeling teenage fun and the grandness of being in (or out) of love in the '50s and early '60s, Leiber & Stoller nailed the world-weariness of the late '60s with "Is That All There Is?". Inspired by Thomas Mann's 19th century story "Disillusionment," the song's melody has a cabaret-like lilt to it that emphasizes its German roots as well as its sardonic outlook. While notable versions abound, "Is That All There Is?" really belongs to Peggy Lee. Her buttery vocals don't soften the disappointment the song finds in disaster, joy, love and death so much as give them richness and depth, and it's no wonder that in November 1969 it became her first Top 40 hit in 11 years. - HP


Elkie Brooks - "Pearl's a Singer"
Elkie Brooks' recording of "Pearl's a Singer," off her 1977 album Two Days Away, is another great example of how Leiber & Stoller began adapting their hitmaking talents to the changing pop landscape. A bluesy, countrified anthem about a bar room singer dreaming of the career she could have had, "Pearl's a Singer" was originally written and recorded by Dino & Sembello for their 1974 debut. In fact, Leiber & Stoller primarily rearranged Dino & Sembello's song, adding a bridge and then allowing for Brooks' big gospel-style outro. It was a top ten hit for Brooks, and a career breakthrough that, thanks to Leiber & Stoller, brought together all of her blues, jazz and rock influences in one song. - MC


Elkie Brooks - "Love Potion No. 9"
Leiber & Stoller were also game for reworking their early hits, as they did for Elkie Brooks with "Love Potion No. 9," also off 1977's Two Days Away. Originally recorded by The Clovers, the song is a high-concept R&B cut about a man who takes a Gypsy palmist's advice and imbibes a magical drink that causes him to become extremely amorous -- so much so that he famously ends up kissing a cop. As produced by Leiber & Stoller, Brooks' version is slow-burn funk jam that amplifies all of the song's mystical sexiness. - MC


Donald Fagen - "Ruby Baby"
While other versions of this pop gem by artists like Dion and The Beatles had more of a shuffling, country vibe, Fagen's take on the classic (from his solo album The Nightfly) has a smoother, more polished feel, highlighting not only how timeless Lieber & Stoller's songs were, but how their incredibly solid core made them surprisingly malleable. - GH


Listen to our editors' picks in playlist form, and keep the music playing by sharing your favorite Leiber & Stoller songs. Spotify users can contribute by adding AllMusic Editors to your people list, and then sending your selections to our inbox. Not a Spotify user? Share your track picks on the AllMusic Facebook page or by tweeting @AllMusic with hashtag #leiberstoller.