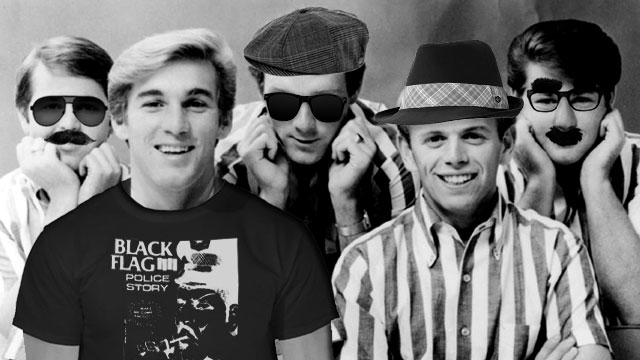 On this date 45 years ago, the Beatles first recorded "Helter Skelter". In contrast to Lennon and McCartney's yen for earworm melodies and intricate harmonies, this tune aimed to capture the band's most raucous vocals, loudest drums, and dirtiest feel. It was a risk, but it worked -- music historians credit the song as an influence on the development of heavy metal, with onetime AllMusic contributor Richie Unterberger calling it "one of [the] fiercest and most brutal rockers done by anyone". Inspired by this moment in music history, we bring you the latest AllMusic Playlist, where our editors turn their ears toward some memorable times when bands stepped outside of their signature sound.

Get the editors' picks in blurb and video form below and subscribe to the playlist on Spotify - and keep the music playing by sharing your favorite "breaking the mold" songs (more on that at the end of this post).

Cream - “Wrapping Paper”
Written by Cream bassist Jack Bruce with lyricist/poet Pete Brown, “Wrapping Paper” was chosen as the first single released by Cream, in October of 1966, and left both consumers and critics wondering what was going on. The power trio of Eric Clapton, Ginger Baker and Bruce were known for playing extremely loud amplified blues, but “Wrapping Paper” is devoid of that sound entirely. Upon release, critics found it a bit odd that Clapton had quit the Yardbirds the year before because they abandoned the raw blues arena and began playing commercial pop music. Clapton has mentioned in interviews that the song was a bit of a joke and that the band wanted to do something that listeners weren’t expecting. The track was also influenced by Cream’s genuine interest in the good time music of the Lovin’ Spoonful. While Cream would release other songs that were pop influenced (“I Feel Free”), choosing Wrapping Paper as their first single was an oddity and flopped upon release. - Al Campbell


Led Zeppelin - "Hot Dog"
Tucked away at the end of the first side of Led Zeppelin's final album, In Through The Out Door, is "Hot Dog," an overdriven country boogie that doesn't really fit in with the rest of the album – or maybe even anywhere else within the mighty Zep's catalog – yet it sounds entirely like Led Zeppelin. Most of that is due to Jimmy Page's exceedingly sloppy playing here, as he rips off solos and riffs that are too thick for the flimsy songs, squirrels away some country-ish B-String Bender grace notes, but Robert Plant's knowing Elvis Presley imitation also is one of his liveliest, funniest performances in Zeppelin. From here, Plant would pivot to the flat-out revivalism of the Honeydrippers , but "Hot Dog" is pure Zep, filled with loud guitars, light and shade, 17-year-old vixens, and the sneaking suspicion they've lifted parts of the song from somewhere else. At the very least, they didn't take anything from Buck Owens' "Hot Dog"... nothing but the title, that is. - Stephen Thomas Erlewine


Queen - “Crazy Little Thing Called Love”
Queen also jumped on the disco train, a little late, with “Another One Bites the Dust” in 1980. It’s wasn’t a huge departure because it still was dramatic, theatrical and punchy, like what you’d expect disco Queen to sound like. The real surprise on their album The Game was this goofy rockabilly song. It was pretty subtle and understated (for them), and apart from a little classic Freddie here and there, sounds like a different band entirely. My rockabilly loving 1980 self hated this song with a passion, because it was fake as hell and Queen were bloated AOR tools and why would I ever want to listen to this when I could spin Eddie Cochran or Gene Vincent instead? Man, I was hardcore back then. Now I realize that Queen had a couple good songs, and the wonderfully silly “Crazy Little Thing” is one of them. - Tim Sendra


Buck Owens/Corky Jones -"Hot Dog"
Back when he was a young buck, Buck Owens cut a couple of singles under the name Corky Jones. It was a way to preserve the integrity of his name while also hoping to score a quick buck – and if the hoped-for hit never materialized, Owens nevertheless released a riotous little rocker in "Hot Dog." Jumping and swinging and sounding a little bit like Carl Perkins, both in Buck's yelps and the lean guitar lines (which, truth be told, are a little leaner and more primitive than Carl's sinewy Stratocaster), Owens is a more than credible rock & roller, which may have been why he was the guy to truly electrify country and this stands as a nifty curiosity in his vast catalog. - STE


Harvey Milk - “Down”
Normally, Harvey Milk are an abrasive, difficult, depressing, and impossibly heavy band (and one of my favorites), but when they released The Pleaser in 1997, they showed off an entirely new side of themselves. Instead of the experimental sludge that made up their earlier work, the band suddenly became an unstoppable riff machine, embracing bluesy southern rock to make an uncharacteristically accessible album. – Gregory Heaney


Beastie Boys - ”Groove Holmes”
Beastie Boys fans in the ‘80s knew them as either a sophomoric punk band or a sophomoric rap trio, so imagine their surprise if they could’ve been fast-forwarded to 1992, when Ad Rock, Mike D., and MCA took up their instruments and played – soul jazz? On side two of Check Your Head, the noticeably laid-back and organ-heavy,“Groove Holmes” saluted one of the Hammond giants of the 1960s and ‘70s, Richard “Groove” Holmes. Appearing on organ was Mark Nishita aka Money Mark, making his debut on a Beasties record, although he would appear on many others – and have his own solo career with sessions released on Mo’ Wax, Matador, and Jack Johnson’s Brushfire label. The Beasties eventually did so many jazzy instrumentals that they were collected on their own album, The In Sound from Way Out, that made for the most offbeat record in a very offbeat discography, from a band that turned out to be a lot more adventurous than listeners would’ve thought after hearing “Cookie Puss” or “Brass Monkey” - John Bush


The Beach Boys - “Here Comes the Night”
As disco quickly took over the airwaves in the late ‘70s, many mainstream rock bands decided to jump on the bandwagon. Rod Stewart probably jumped the hardest with “Do Ya Think I’m Sexy”, but even a band as seemingly set in their ways as the Stones tried to cash in with “Miss You” and “Emotional Rescue.” The Beach Boys were commercially dead and buried in the late ‘70s, releasing a bunch of albums that were artistically all over the place and ignored by almost everyone. Maybe they saw disco as the perfect chance to update their brand and capture a whole new crowd of fun loving teens, so they called up their old friend and disco convert Curt Boettcher to help them out. Unlike some bands who merely dipped their toes into disco, the BBs jumped in fully clothed in white suits with a ten minute remake of a track from Wild Honey that’s super fast, super cheesy, full of amazingly dorky vocal harmony breakdowns, and actually a lot of fun, even if you really only need to hear it once in your life. Rumor is the same team did a disco remake of Brian’s favorite song “Shortnin’ Bread.” You might not need to hear that one. (Boettcher also did a pretty cool disco version of “I Can Hear Music” that’s worth a listen.) - TS


Ween - “Friends”
Given how eclectic their music is, it’s hard to say that Ween even has a mold to break out of, but for all the weirdness the band has laid upon us over the years, nothing was as surprising a departure as the EP version of “Friends,” a pulsing, late night dance track that feels more like it came from Ibiza than New Hope, PA. - GH
https://www.youtube.com/watch?v=aZbe4bQTTCo

Listen to our editors' picks in playlist form, and keep the music playing by sharing your favorite "breaking the mold" songs. Spotify users can contribute by adding AllMusic Editors to your people list, and then sending your selections to our inbox. Not a Spotify user? Share your track picks on the AllMusic Facebook page or by tweeting @AllMusic with hashtag #breakingthemold.